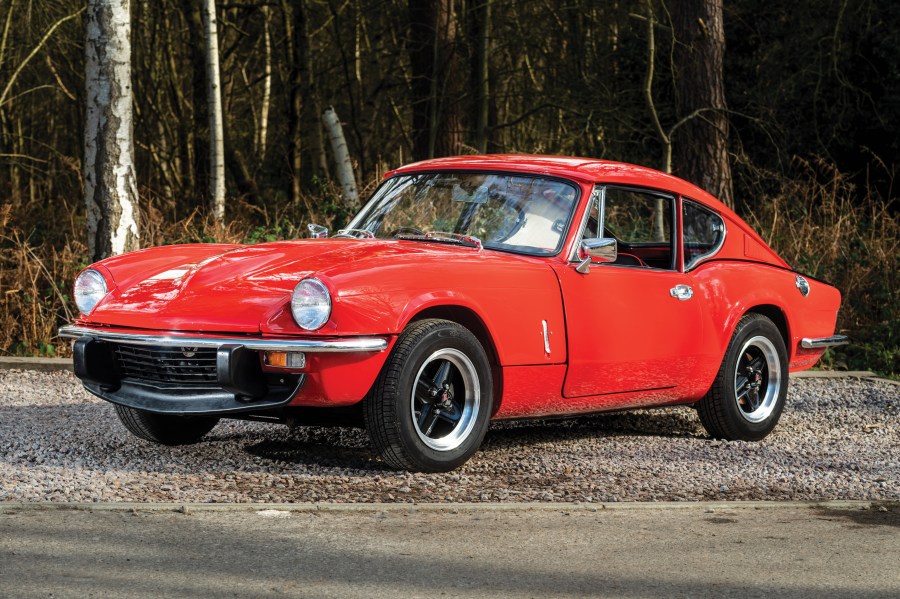 With just a roof, an engine, and some interior pizazz, the Triumph GT6 propels itself well above being just a fixed-head Spitfire

Some say that the Triumph GT6 is a sort of miniature Jaguar E-type. It’s true that it shares a lot of the same proportions and even some shapes with the classic Jaguar. The blend of sports car and luxury GT is also in there. But the first thing that comes up with the GT6 that bears a striking similarity to the E-Type is that it’s simply an event to start up, get in, and put your hands on the wheel. It’s that special feeling that separates the GT6 most from the Spitfire on which it’s based.

Of course you can see the unchanged profile of the Spitfire underneath the fastback roof. The car we have here is a Mk3 GT6, equivalent to a Mk4 Spitfire, as you’ll probably have already spotted from its slender chrome bumper strips supported with black overriders, front air-dam and Stag-like rear lights. The black trim bits and this car’s four-spoke Revolution wheels make a striking contrast against the red paintwork.

The roof really makes it though. It’s a great teardrop shape perfectly in proportion to the car to give it a suggestively rakish appearance, and it comes with supporting details too. The lip that channels rain away from the windows traces the roofline to the rear and gets lost beneath the rear wings.

This fastback effect is given greater emphasis with a piece of black trim following the top of the rear wing from the door back. Between these tapering lines are strangely shaped rear windows which flex over the rear haunches, then round up and away from the classic fastback C-pillars. While the standard GT6’s 155mm wide tyres and 13” wheels were unchanged from the Spitfire, this car sits slightly wider on 165mm tyres, helping its overall, more aggressive stance. The power bulge on the bonnet helps with that too.

Having carefully dipped your head to get into the GT6, you don’t easily forget the basic shape of the car. The long pontoon wings cast out in front of you, and that power bulge is unmissable. It’s a great view ahead, certainly suggestive of performance waiting to be exploited. The fastback shape is always apparent too, particularly with the rear window as large as it is, sloping a long way down in the rear-view mirror.

The interior itself is a step above the usual Spitfire fare, though still using that car’s basic layout. A rich walnut dashboard veneer makes a great effort to add a sense of luxury GT here and it just about succeeds, particularly with this example’s finely reupholstered interior. Neat red piping on the black vinyl seats is a nice touch, reflecting the exterior. You sit low, hemmed in by narrow bodywork and the domineering transmission tunnel in the middle. The gear lever is immediately to hand, the steering wheel presented at a good angle (adjustable for reach with an Allen key), and the pedals, while small, are easy enough to locate. 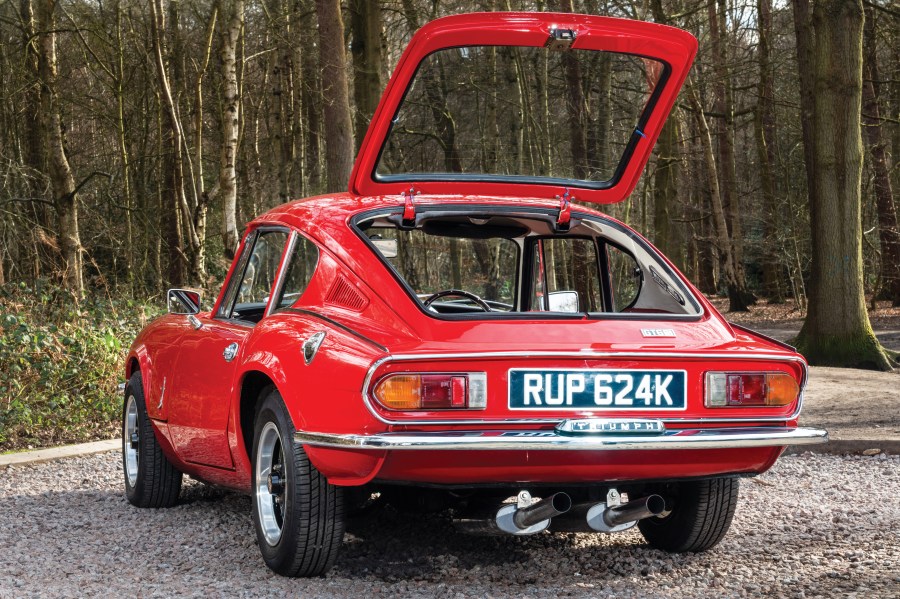 A tiny key goes into the dashboard and, with only a couple of turns, the engine fires into life. It can feel grumpy when cold, requiring strong doses of the choke, but once the water temp gauge shows signs of life, the big six begins to settle more calmly.

Except it’s not such a big six, at least by many standards today – at just two litres, it’s down a substantial 500cc on the TR6 engine with which it shares its block. Still, the GT6 deserves its muscly character, one that’s best amplified to dramatic effect with a stainless steel exhaust (which this one has). Even the very last Spitfires, with their 1493cc four-cylinder engines, never got close to the GT6’s outputs. Compare 71bhp and 82lb.ft against the original GT6’s 95bhp and 117lb.ft. The Mk3 we have here ups power to 104bhp.

With only 863kg to shift, the GT6 moves off with ease. Short shifting into second gear becomes habitual, and even before you reach the 3000rpm torque peak, you can slot in third while keeping a decent pace. Hold on a bit longer, however, and you’ll quickly get sucked into all the theatre and shove that this engine can deliver. With two Stromburg carburettors and a 9.25:1 compression ratio, it’s definitely keen to zip up the rev range.

What’s at first a bellow turns into a properly racy six-cylinder zing, although its pushrod valvegear and four-bearing bottom end begin to tell above 5000rpm. If you push, you’ll nudge the top of the 6 of 6000rpm, and wonder if you really got anything from it. Going up through the gears at a rate is good fun, there’s plenty of tactile snick in the selection and the ratios are closely stacked around the 30-70mph range. Going down the gearbox can be a little more tricky, with a tendency to baulk unless you assist the synchromesh with a blip of the throttle. Full synchromesh is standard, with overdrive on third and top as an option – it’s this that can take the GT6 well over 100mph.

With a weight balance of 56:44, it’s inhibited from having the delicacy of handling response to truly compare with an E-Type. However, there is the exciting feeling of sitting on the rear axle, and if you approach corners with a patient right foot, ready to power out from the rear it will reward with neutral handling. This is felt especially well because of sitting so low in the car.

It’s here that the GT6 gets close to feeling like an E-Type; if you get the corner right, you can lean on the rear axle and watch bonnet line up the horizon and lunge towards it. Get it wrong and you’ll probably find yourself frustrated with understeer. It can be a difficult thing to balance between the two, particularly with slightly slow steering (though nowhere near as bad as its 4.3 turns lock to lock would suggest; just see its incredible turning circle for the explanation). With practice, the GT6 can be a great car to drive. 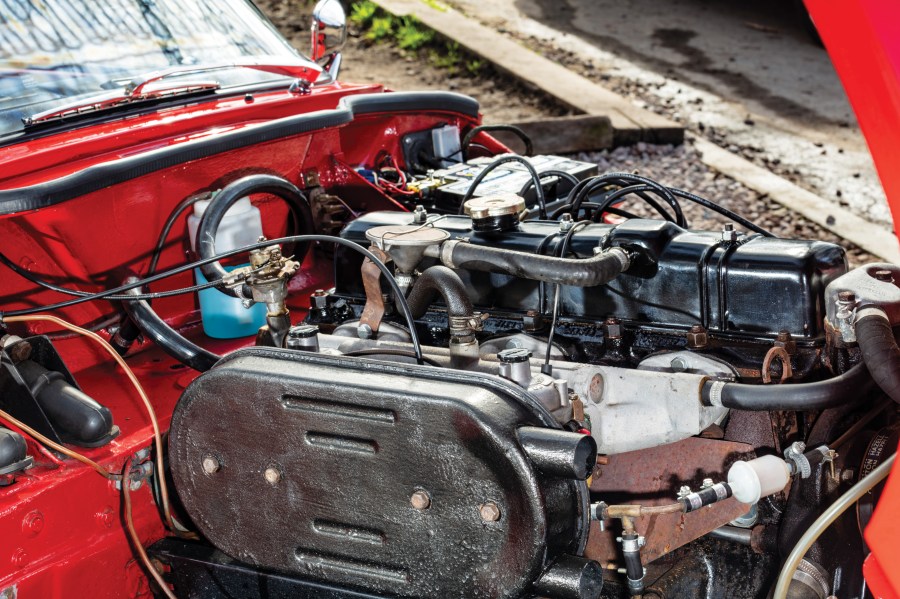 Learned GT6 fans will know that this being a Mk3 means that it has long ditched the sketchy handling of the Mk1. Even if you were the type to fly into a corner too fast and abruptly lift off, these days you can prevent a Mk1 from demonstrating its infamous tuck-in, positive camber behaviour at the rear and spinning you round. Suspension kits to tighten things up or change the geometry completely are easily fitted. Still, for years, there has been a wide birth given to the Mk1s owing to this issue.

There are other reasons why you might want to progress through the GT6’s timeline of Mk1, Mk2, and Mk3. Beyond the boost to 105bhp and the switch from wayward swing axle to wishbone-directed rear suspension, the Mk2 was given a raft of interior improvements that improve the GT6 considerably over the original. For a start, no longer is the cabin victim to heat from the engine bay; new vents in the side of the bonnet let out engine heat, and there’s a substantially improved ventilation system for the occupants. Sliding temperature and directional controls are much easier to use than before, plus there are a couple of fresh air vents on the dashboard. Anyone who’s spent time in a GT6 will know how valuable this is.

Ventilation is also improved with new air-vents cut into the C-pillars, and to make absolutely sure that visibility through the rear is maintained, a heated Triplex rear screen was made standard. To top it off, the Mk2 also got revised seats and door handles, making marginal improvements for general comfort and ease of use.

The Mk3 was perhaps slightly less of an improvement than the Mk2, but notable nonetheless. There are the visual updates we’ve already mentioned, and on the inside rocker switches replace toggle switches – mostly for safety concerns. A subtle change in the power bulge and a slightly deeper windscreen improved forward visibility – a criticism often levelled at the car. To go with not straining your neck so much, new reclining seats offered the same courtesy to your back. 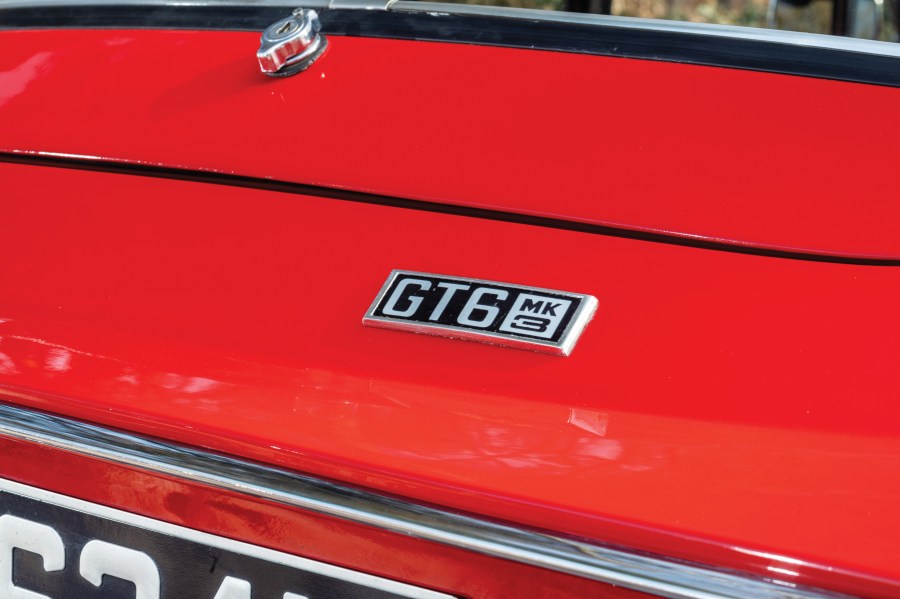 Objectively speaking, the Mk3 is the one to go for. But of course some will prefer the older models, not just for the larger chrome bumpers, toggle switches, and dainty taillights, but perhaps for their being the closest link to the original concept. It’s a great story worth mentioning in brief here.

The idea of a Spitfire GT was first explored in 1963. Michelotti, who had already done the Spitfire of course, was commissioned again by Harry Webster to produce this new fastback design. It appeared later in 1963 and immediately got a positive reception; the prototype gathered crowds whenever it stopped on its Turin to Coventry test run, and Triumph’s competition team even replicated it for aerodynamic advantage for their Le Mans racers. However, it was decided that the production model would be too heavy. It was shelved until the 1998cc six from the Vitesse came about and made the GT6 viable – with some creative engineering of course. Despite its flaws, the direct link with this story may appeal to some.

The Triumph GT6’s obvious rival is the MGB GT, not the E-type. But the reason why so many compare the Triumph to the Jaguar is that sense of occasion we mentioned at the start. The fact is that the GT6 is a miniature exotic. It’s got a firecracker of an engine, a seductive shape, and a great interior.

The things that you can do to improve the GT6 today quickly remove any opportunity to repute its elevated, exotic status, one normally reserved for cars twice its size (and price). The original prototype was bright red and drew crowds; it’s still got it.