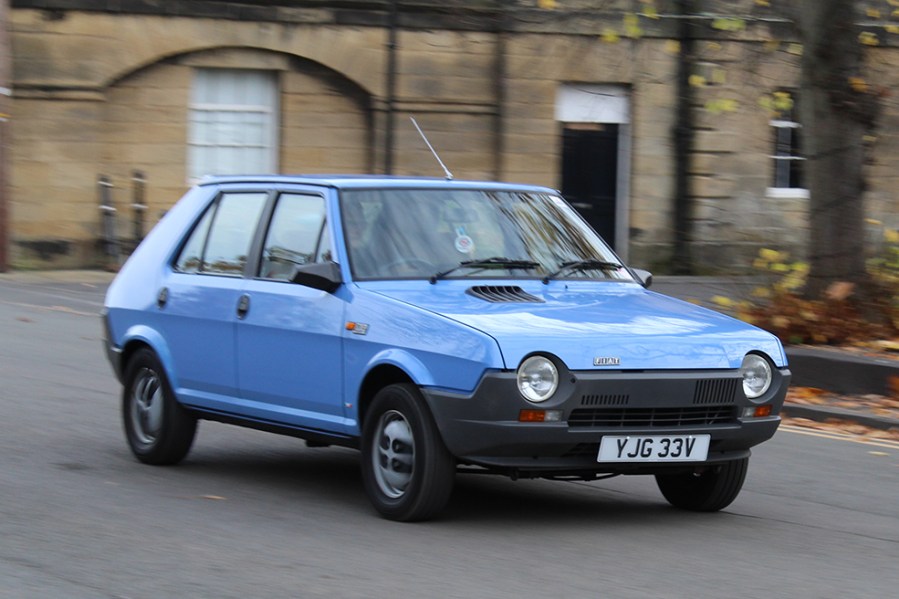 Famously ‘Handbuilt by Robots’, the Fiat Strada was a bold attempt at modernism in the late 70s. But is it now best left in the past?

As car adverts on TV go, it’s up there with the most memorable of all time. Lots of sparks and intelligent automotive machinery are set to a soundtrack of Figaro’s Aria from Rossini’s opera The Barber of Seville, before the advert ends on the simple caption “Handbuilt by Robots.” Sadly, that’s about the only way many will remember the Fiat Strada, as they are far from a common sight on our roads anymore. Fortunately though, we were lucky enough to get behind the wheel of a rare survivor.

Somewhat confusingly, the Strada was only known as such for the UK and North American markets. It was launched across Europe in June 1978 as the Ritmo – a word derived from the Italian for “rhythm,” while Strada derives from “road.” The first cars wouldn’t arrive on UK shores until May 1979, making the car on these pages one of the very first sold here.

The car was the brainchild of Italian car designer and engineer Sergio Sartorelli and was intended as stylish, futuristic-looking family transport to replace for the innovative but dated 128. Development began as early as 1972, with the car the first Fiat to be intended as a hatchback right from the start. Fiat already produced the 127 supermini in a three-door guise, but in the end it would be beaten to the small family hatch market by a number of European rivals, most notably the VW Golf launched in 1974.

The car was still innovative in many ways, however. It was among the first of its kind to employ the use of integrated plastic bumpers that also encompassed both front and rear ends of the vehicle, both housing and protecting the lamp units. Impact resistant at low speeds, these also helped give the car a low drag coefficient of 0.38. There was also a lack of recognisable grille, and the wheels were funky too. As modelled by our feature car, they may look like alloys, but are actually neat steels.

Most innovative of all, however, was what gave rise to that famous advert – the car’s automated construction. It was produced using Fiat subsidiary Comau’s “Robogate” system, a robotic production chain that automated the entire body shell assembly and welding process. Installed in the company’s Rivalta plant in Turin, it allowed production to reach up to 1200 units per day.

In Britain, it was seen as big thing – the television advert was unprecedented both for its length and the fact that its debut showing filled the entire advertising break in the middle of ITV’s News at Ten. The advert flew into popular culture, and a couple of years later became a target for the Not The Nine O’Clock News comedy show. Only this time, the cars were Austin Ambassadors at Cowley, and were “Handbuilt by Roberts.” It actually aired before the Ambassador was launched, too.

Somewhat unfortunately, the Fiat advert was shot during a strike at the notoriously politicised Fiat factory by workers who were protesting the job losses the automation promised to cause. In an effort to avoid national tensions, Italian adverts for the Ritmo avoided the issue of automation altogether.

But enough about the marketing campaign. Initially, two trim levels were offered, the C and better equipped CL, as were two body styles – three and five-door. You also got independent suspension and disc brakes up front. From a mechanical perspective, The Strada owed a lot to its 128 forebear, but carried its engines forward in a more refined, insulated fashion. In addition to the 128-derived 59bhp 1.1 and 64bhp 1.3-litre engines, a 74bhp 1.5-litre was added, as was the option of a five-speed transmission or a VW-sourced three-speed automatic on CL models. Models were designated 60, 65 and 75 in relation to their power outputs, but only the 65 and 75 were sold in the UK.

Despite the controversial looks, the Strada initially sold well and was runner up only to the Simca-Chrysler Horizon in the 1979 European Car of the Year Awards. Famed automotive journalist LJK Setright described it as “viceless” and praised it for being the most modern mass produced car in the world, but Top Gear’s Noel Edmonds was less enthusiastic, describing its dashboard layout with prominent clock as “absolutely ridiculous” and suggesting it resembled a young child wearing NHS specs.

The model timeline saw the introduction of a diesel version in 1980, while the 75 was replaced by the Superstrada in 1981. The same year also saw the introduction of the first sporty model, the 105TC, which was powered by a 1.6-litre Fiat Twin-Cam and sat on Speedline alloys. Only around five are though to remain on UK roads, but that’s still more than the 75CL Automatic that we drove, of which just two are thought to be licensed.

Our test car was set to be auctioned by WB and Sons at its December auction, and showed a mere 47,000 miles from new. Staking a good claim as the probably the most original 1979 car left, it was remarkably well preserved and gave us probably the best opportunity to sample a Strada as near as possible to what it would’ve been like when new. We weren’t about to push it to breaking point, but even so it would give us a good indication of what Noel Edmonds got so upset about over 42 years ago.

And it’s the car’s age that is probably the most surprising factor. The styling of the car looks fresher than its years, and despite being hard plastic, so does the dash. The 75CL gets a rev counter rather than the clock Noel was so angry about, and the basic controls are easy enough to work out. Indeed it felt like you could use it regularly, without giving much away in comfort or space compared to a modern hatch. Buyers in 1979 even got the luxury of an FM radio and an option radio cassette, though in this car a modern Blaupunkt unit had been fitted. The split folding rear seat meant useful practicality, too.

Out on the road, the ride was not too soft but surprisingly compliant, soaking up the speed bumps around the local residential area with relative ease. This was aided by the seats; early road testers complained of how they would quickly sag, but 42 years on, this 75CL’s perches bucked the trend by remaining taught and comfortable, with only a slightly droopy headliner to indicate the car’s advancing years. The steering was a little heavy at low speeds but well weighted and direct at higher speeds, while the brakes were more than adequate. There was a bit of body roll evident on the many roundabouts surrounding WB’s Newcastle premises, but plenty of grip meant it clung on willingly.

The engine was nowhere near as vocal as expected, which is down to greater levels of sound deadening that the 128 was blessed with. That said, it wasn’t particularly quick. Despite having the biggest engine of the cooking models, the 75CL is merely adequate for modern traffic. In five-speed manual guise, the 1.5 motor is set to be good for 99mph and 0-60mph in 13.1 seconds, as well as being able to cruise at 80mph while doing a modest 4000rpm. However, the three-speed VW automatic, while smooth, does rather blunt things, knocking a few mph of the top speed and a good two seconds off the 0-60 time. For a small 1970s automatic it’s not bad at all, but the lack of manual box means a bit of fizzy Italian character is lost.

In any case, the sporty stuff is really the preserve of the later twin-cam models. This is car for relaxed cruising while the rest of the world marvels at its rarity. Indeed, most of the fun is in admiring the cool details, such as the round door handles, the sharp wind-cheating Cromodora door mirrors, the offset bonnet intake and the little upward kink at the rear of the roof. 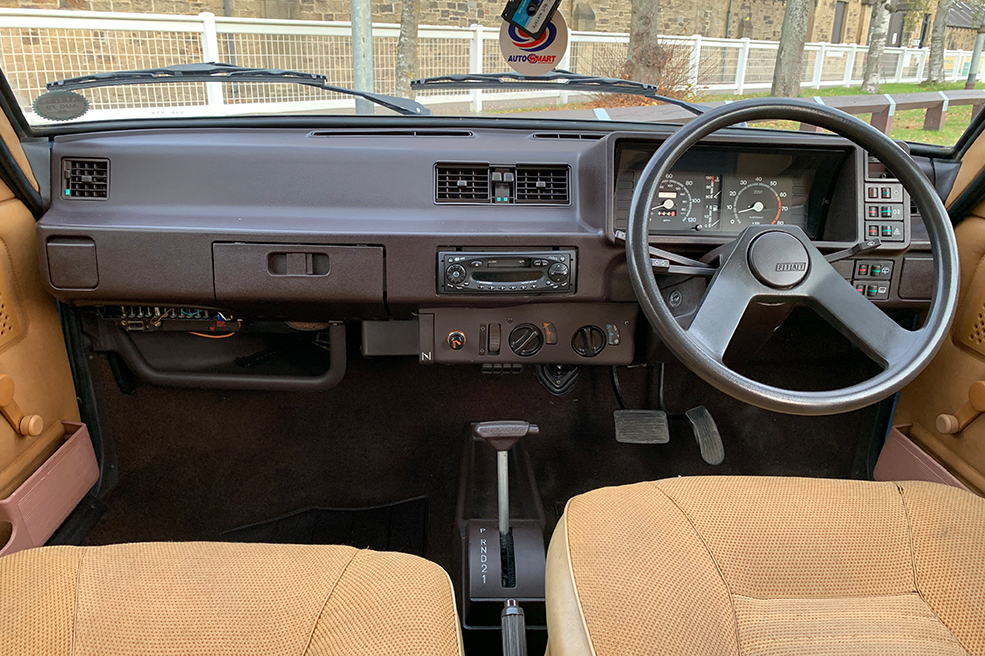 Sadly, the Strada’s unique looks were part of its downfall. It initially sold well, but what was cutting-edge in 1978 aged quickly. In October 1982, amid flagging sales, it was facelifted to compete against new rivals like the Mk3 Escort and Vauxhall Astra. As well as the arrival of a right-hand-drive Cabrio for the first time, there was now a separate grille with integral headlights and the tail lights were mounted onto the body rather than as part of the rear bumper. The bonnet scoop also went, as did the kinked roof in flavour of a flat one. It was more refined, but the conventional look removed much of the car’s unique character – a bit like when Fiat facelifted its quirky Multipla MPV in 2004.

The other main factor in the Strada’s downfall was that the robots didn’t built them all that well. Not long after launch, it became common knowledge that the Strada was underdeveloped, poorly built, and unreliable. Worst of all, though, was the ability of its Soviet steel to rust away in double-quick time. These problems were so severe they led to Fiat’s withdrawal from the U.S market in 1982.

It was not all doom and gloom for the Strada – the Abarth-badged 130TC was launched in 1983, with its 2-litre twin-cam motor fed by twin carbs. As the name suggests it was good for 130bhp, which made it the best performing car in its class at the time. The 60mph sprint was achievable in 7.7 seconds, and you also got such niceties as Recaro seats. The 105TC also continued, offering a slighter tamer option.

These weren’t enough to keep the Strada afloat though. The smaller Fiat Uno that arrived in 1983 was a huge success and served to sweep up most of the Strada’s UK sales. The car was facelifted again in 1985 – losing the round door handles on the five-door models – but it would bow out in early 1988. In its place came the new Tipo model – a model that took inspiration from the smaller Uno in its design and style.

Nevertheless, the Strada/Ritmo was a commercially successful model, with close to 1.8m made. A glance at classifieds sites suggests that many survive in Italy, no doubt helped by the climate, but the Strada is now all but extinct in the UK save for the deep-pockets TC models, and they’re hardly growing on trees.

Having enjoyed our day with a rare early car, we can’t help but feel it was an opportunity missed. Here was a car that had loads of potential, but would go on to miss the mark as it grew older. Thankfully, our test car was able to transport us back much closer to 1979, when it was a powerful statement of modernism and optimism. And let’s face it, those robots had to start somewhere.