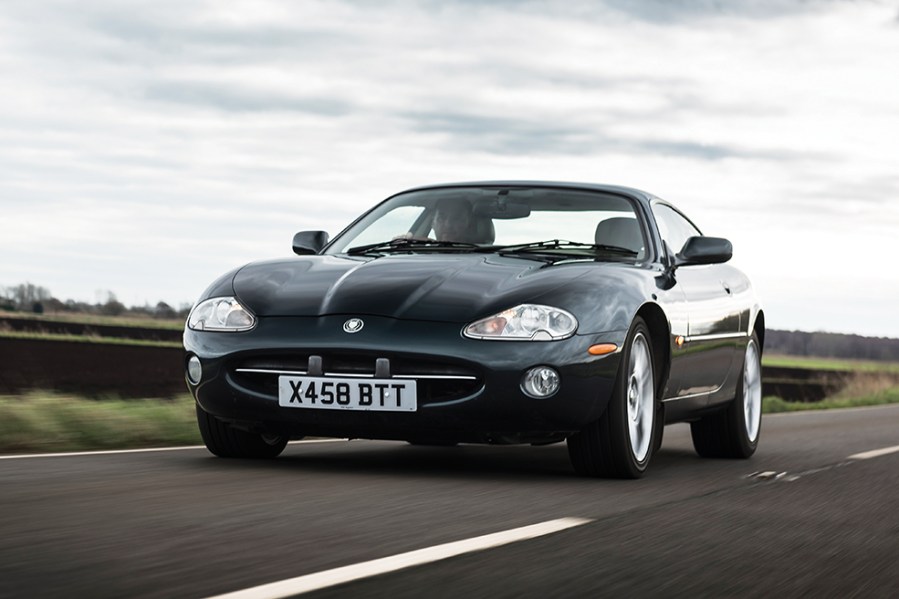 A generation more modern than the XJS and with echoes of the E-Type, the Jaguar XK8 can be a surprisingly practical proposition

A decade ago, a Jaguar XK8 would have been a rare sighting in the classic press, the car still only on the edges of the modern-classic arena and late-model examples still to be seen on franchised dealer forecourts.

Today though, it’s the later aluminium XK generation which is hovering on the modern-classic fringes and the original ‘X100’ XK8 is readily accepted as a classic. Partly because of its age of course, but partly because the passage of time has revealed its significance to the Jaguar brand as a link between the BL era and today’s world class products.

It’s also cracking value as an affordable piece of exotica, with its arresting yet classical styling and in XKR form the pace to worry anything with an M or AMG badge. Owners report the cars being really very easy to live with and parts support is excellent, meaning XK8 ownership can be as much or as little hands-on as you choose.

In that respect the XK8 has taken over from the XJS as the older car has inched steadily upwards in value to the point where the best late-model convertibles are valued well over the £25,000 mark. Under the skin though, the XK8 owes a lot to the XJS which in turn was originally derived from the first of the XJ saloons revealed back in 1968.

Launched at the 1996 Geneva show on the anniversary of the E-Type’s unveiling 35 years before, the XK8 had been a long time coming and owed its existence to the failure of an earlier XJ40-based project to create a new ‘F-Type’. Frequently scooped by the press during the 80s, the XJ41 coupe and XJ42 convertible had mushroomed into a complex turbocharged 4×4 creation and when new Jaguar owners Ford moved in the investment was directed towards improving the antiquated production facilities instead.
Meanwhile an extensive £50m modernisation of the XJ-S was approved to hold the fort while a fresh start was made on a replacement.

The facelifted car, now badged XJS, proved so well received that it gave Jaguar useful breathing space and also provided a platform on which to base it. Using the XJS floorpan and an all-new V8 engine dubbed AJ-V8, the XK8 was styled by Jaguar’s in-house design team headed by Geoff Lawson which beat off competition from all over the Ford empire and was a neat piece of work. Avoiding too many self-consciously retro touches, it neatly evoked the E-Type’s elegant curves but with a modern slant and some very modern technology. 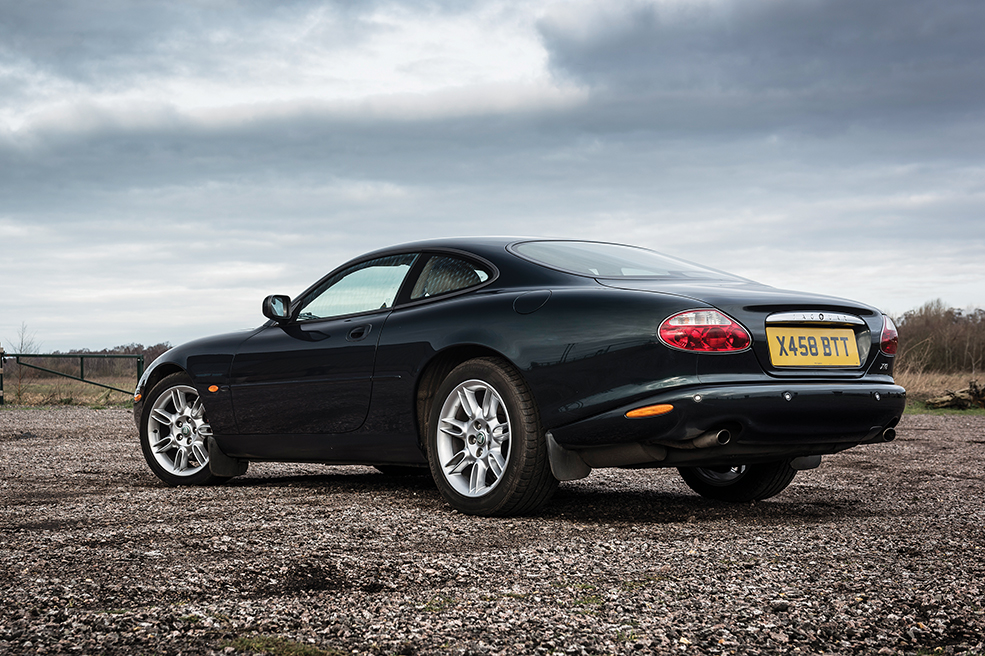 At the heart of this was the all-new XJ-V8 engine, which even in the basic 4-litre specification was good for 290bhp and in supercharged XKR form, 390bhp. Not only the first Jaguar-designed V8, it was only the fourth brand new design in the company’s history after the XK, the AJ6 and the V12. An all-alloy 32-valve twin-cam unit, it offered a class-leading specific output of 72.5bhp per litre which beat even BMW and was designed to be as compact and as light as possible, weighing in at just 200kg.

By the time the car went on sale in October 1996, a waiting lost had already built up and the XK8 lured more than a few buyers out of high-end German brands with its distinctive style, signature ride quality and – perhaps unusually for Jaguar – a very easy ownership experience. By this point, Ford’s influence in production and quality had begun to make a real difference and time has proved that a well maintained XK8 can be a surprisingly affordable car to run.

The cars were facelifted in 2000 for the 2001 model year, receiving new ‘jewel’ style tail lights with chrome surrounds, restyled rear bumper and faired-in front fog lamps, together with a chrome plinth with external release for the boot handle, and 18-inch wheels. The supercharged XKR also received larger tailpipe finishers, while inside the seats were restyled and given electric adjustment, seat-mounted side airbags were added and the advanced ‘ARTS’ airbag deployment system was added to avoid firing the airbags unnecessarily.

The supercharged engine was also upgraded with a new engine management system reducing CO emissions by 12 per cent and incorporating an engine oil temperature sensor, plus a drive-by-wire electronic throttle and exhaust gas recirculation. A 320-watt Alpine sound system was also on the options list, while the standard-fit immobiliser gained a rolling code transponder for improved security. The six-disc CD changer was now standard on all models and the standard wheel was now an 8×17 ‘Lamina’ style.

The XK received a further facelift in 2002 for the 2003 model year when the changes were more extensive and the model was referred to as the ‘new generation’ XK by Jaguar’s marketing people. The big change was stroking the AJ28 version of the AJ-V8 from its original 3996cc to 4196cc, in which form it was known as the AJ34. The new 4.2-litre engine was good for 300 bhp with 310 lbf.ft torque, or 400 bhp and 408 lbf.ft torque in supercharged form. It was paired with a new ZF six-speed 6HP26 transmission paired with an electronic control system which ‘learned’ the driver’s style and continually adjusted the shift pattern to suit.

Like previous Jaguars the shift used the firm’s traditional ‘J gate’ selector and the new gearbox was reckoned to be lighter and more compact than the previous five-speed box. The final drive ratio was also changed to accommodate the new transmission, while the Brembo brakes from the ‘R’ options range became standard on the XKR. 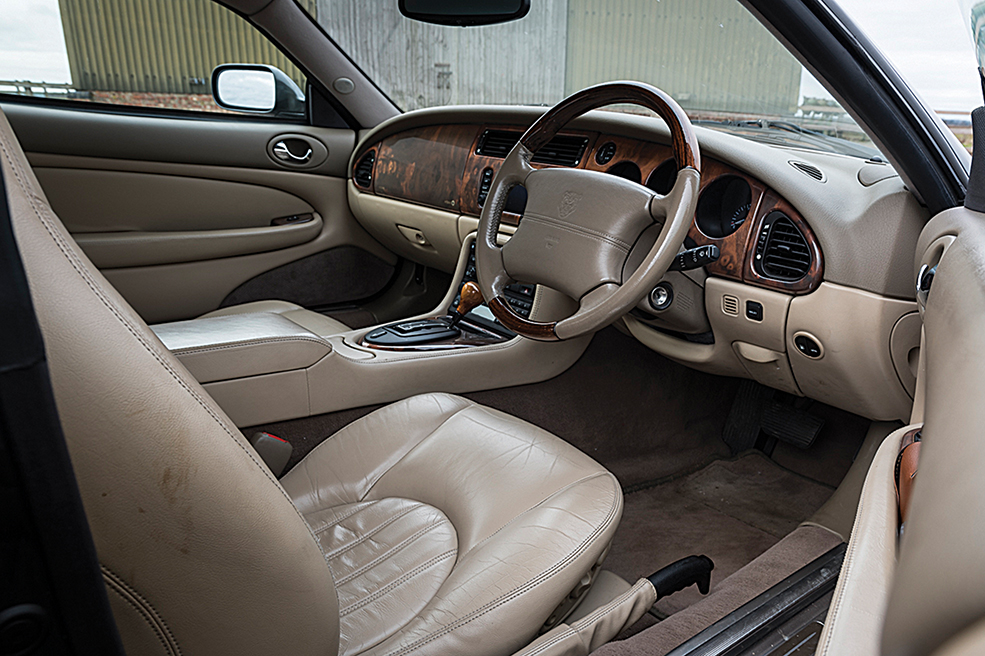 External changes involved new badging and the addition of new Xenon headlamps as standard on the XKR and optional on the XK8. New paint and trim colours were introduced and three new wheel styles were added. At the same time Jaguar introduced its ‘R’ options packages which included Recaro seats, Brembo brakes and interior details. Coupe models could also be ordered with an uprated ‘R’ performance suspension.

The 2003 cars also gained the full array of up-to-date traction and stability aids: Dynamic Stability Control (DSC) which takes the car’s lateral movement, steering wheel position and speed into account and applies the brakes or reduces engine torque to stabilise the car if it isn’t travelling in the intended direction. Emergency Brake Assist (EBA) was also added, which detects a panic braking manoeuvre and automatically applies the full force of the braking system.

While standard cruise control became standard across the range, Adaptive Cruise Control (ACC) was also made optional – a clever system which uses microwave technology to maintain a set distance from the car in front.

The facelifted models also gained new sculpted ‘growler’ badging on the nose and the leaping Jaguar motif on interior panels. From here the XK range remained unchanged until it was replaced in 2005 by a new XK, looking similar at first glance but under the skin an all-new design using an aluminium bodyshell. 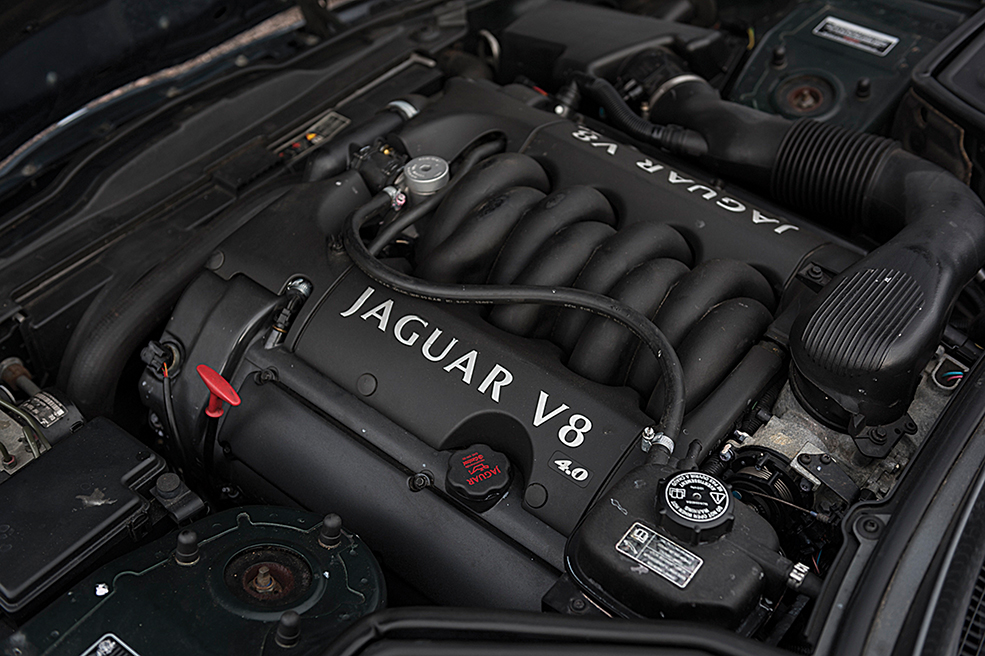 For the lowdown on what it’s like to own an XK8, who better to ask than the editor of our sister title Jaguar World, Paul Walton. Back in 2015, Paul was perfectly happy with his late-model S-Type 2.7 diesel… until photographing a group test of XK8s one day got him hankering after something a little less sensible.

Noting that prices were already starting to creep up, the idea of an XK8 took hold. “If I don’t get one soon, I’ll end up like my father, who put off buying an XK 120 in the Sixties when they were just £200 because he couldn’t afford the insurance,” he commented in print at the time. Shortly afterwards the S-Type was gone and in its place was a 2000-model 4-litre XK8 coupe, bought in a trade sale from an advertiser in Jaguar World for just under £5000 – at the time, a great price for a 75,000-mile car in a desirable spec. Which in this case extended to metallic BRG Aquamarine paint and the 18-inch Hydra wheels.

As so often with trade deals, the car needed a little tidying – the previous owner had caught a rear wing on the garage and the interior needed some attention with leather cleaning. After a weekend’s worth of elbow grease though, Paul was chuffed with his purchase, especially when the non-functioning air conditioning proved to need nothing more than gassing up, a legacy of the car having covered very few miles over the previous few years.

Shortly afterwards, a trial of the Terraclean internal engine cleaning process highlighted a timeworn plastic thermostat housing which was duly replaced just in the nick of time with the improved aluminium version which cost just £44. More frivolously Paul was delighted to reactivate the built-in phone using an old Motorola handset. 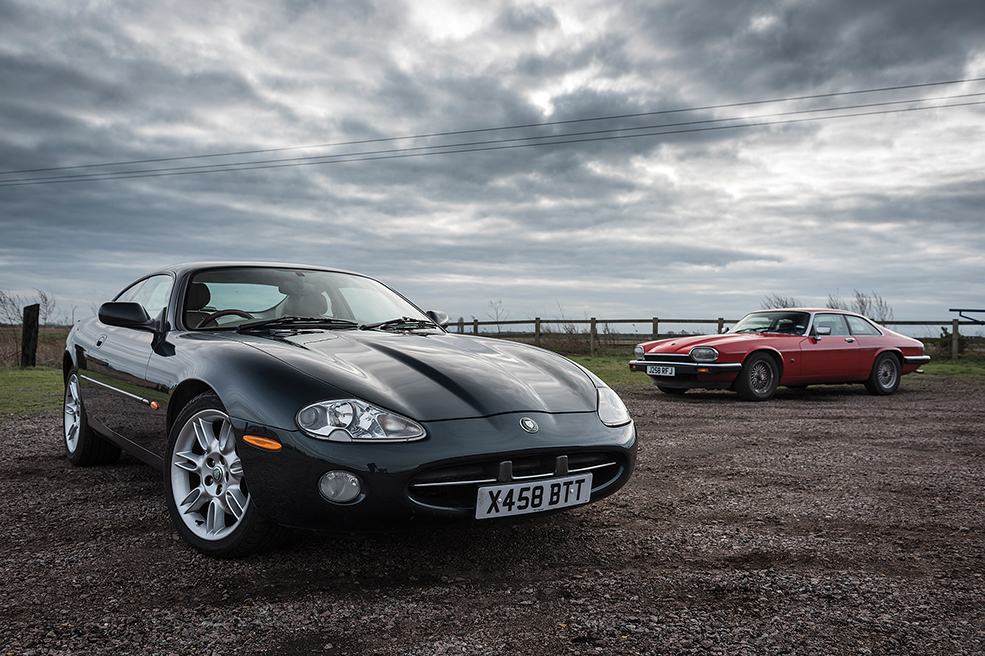 Fitting a set of new wheel centres transformed the car’s appearance and a pair of new dampers solved a slightly noisy low-speed ride. The first unscheduled stop occurred when the car went into limp-home mode following a failure of a knock sensor, which was sorted for £160 at local specialist Nene Jags. A fuel pump failure later saw the car coast to a halt on a European trip but most specialists familiar with these cars will point to that as an unusual failure. After that the XK8 proved largely trouble-free until 2019 when a series of annoying issues with engine sensors and throttle bodies spoiled the party.

Admitting that not using the car frequently was at least partly to blame, Paul points out that with 20-year old electronics you do need to budget a decent sum for maintenance. “They may be old cars, but they’re also complex cars,” he points out.

In a similar vein, Paul’s car has been through no less than three mass air flow sensors, something later traced to a faulty batch of parts, but since then has been largely trouble-free. One aspect of precautionary maintenance which is well advised for the 4-litre engine is to replace the original plastic cam chain tensioner guides with the later metal parts and Paul got lucky on this one: when the old parts were removed, the plastic guide was almost in two pieces and had it failed, the results would have been catastrophic.

In summing up his ownership experience, Paul comments that although the cars might be affordable to buy it’s important to remember that they were originally a £50,000 car and in some respects they still carry the running costs of a £50,000 car.

But he doesn’t regret his purchase at all, admitting that when it’s on song the XK8 is simply superb: “If you catch the reflection driving past a shop window, I still look and think ‘wow, is that me?’”