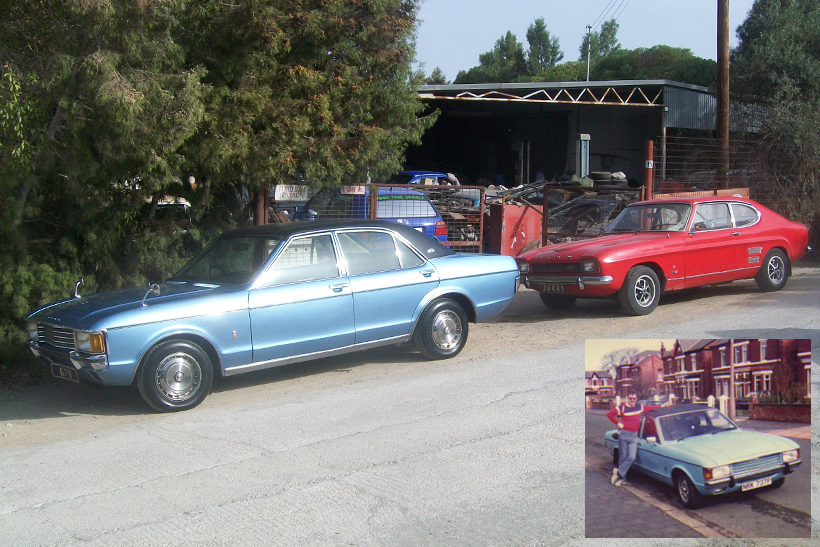 It may have taken him 25 years to realise and two ownerships, but Eddy Rafter thinks maybe the Ford Granada isn’t the car for him…

A long time ago (1985 in fact) in a town far away (two hours by road from where I live now) a slim elegant young blade (me) treated himself to a car he’d wanted since he first saw one: a first-generation Ford Granada.  The car was a 1976 GL saloon, with the 3.0 V6 engine and automatic transmission.

Oh, how I wanted to like it!  How I longed to feel that effortless power through the comfort of that black tweed seat, and to twirl that fingertip-light power steering.

Except… I’d bought a Friday afternoon engine.  It ate head gaskets, which I didn’t find out until several weeks later.  And then a few months after that.  And then a few more months down the line.  I even had the heads skimmed; yes both of them!

January 1986 arrived.  MoT was looming and the gaskets were about to go for the third time.  I went to a local tat auction with a friend and bought Lot 42, a 1974 Vauxhall Victor 1800, and scrapped the Granada.  It was a lovely-looking car right to the end, apart from crispy pillars under the vinyl roof; I’m pretty sure it had been freshly-resprayed when I got it, in its original Olympic Blue.  But it was as reliable as a politician and I never managed to find a comfy position between the seat, pedals and steering wheel.  Factor in the rubbish brakes and comedy “heater” that was totally useless in winter, and you can see why I let it go.

Friends later told me that the brake and heater issues were perfectly normal, even on the mk2 models.  They also said that it wasn’t all that unusual to have the engine issues I’d been having.  I swore I’d never have another Granada.

25 years later, and the slim young blade, by now rather more rotund and less flexible, was living in Cyprus, where my garage-owning friend Andreas invited me to accompany him on a viewing trip; he’d been offered a bunch of classics and didn’t want to get carried away.  Accordingly, one evening we drove over to Limassol to inspect these assorted offerings.

There was a Ford Escort Mexico, a Morris Minor, two Toyota Crowns and an Alfa Romeo Alfetta.  And… a first-generation Ford Granada.

This one was a really early model, a 2.5 GXL saloon, with actual wing mirrors, on stalks way down the wings rather than nestled up in the corner of the door windows.  It also had that Holy Grail in the classic-Ford community, a manual gearbox.  Andreas and I crawled all over the collection, and talked about them all the way back to Paphos, and for several days afterwards.

It would have been at least a week later when, over the usual coffee, Andreas mentioned that he’d done a deal and was I interested in the Granada?

Moving up to the Granada from my Capri seemed logical, a move that many thrusting executive types might have made in the early 70s.  I could see the car being easy enough to move on too, should the time come.  1972, so very early production; Essex V6, a highly-prized engine; and that crucial gearbox that everyone wanted, apparently.  Resprayed in its original Miami Blue, it did look a treat.  I remembered that the heater wasn’t that good, but I was in Cyprus, how much could that matter?

So I bought it, and spent the winter recommissioning it.  The car had been laid up for some time, so various bits and bobs needed attention.  For those first few weeks I fought with the clutch and gearbox, putting their recalcitrance down to lack of use.  I also found myself continually adjusting the seat, trying to get a position that fitted me.  My legs, back and big feet hadn’t changed much in 25 years, but I was carrying a bit more weight than I used to!

A summer passed, then a winter, and another summer, and all the while I’d been fighting against the clutch and gearbox.  I used to be a truck driver, and I’ve always had old cars, so you can imagine: I’ve driven some horrors in my time.  Slowly I came to realize that I was now the owner of the heaviest clutch I’ve ever handled, which was attached to the single most actively-hostile gearbox.  I’ve never been convinced by manual gearboxes in big cars, but this one completely turned me off the idea forever.

So I set about trying to sell it.  My last year in Cyprus was a tale of constant frustration and a silent phone, as the potential buyers stayed away en masse.  Finally I gave up and arranged for it to be shipped back to the UK with the rest of our goods, and the Metro van I had acquired along the way.  When it finally landed it attracted a lot of positive attention from local banger racers (of which there are many in this corner of the Lake District) and after a few weeks of use I left it at a local garage to be prepped for its first-ever British MoT.

Almost as soon as it arrived I had advertised it, and ended up with a sale in January 2013; 27 years after ridding myself of my previous Granada.

Unfortunately I took a huge loss too, practically giving the thing away.  It left a sour taste.  I can’t see myself ever having another Granada, not least because they’ve shot up in price since I sold my Cyprus one.  But also because they don’t fit me, and the brakes and heaters aren’t worth having.  It took me 25 years to remember those three factors.