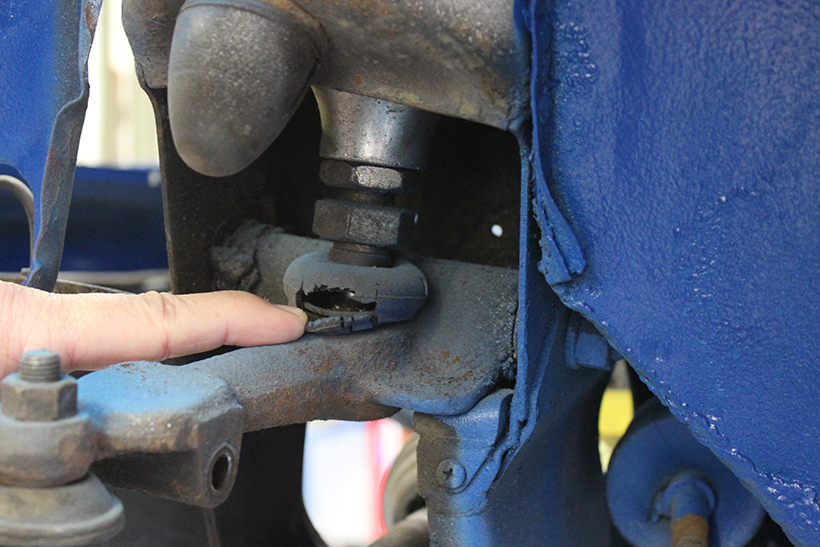 Classic car owners could unwittingly be buying sub-standard safety-critical parts for their vehicles, as issues over quality and a lack of clarity regarding part numbers increasingly blights the industry.

And, with an MoT for most classic cars over 40 years old no longer a legal requirement, the potential for failing parts to go unnoticed has taken on a new and worrying turn.

It’s a fact of life that replacement parts fail on occasion. However, our own experiences, coupled with social media, forums and owners’ accounts have highlighted a worsening situation in recent years.

So why are so many parts now failing? For some background to the problem, we contacted John Yea, Managing Director at British Motor Heritage. BMH hit the headlines recently when it used mystery shoppers to discover its Tex mirrors were being copied to a lower standard and being passed off as the originals.

But as well as passing off, John cited the thorny issue of part numbering, with lower quality items sold under the same part number as genuine ones. “In the past I’ve ordered track rod ends for my race car using the original part numbers, but we had extreme difficulty fitting them,” John reported. “Firstly the internal thread was wrong, but worse still; the actual ball joint was virtually solid. God knows how long they would’ve lasted.”

Such issues arise when an original supplier is no longer producing a part and it has to be made elsewhere, usually by a much smaller outfit without the original technical data. But while we have sympathy in these cases, it’s also being driven by market forces, leading to a plethora of cheap imported parts.

“There’s a perception that you can go online and buy the cheapest product – people are not doing any due diligence over the quality,” said John. “There’s a notional assumption that because someone is making it, then it must be right. It’s more of an issue with wearable service parts, and it also holds true in the braking arena, where I would not touch any equipment that didn’t have a proper name behind it.

“Back in the day, for every part on a car, a drawing would have every bit of material spec, the radius would be specified and whether they were critical to the strength of a component, what threads were used, what nuts were used, what metal finish was required – all of that would be absolutely specified by a manufacturer.

“But it all goes out of the window when the instruction is to just go out and get something made to a price, often in China. Don’t get me wrong, China can make good stuff, but when the instruction is to make something as cheaply as you can, guess what happens? The problem is worse than ever as more people have discovered markets like China and India through increased connectivity, and we’ve also got those markets looking for business. It’s not a criticism of them per se, it’s a criticism of the standard they’ve been given to achieve.

Things aren’t always that straightforward from a supplier point of view, however. We spoke to Simon Jackson, General Manager of Mini Spares, about the ever changing goalposts concerning items like rubber parts. “One of the biggest problems is that manufacturers are not allowed to put in the things they used to,” he points out. “As the formulas are changed, are they putting in something that’s going to cause it to degrade that they haven’t though of?

“We have to take some faith in the manufacturers doing testing as they should. However, if there is an issue, we’ll go back to them and we’ll solve it. We can’t brush it under the carpet and say it’s never a problem, but it’s getting to the heart of that problem.”

Simon was also keen to stress the transparency in Mini Spares part numbers, with anything aftermarket carrying an ‘MS’ suffix to distinguish it from genuine. “Put in the original part number for a wheel bearing on our website and it gives you a genuine Timken bearing,” Simon explained. “If you go other sites and put in that part number, you’ll find something at a quarter of the price. Without the knowledge, you’d buy the far cheaper one – why spend £50 when you could spend £14? But then you get an aftermarket part that may or may not fail.

“I think people will spend the money on a good product, but there is an underbelly of people trying to make stuff in bulk on the cheap. With some safety critical parts, we could not in good conscience put a cheaper aftermarket version in stock.

“If it’s under the genuine part number, all the steps have been taken to ensure best available. The quality of the genuine engine mounts became spurious, so we got hold of the original drawings and had the best possible mounts made to the magic formula. They are now better than genuine, so the use of an original part number is justified.”

But even with all due diligence, people still need to be vigilant. “I can’t, hand on heart say there will never be an issue, so people need to keep on top of things. We need feedback, but not just that; if something’s wrong, take it off, return it and let us get it tested,” says Simon.

Sadly, these are not practices mirrored across the board. With no annual MoT test requirement as a safety net, the onus is on the owner to ensure their car is checked – but not everyone is hands-on. And without experience, how can a customer distinguish between a good and a bad part if there’s no differentiation in the way they are sold?

“The number of people getting their hands dirty is decreasing quite significantly, therefore you’ve got a lot of people purporting to be restorers, which covers a multitude of sins,” John Yea explains.

Of course, legitimate restorers and garages are also suffering. Just like a home mechanic, a restorer can fit a part in good faith and unprepared for it to fail. They might only work on that particular model once a year, for instance, or simply have no choice when it comes to alternative parts.

As it’s often the one opportunity for someone with qualifications to inspect the car you like to spend all your time in and discover any issues, this surely all serves to make the lack of MoT test requirement for historic vehicles even more disturbing. Serious consequences – even fatalities – could follow.