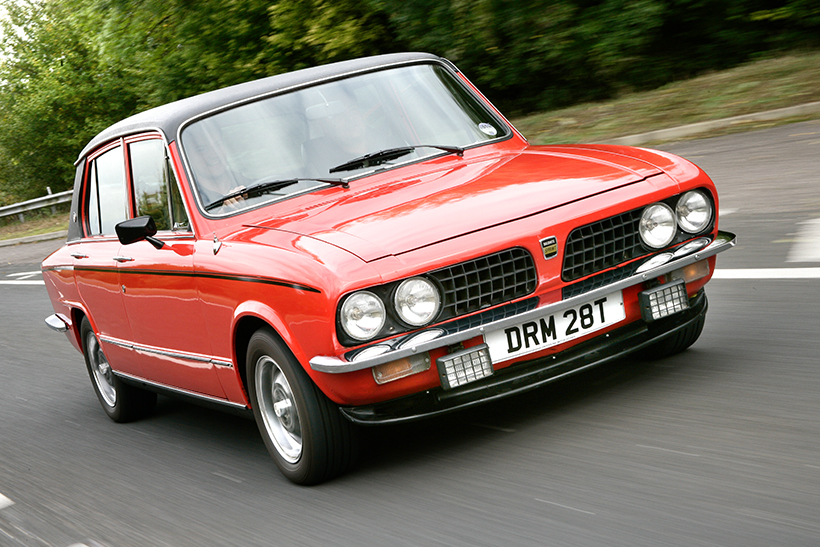 Andrew Everett questions whether and RS Escort is a better choice than a 16-valve Triumph.

The current – and still rising – prices for rear-drive Ford Escorts remains an amusement for many including me. Now don’t get me wrong, I do like a Mexico. It was a great budget sports saloon that was reliable, robust and great to drive by the standards of the day. My Dad bought one in ’73 because of just that whilst the RS2000 would have been next on the list if it weren’t for me getting ever taller. Families today with two small kids and a big seven-seater and a roof box… really? That probably says more about the cars of today than anything else because back then a Maxi was about as big as you’d ever need.

But I digress. A really nice Mexico is now £35,000, a tad more for something concours. Twin Cams and RS1600s… name your price although a very nice BDA car remained unsold recently at £70,000 or so, an insane price for a Ford Escort really. You really have to ‘get’ what the RS1600 was about to pay that as well as being wealthy enough in the first place.

The RS1600 though was a hard car to sell. A large number were pre-registered by Ford and like the Twin Cam, many stood about for months or even over a year before a buyer was found because believe it or not, there was something arguably better around.

That could well have been the Dolomite Sprint. The RS1600 was a great little car when new and shared the Mexico’s great handling. But it rode harshly, wasn’t very good on fuel, was very noisy and was also very spartan unless you started spending hundreds more on decent trim and seats. It was also not overly reliable and you had to be sure to get a well-built BDA that was set up by someone who knew what they were doing to ensure the carbs, ignition and valve clearances were just right.

Ford built the RS1600 as a homologation special and so probably didn’t make any money from them, and was even less interested in the 1975 RS1800, the BDA-engined Mk2 that was somewhat nicer to drive even if the performance wasn’t quite as sparky.

Triumph launched the Sprint in 1973 with all the best intentions. Starting off with the plushly trimmed front-wheel drive 1300 in 1965, they realised the front-drive idea was a hiding to nothing and quietly phased it out in favour of the rear-drive set up beginning with the Toledo in 1970 and the 1850 Dolomite the year after.
The Dolomite wasn’t a bad effort at all and the weeklies picked up on what a decent if slightly pricey package it was, combining lusty performance with nice handling, a fair ride and a very plush interior far better than anything Ford could muster. Build quality was reasonable if not outstanding as BL had their firm grip on everything by that point and with the Toledos being built at Speke during the ’70s anything was possible from an increasingly disinterested workforce. If we’re realistic, all ’70s British cars were pretty lousy by the standards of today and even those of the Japanese back then.
Upon its launch in 1973, the Sprint – on those alloy wheels and particularly in that eye catching Mimosa yellow – was a real eyeful.

At £1740 it wasn’t cheap but if you got a good one, it was worth the money. For its time the handling was very good with nice sharp steering, and firm suspension made it very chuckable if every bit as skittish over bad roads as the Escort.

The brakes were never brilliant but it was available with overdrive and the twin SU-fed motor was both more reliable in everyday use than the Ford (assuming again it was a good one) and could better 30 mpg in regular use.
Sadly though, the Sprint got itself a less than shining reputation for reliability as there were just too many bad ones, thrown together with an engine that demanded more care in assembly and better quality parts than BL ever afforded it.

It was also a car that would punish owners for insufficient maintenance. But for all that a good well maintained example was a terrific thing to own back then. It also made a superb racer and a YouTube video from 1979 with Gerry Marshall at the helm illustrates just how good it was.

BL of course spent nothing on development, leaving this great concept no better than it was in 1973 and leaving the field clear for Ford and BMW. Nice work BL.

Today though, a really good Dolly Sprint will leave you change from ten grand. Very tidy ones are £7500 and a good solid example needing a few bits doing? Five or six grand. Now that’s a lot more than they used to be, but there again four door Mk1 Escort 1300s used be thrown on the scrapheap once robbed of a few useful bits but now even the most prosaic 60 bhp cooking Escort without even a GT badge is the same price as a Sprint. Has the world gone mad?

Yes, of course it has but that doesn’t mean you have to. In the contest for which ’70s hero chariot to rival the Escort RS, the Avenger Tiger is in there as well but even they’re well into five figures now, dragged up by lunatic Escort prices. No, a Sprint is probably where the sensible money goes. With a really nicely built engine, some nice grippy brake pads and some decent dampers to replace the BL originals, a thoroughly rustproofed Dolomite Sprint is the Seventies hotshot to buy now… before they too are 15 or 20 grand.