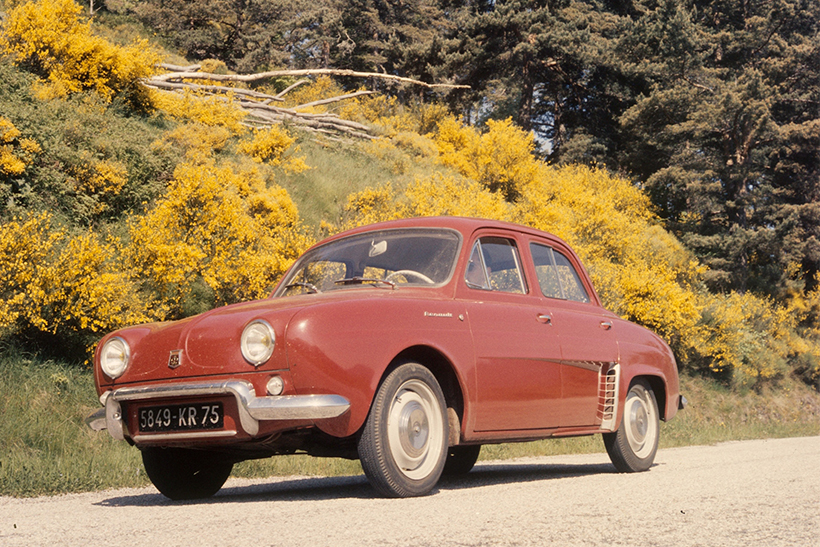 It’s a rare sight even at a classic car meet but the Renault Dauphine was once a staple of every French street scene and reasonably plentiful in Britain.

Like a kind of ’60s Megane it was the staple mid-range saloon of Renault’s line-up and eventually became the similarly rear-engined Renault 8. It was a replacement for the 4CV in which Ferdinand Porsche was famously involved in the design while in postwar imprisonment in France.

With the 845cc, three-speed engine in the rear and driving through a three-speed transaxle, the Dauphine offered useful interior space and was a stylish looking car with neat design touches like the spare wheel housed horizontally in a compartment under the front boot.

Squint and there’s a family resemblance to the Karmann-Ghia which is no mistake: Luigi Segre of Ghia was involved in the car’s styling.

In BMC style, the Dauphine provided the basis for several different Renault models including the upmarket Ondine, the convertible Fregate (badged Caravelle for the USA) and of course the Gordini version which boasted 36 bhp and a top speed of 81 mph thanks to a four-speed gearbox.

The Dauphine proved popular in Europe where its rear-engined layout wasn’t such an unusual feature to a buying public used to NSU and VW products, but over in the US its swing-axle rear suspension, modest dimensions and low power proved less popular.

It was replaced by the Renault 8 in 1962, which boasted an updated, squared-off style and an all-new engine but which retained the Dauphine’s basic layout and elements of its body structure.

The Dauphine was famous for rusting, an aspect which hit it hard in the US market and which explains why they’re such an unusual sight today in northern Europe despite Renault churning out over two million of them.

As a classic this lends them an air of exclusivity and they’re certainly an interesting alternative to an Imp or Beetle.