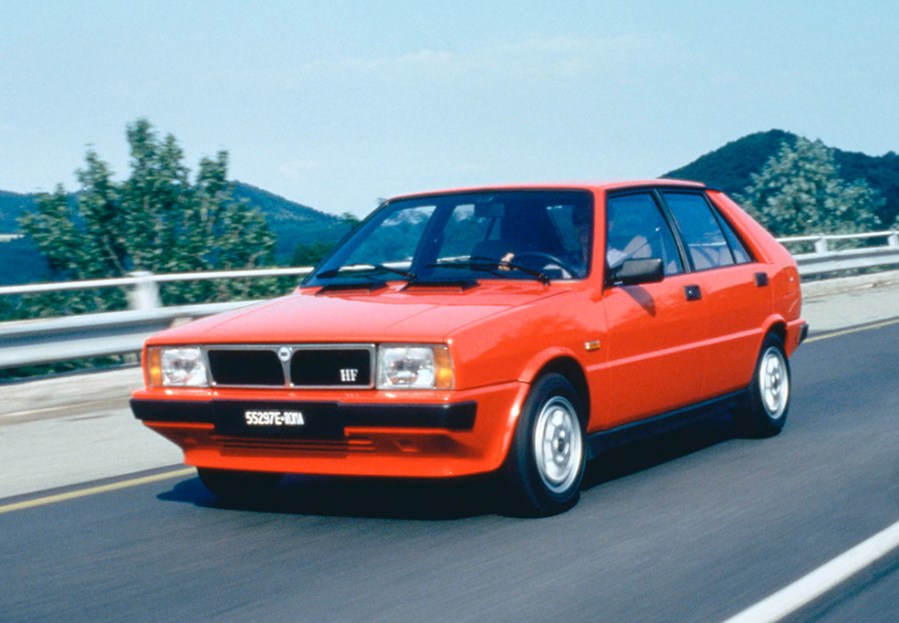 Lancia may have been absent from the UK for a while now and indeed its very existence as a brand looks to be on rocky ground lately.

It wasn’t too long ago though that the Delta Integrale was one of the most capable performance cars you could buy, holding its own in company like the BMW M3 and the Sierra Cosworth.

What many tend to forget though is that before we had the Integrale, we had the HF Turbo – essentially the front-wheel drive version of the later HF Turbo 4WD which would become the Integrale. Introduced in 1983 and running an intercooled Garrett T3 blower on the 1585cc Lancia twin cam, it was good for 130 bhp at 5600 rpm and 141 lbf.ft at 3700 rpm. In the Delta shell – based on the Strada/Ritmo platform and weighing in at just 1000 kg – this translated to 121 mph and 0-60 mph in 8.0 seconds.

This was an era when Martini sponsorship was synonymous with Lancia’s competition cars and a Martini theme was applied to early examples of the Delta HF Turbo road car.

The early HF Turbo used a single Weber 32 DAT carburettor but in 1986 the range was overhauled with a smaller Garrett T2 turbo replacing the T3 and the carburettor replaced by a Weber IAW injetion set-up. In 1987 the HF 4WD was added to the range and in 1989 this was developed to the Integrale with the engine enlarged to 1995cc and good for 200 bhp.

That early car was where it all came from though and road testers of the day loved its nimble handling and punchy delivery. Today the Delta is a rarity in any form, let alone the HF Turbo and even in southern Italy you don’t see them on the roads. If you can find one though, an HF Turbo is a brilliant way of striking out from the MkI Golf herd.