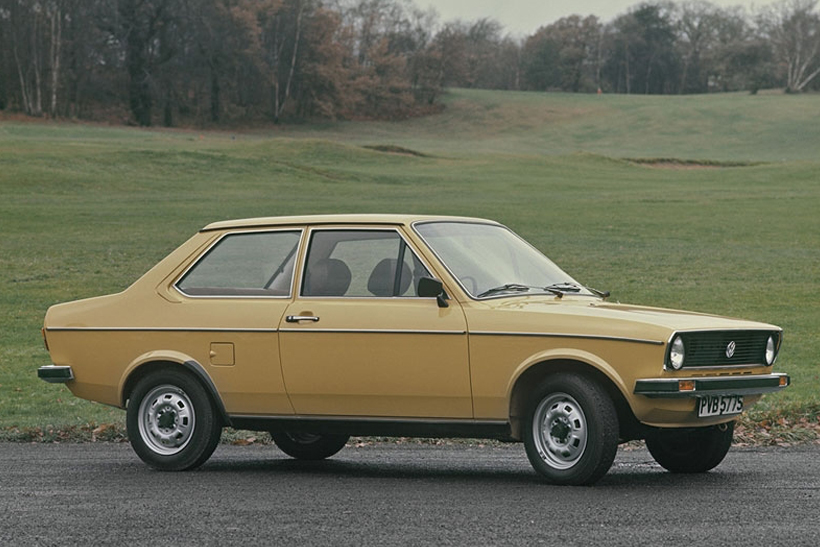 With the former NSU factory at Neckarsulm being folded into the ever-increasing VW/Audi conglomerate, the skills and engineering flair of that company were assimilated into the parent company. The NSU K70 was quickly adopted and was repackaged as a VW, but there was more in the NSU stable for the Wolfsburg company to pillage.

Development of a new supermini (or sub-compact category model as it’s known today) was deemed essential if VW/Audi was to keep pace in the early ‘Seventies. The larger Golf was already in development and to keep pace with the hatchback offerings from France (Renault 4 and 16) the Germans needed their own smaller offering.

Audi’s solution was to combine the expertise of NSU with its own in-house engineering excellence to create a compact hatchback that was a mark above the competition in terms of quality and handling. The result was the Audi 50. The 50 was powered by an overhead camshaft four-cylinder 1093cc engine with an alloy cylinder head, though crucially standing apart from the rest of the Audi stable, the 50’s engine was arranged in a transverse rather than longitudinal fashion. It was tuned for 50bhp or 60bhp depending whether you bought the LS or the GL model.

Chassis design was cutting edge with an advanced suspension set-up that offered huge amounts of grip. MacPherson struts with an anti-roll bar and a pair of lower drop links (the driveshafts formed the upper links) kept the front in check. At the rear, the torsion beam arrangement that would come to be so highly praised in the Golf was also used in the 50.

FROM 50 TO POLO
While all this was going on in its home market, the UK would have to wait until 1976 to get a version of Audi’s new micro hatch. Rather than releasing the more upmarket Audi 50 in the UK, VAG decided to only offer the striped-down budget version with a Volkswagen badge slapped on and called it the Polo. The Polo had been on sale in Germany since 1975 and offered German customers a Spartan version of the new hatch. Essentially it was identical to the Audi 50 but allowed the Polo to slot neatly into VW’s new ‘Seventies line-up.

To attract as many buyers as possible, the Polo was launched in two model choices, the N representing the firm’s most basic offering and a slightly plusher L, which gave you carpets and chrome. The carpet-less Polo N (you had rubber mats) really was a basic machine even for the time, with exposed metal in place of trim, a single-speed heater and wiper, and externally, lacked any chrome whatsoever with painted steel wheels and bumpers. For those who found this approach a little too basic, the L granted the more affluent owner full carpeting, dual-speed wipers and heater, grab handles, reversing lights, an anti-dazzle rear view mirror, chrome bumpers, and wheel trims –not to mention further subtle chrome detailing around the exterior door handles, window surrounds, and a chrome swage trim.

POLO GETS A BOOT
The Polo range was a bit of a surprise hit for VW, as were the Golf and Scirocco, and with funds pouring back into Wolfsburg again, there was scope to enhance the Polo range. The answer arrived in 1978 when the hatchback became a saloon. The Derby, as it was known, was a tidy solution to curing the Polo’s paltry 6.2cu/ft luggage space. A clever redesign from the C pillar backwards added an additional 14 inches to the Polo and nearly tripled the car’s luggage capacity. This added space did come at a price though as the Derby retailed for £2850.

WHERE ARE THEY ALL?
So as with all other basic cars that were primarily used for getting from A to B and nothing more, these cars didn’t generate a particular following when new. The rust resistance and build quality, despite being better than the competition, didn’t make these cars infallible and many would rot beyond economical repair. The cars were also often owned by people who simply needed reliable and economical transport and as such often never kept up the servicing schedule and as these rugged cars could take the abuse better than most, they would continue to work until a major failure occurred (which would often render them scrap).

An exhaustive search online has revealed that these cars are much rarer than even we had initially thought. There are few&nbsp;registered on Howmanyleft.com that can be confirmed as MkIs. The Polo Register&nbsp;also backs up these findings with only a handful of owners claiming to have seen any UK cars in the metal. This active online community also confirms that body corrosion and the lack of spares are the main contributing factors to the scarcity of these much under-rated classic hatchbacks.