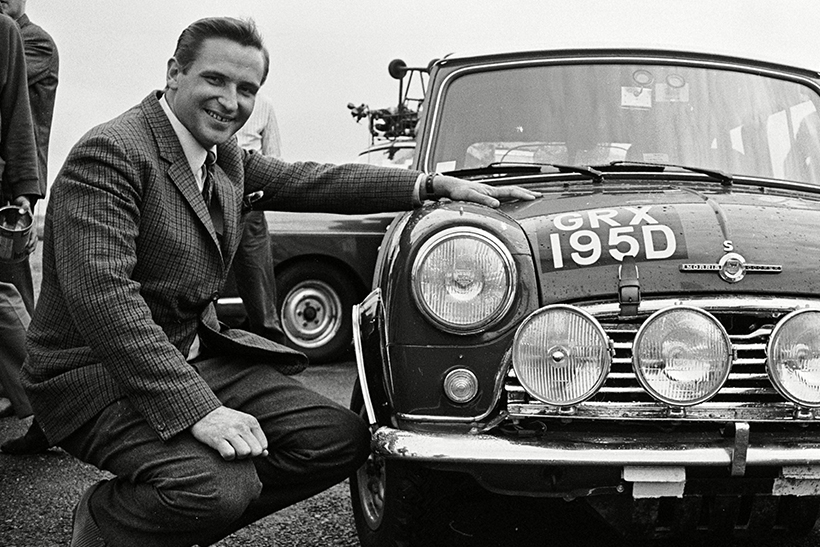 One of the original ‘Flying Finn’ rallyists, Helsinki-born Timo Mäkinen, has passed away at the age of 79. Following notable drives with the British Motor Corporation (BMC), Ford and Peugeot, Mäkinen – along with frequently airborne countrymen Rauno Aaltonen and Simo Lampinen – made Finland a one stop shop for rally drivers of the highest calibre.

With many of his achievements pre-dating the formation of the World Rally Championship (WRC) in 1973, Mäkinen made an ideal foil for the Mini Cooper, whose 100bhp he tempered with judicious use of left-foot braking. What Issigonis’ car lacked in grunt, Mäkinen made up for it in the bends; among one of the first rally drivers to use such a technique, records fell and giants were slain.

Nevertheless, the humble Mini Cooper was a far cry from his debut behind the wheel of a Triumph TR3 in 1959. With his brother Harri in the navigator’s seat, Mäkinen managed third in class during his first 1000 Lakes Rally. Only the late Erik Carlsson and Rauno Aaltonen, both driving Saab 96s, were quicker.

Having racked up the wins in Finland, 1962 saw Mäkinen start that year’s RAC Rally in a works Mini Cooper; BMC Competitions Department Manager Stuart Turner, having been introduced to Mäkinen via the local Morris dealer in Helsinki, trusted Timo on his stage record to date.

“[The Morris dealer in Helsinki] told me he was supporting a young lad and it would help him get publicity if I could find him a drive on the 1962 RAC,” Turner told Autosport. The following year, BMC rally contract signed, Mäkinen alternated between Mini Coopers and Austin-Healey 3000s. 1964’s Tulip Rally was Mäkinen’s – and 1965’s Monte Carlo Rally saw him decimate the competition with Paul Easter reading the pace notes. Mäkinen’s Mini Cooper 1275S crossed the finish line 20 minutes ahead of Eugen Bohringer’s Porsche 904, in effect a specialist racing car with rally tyres.

Mäkinen seemed unstoppable. Despite repeating the win on the Monte in 1966,the Automobile Club de Monaco quashed his victory on the grounds of lighting regulations, a decision neither Timo nor winner-by proxy – Citroen driver Pauli Toivonen – agreed with.

Not to matter – by 1967, Mäkinen was the first rally drive to achieve a hat-trick on the Finnish 1000 Lakes Rally, beating Simo Lampinen to the punch. Timo attained infamy during the event for driving with his head out of the window for most of the difficult Ouninpohja stage; when the straps holding the Mini’s bonnet failed, filling the windscreen, Mäkinen improvised.

“We did about 12 of the 25 kilometres like that,” he told reporters. “I was third fastest, even though I could hardly see where I was going – the drag was terrible too.I kept trying to put my head out of the window, but the crash helmet was too big! I threw the car sideways this way and the other to try and get a view from the side windows.”

As time was called on BMC’s Competition Department in 1968, Stuart Turner moved to Ford – and brought Mäkinen along for the ride. With a succession of Escorts, beginning with the MkI RS1600, Timo took the RAC Rally consecutively from 1973 to 1975.

Eased out of the Blue Oval by Björn Waldegård two years later, Mäkinen capped off an astonishing career by representing Peugeot in Africa. With future Peugeot and Ferrari competition boss Jean Todt in tow, Mäkinen made sure the 504 V6 went the distance.

How will Timo Mäkinen be best remembered? BMC and Ford fans will have to fight it out among themselves.

Looking back at Timo’s legacy, Mini World editor Jeff Ruggles concluded: “Alongside Paddy Hopkirk and fellow countryman Rauno Aaltonen, formed a formidable trio of BMC Works drivers that propelled the Mini into international superstardom. The Mini scene has sadly lost one of its heroes, but his legend will live on.”