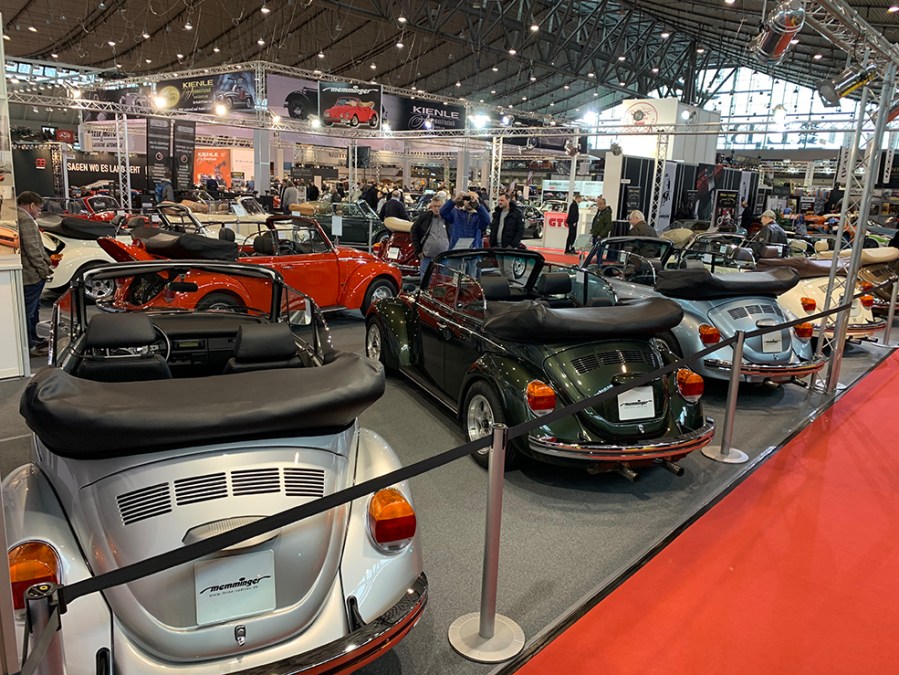 We bring you the roundup from Retro Classics 2020 as it enters its 20th year after establishing itself a firm favourite on the European calendar.

Dominated as you might expect by Mercedes and Porsche products – this is after all the home city to both marques – Retro Classics offers a very different and very European take on the classic car show. Yes, there’s a British corner, where the 50th anniversary of the Triumph Stag was being celebrated but for the most part the cars on show are German, French and Italian. But mainly German, with Porsche 911 and Mercedes R107 SL featuring prominently.

Based around displays by the bigger classic car dealers, the quality of the vehicles on show at Retro Classics is firmly at the top end and the variety is simple astounding, with some cars on display I’d only ever seen in books before. If you’re after a new take on the hobby, it’s well worth a visit.

Much like our own NEC, the Messe Stuttgart venue brings airport, railway station, hotels and exhibition centre together, making it a very easy event to visit, with return flights at under £150. The date for 2021 has already been announced as March 20-21 and you’ll find more details at www.retro-classics.de. 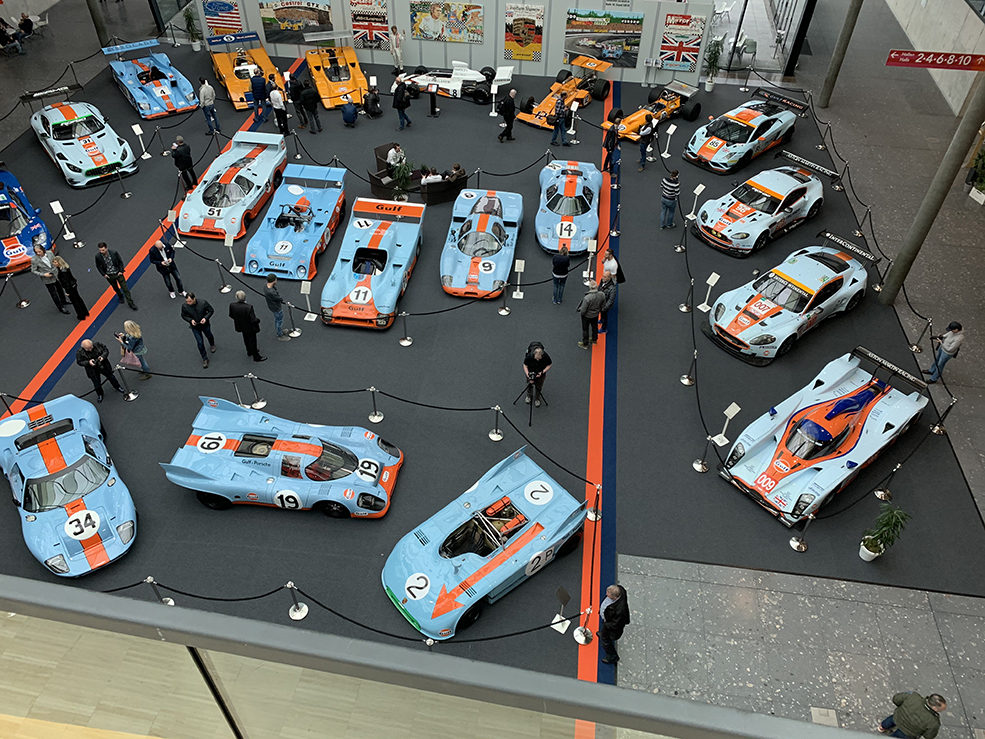 Pride of place this year went to the display of 25 cars from the ROFGO Gulf Heritage Collection of Gulf-sponsored racers. Based here in the UK, the collection is the work of enthusiast Roald Goethe who was on hand chatting enthusiastically to the public about the cars, all of which are in running condition. 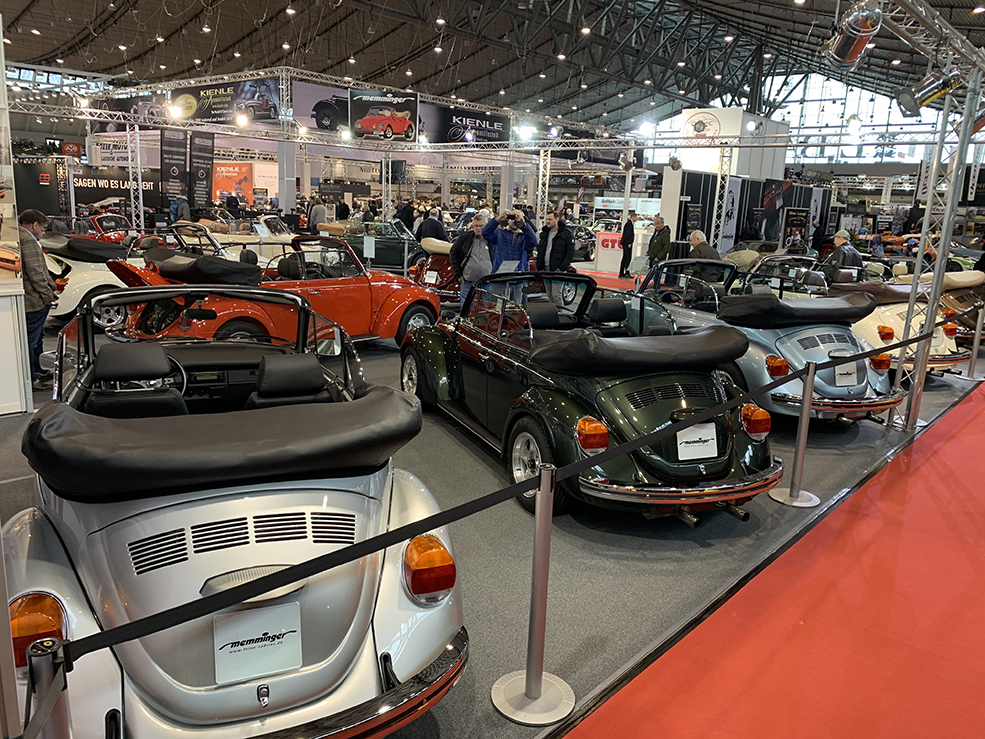 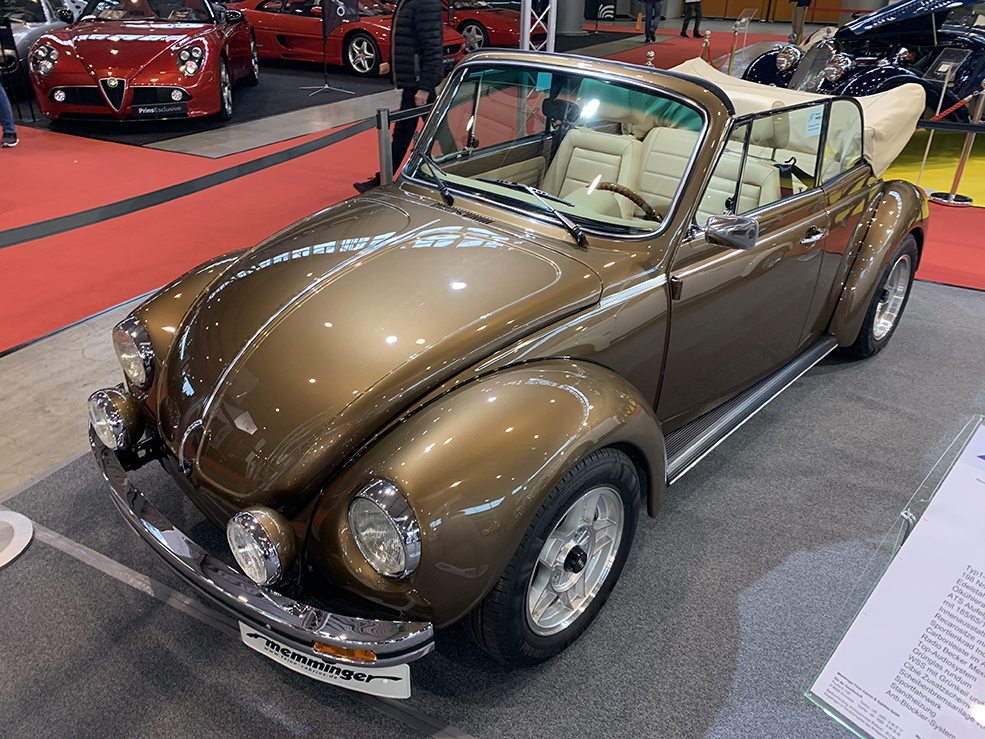 For fans of open-top Beetles, the Memminger stand was the place to be. Their Beetle Cabriolets are restored to better-than-new condition and this 1303S featured an 80bhp 1951cc engine, beige leather Recaros and the obligatory ATS alloys. More at www.feine-cabrios.de. 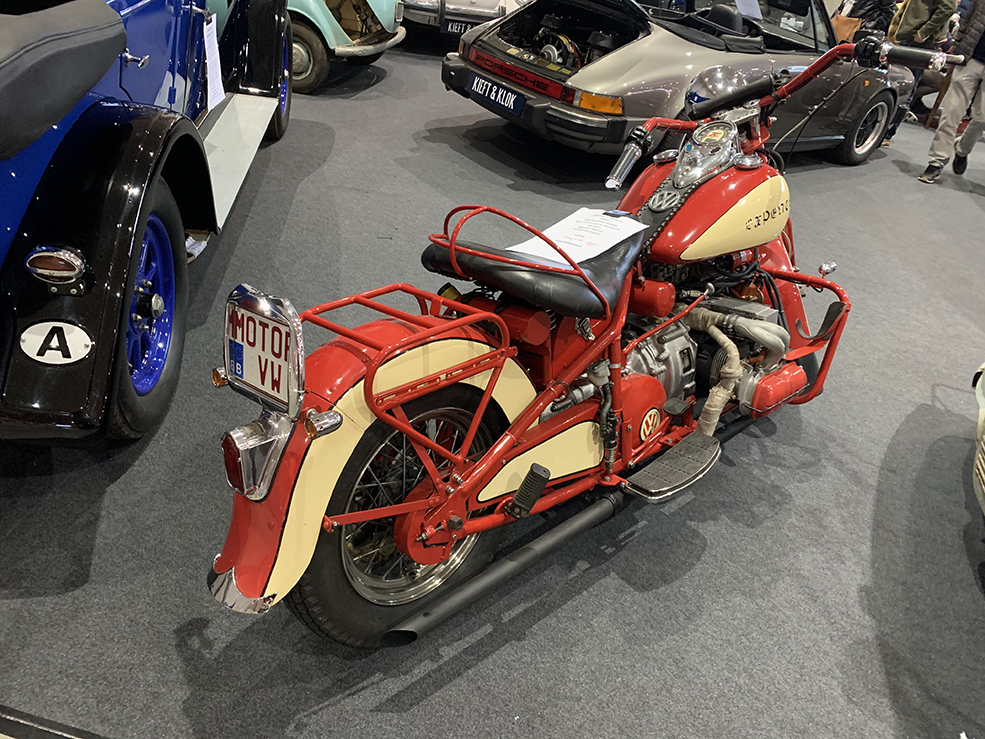 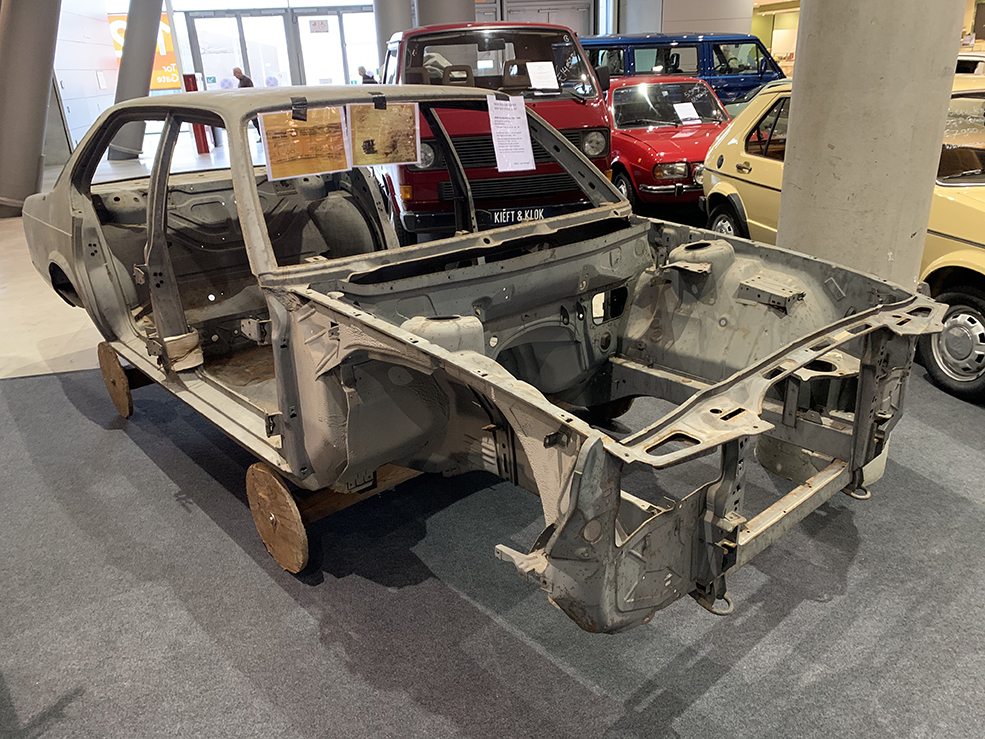 Where does this stuff come from? This is a new-old-stock bodyshell for the first-generation ‘E23’ BMW 7-Series. 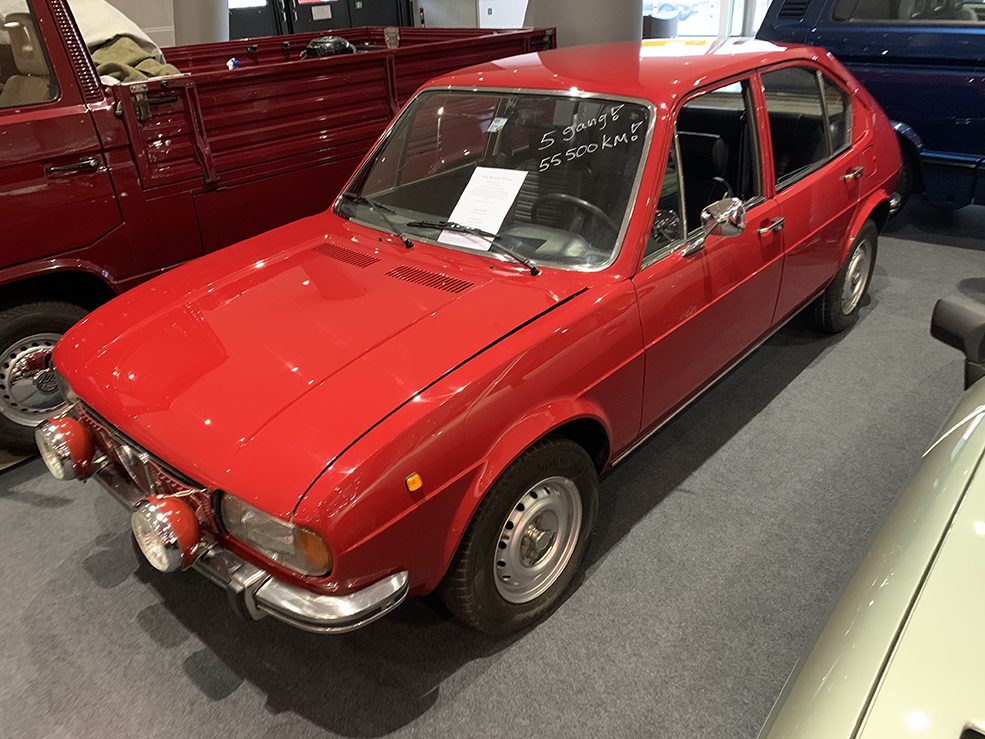 We found this 1972 Alfasud in the private cars for sale area. The asking price of €11,950 may seem steep but it was utterly mint, explained by it being a recent Italian import. 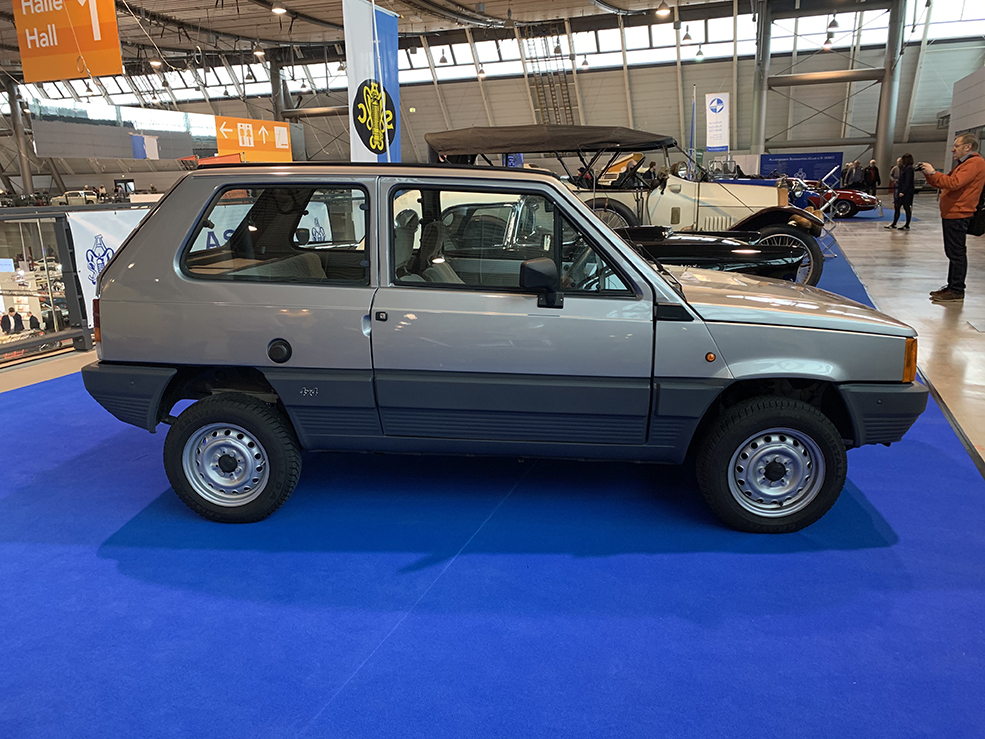 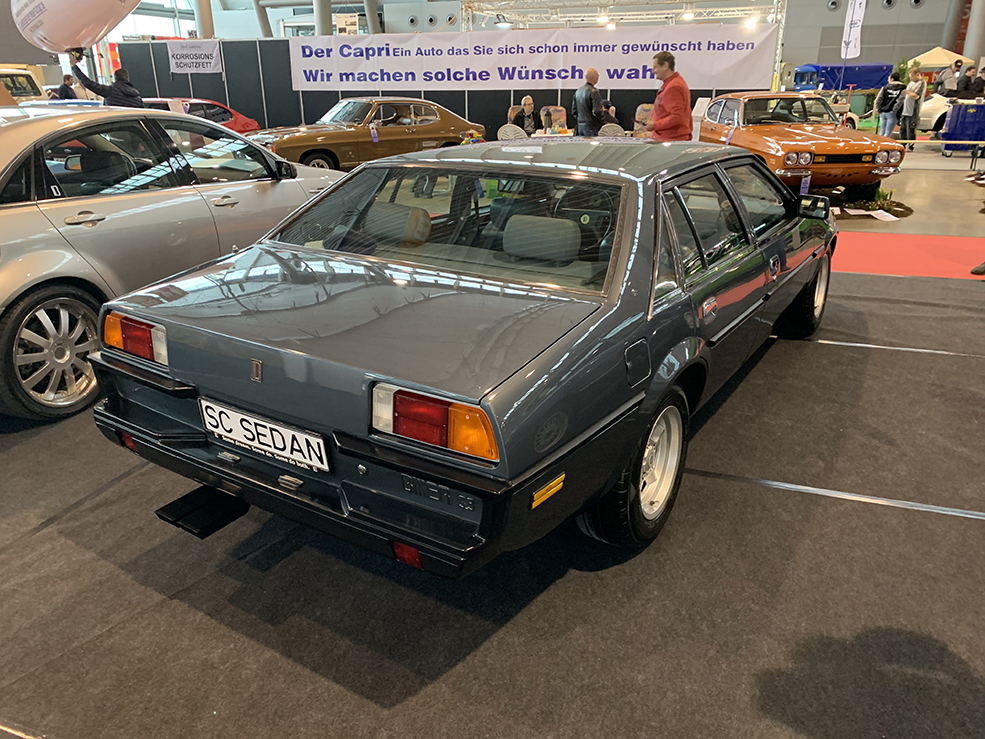 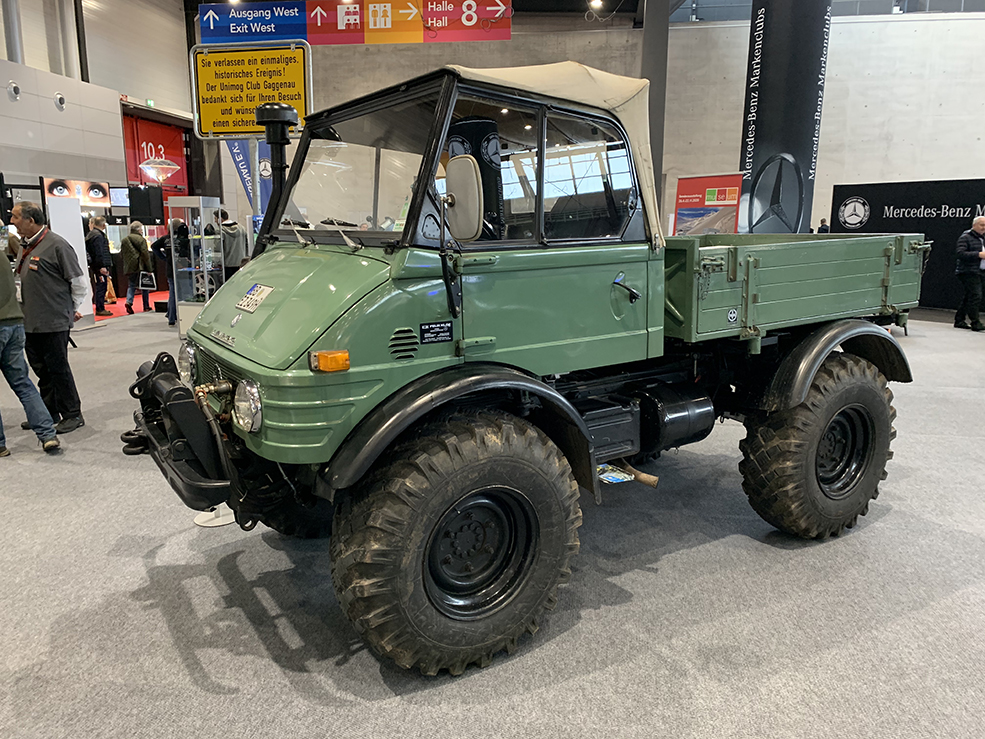 Mercedes was celebrating the 70th anniversary of Unimog production. As well as current models demonstrating on a ramp outside the halls, the firm’s stand included examples of early models. 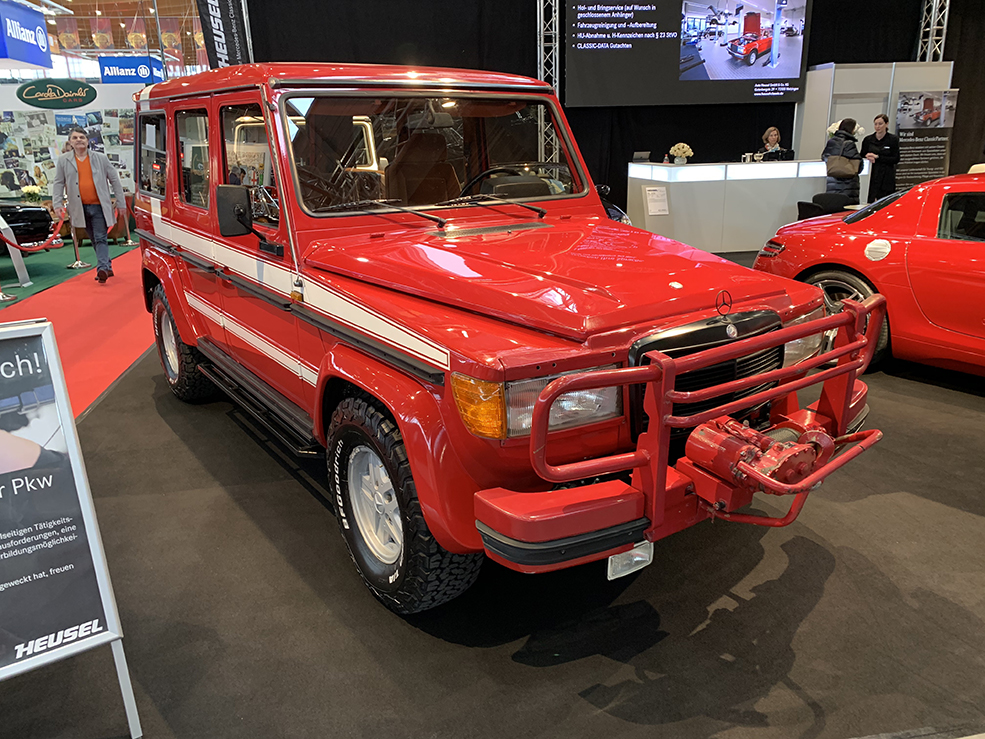 G-Wagen by Starsky & Hutch? This AMG-modified 280GE from 1980 sported the headlights and grille from a W116 S-Class. 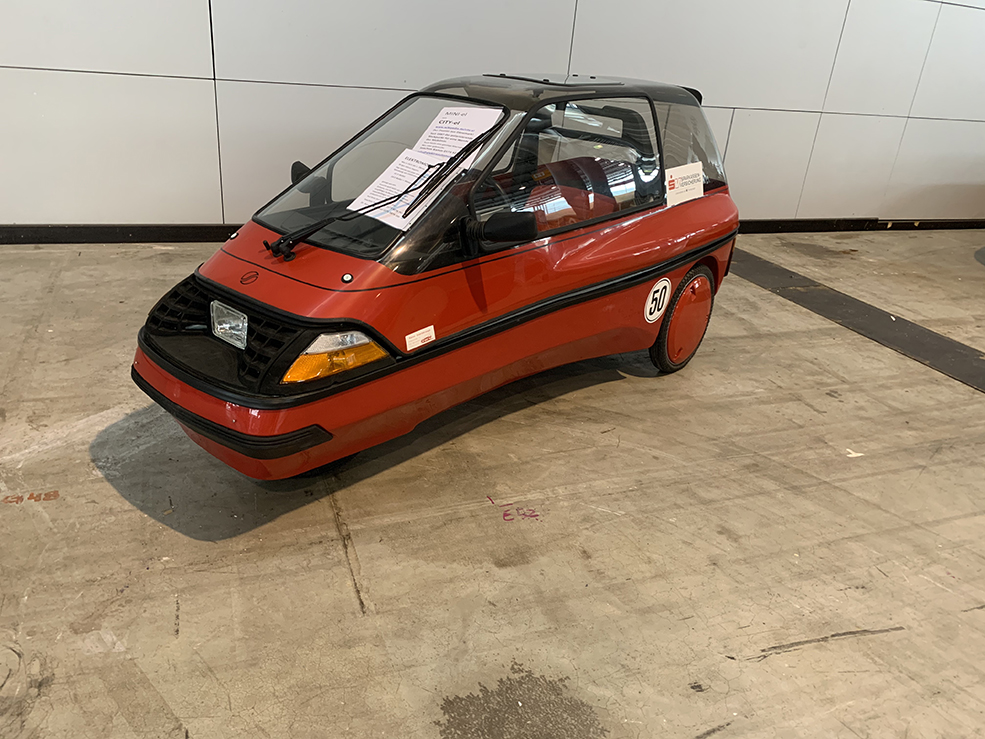 Hidden behind classic Neoplan coaches (a sight in itself) was this Mini-El, originally produced as the City-El in Denmark. The battery electric single-seater is capable of 34mph with a 60-mile range and is still in production today. 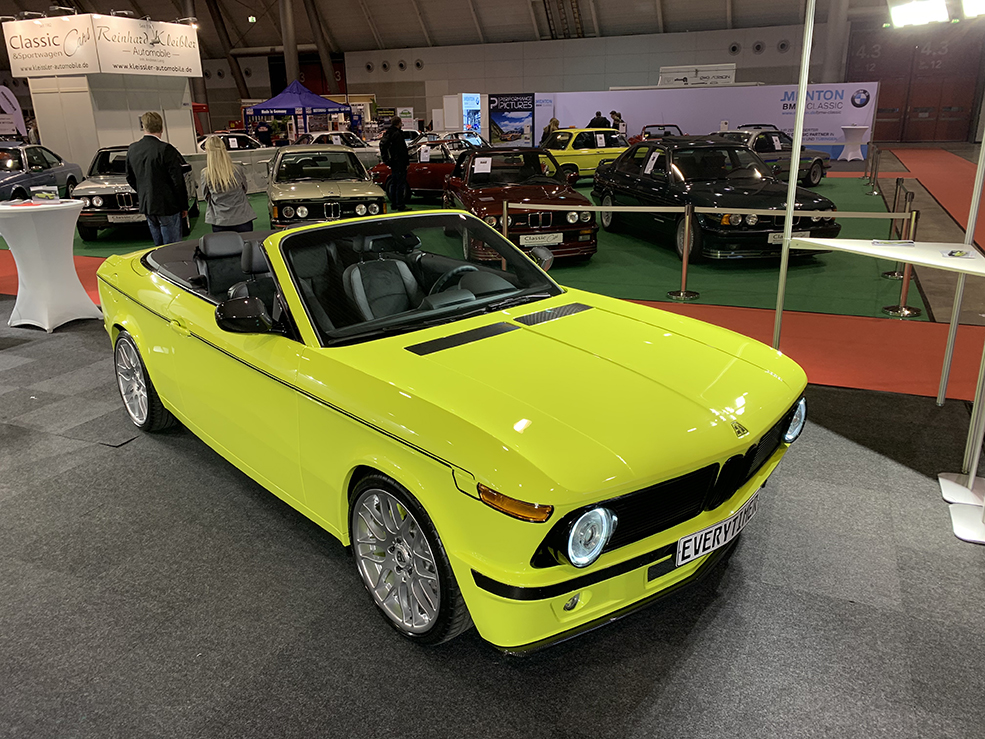 This is about as ‘Marmite’ as it gets: Everytimer.de’s carbon-bodied ‘02 Cabrio’ recalls the BMW 2002 but is in fact based on a modern-day 135i. Whatever you might think, you can’t beat the standard of the workmanship. 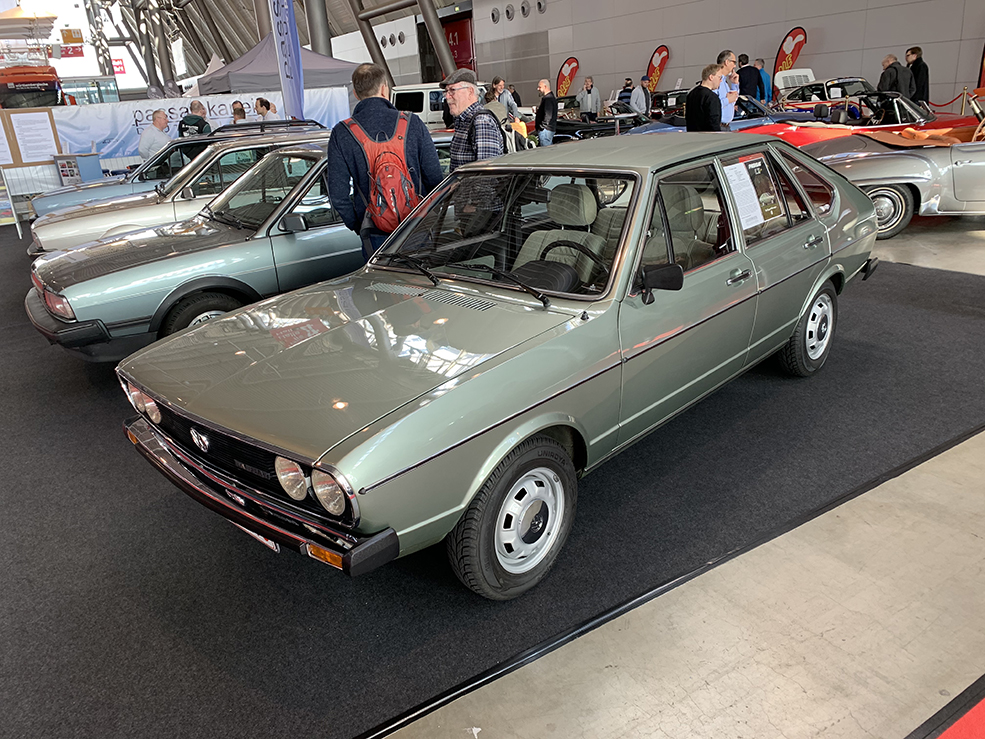 Classic Passats: something you don’t see at many UK shows. This LX dated from 1977 when it was the range-topping model. 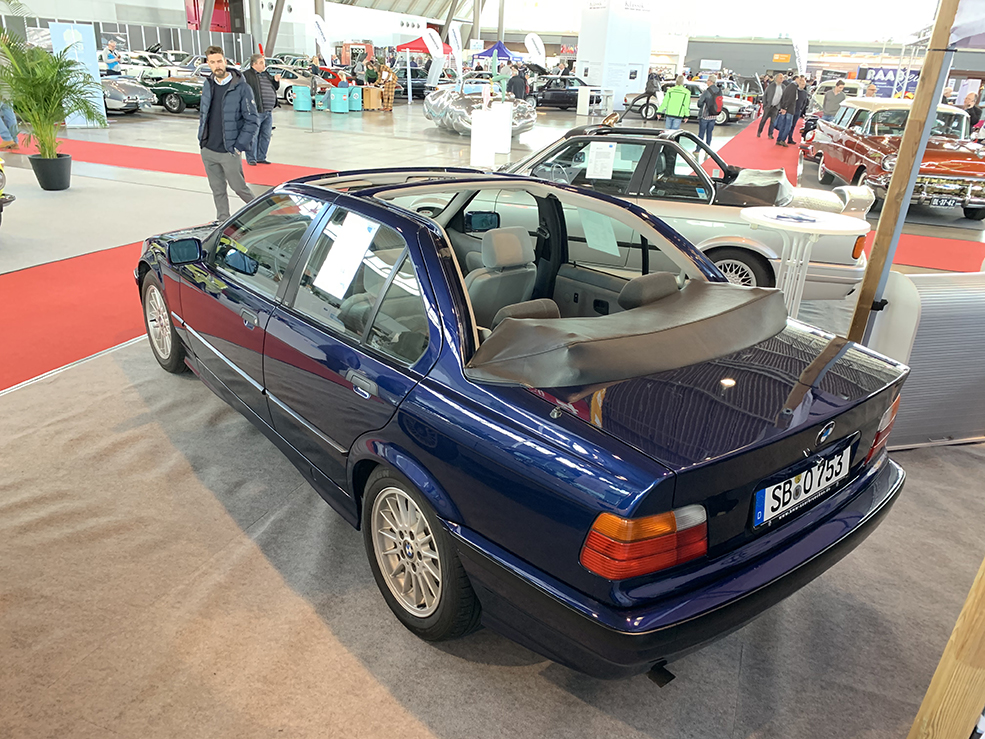 When BMW introduced its full factory convertible version of the E30 3-Series, the Baur cabriolet conversion immediately became less popular but it’s a little-known fact that Karosserie Baur continued to offer the conversion right into the era of the E36 3-Series as this example of the ‘Top Cabrio’ proves. 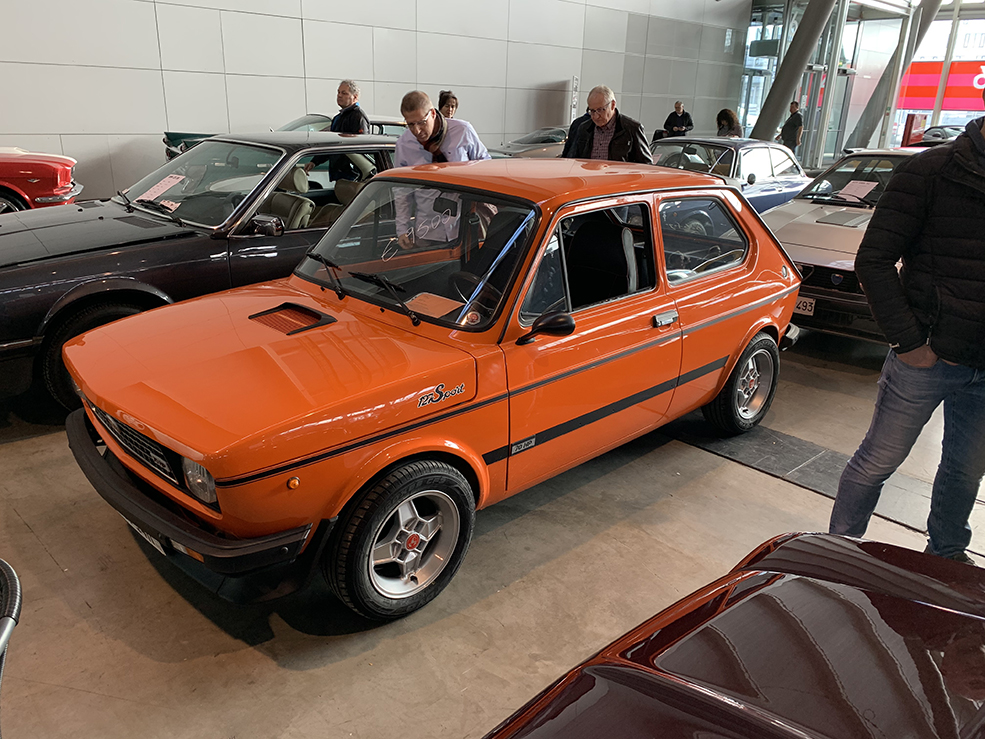 Fiat 127 Sport was another Italian import and was simply superb. The vendor wanted €9500. 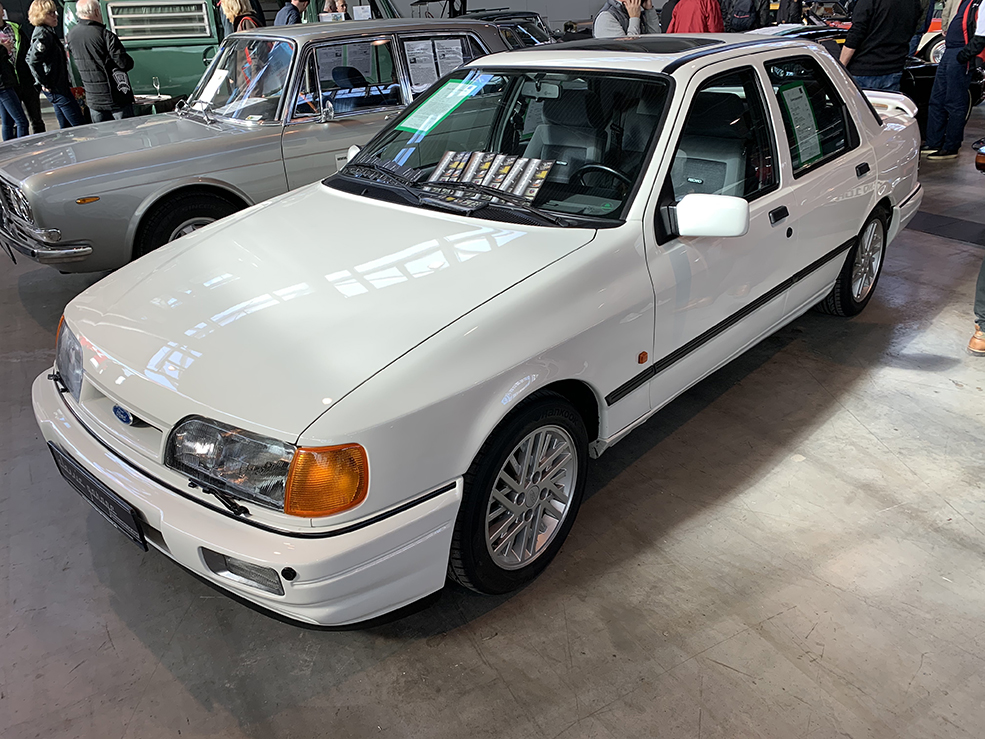 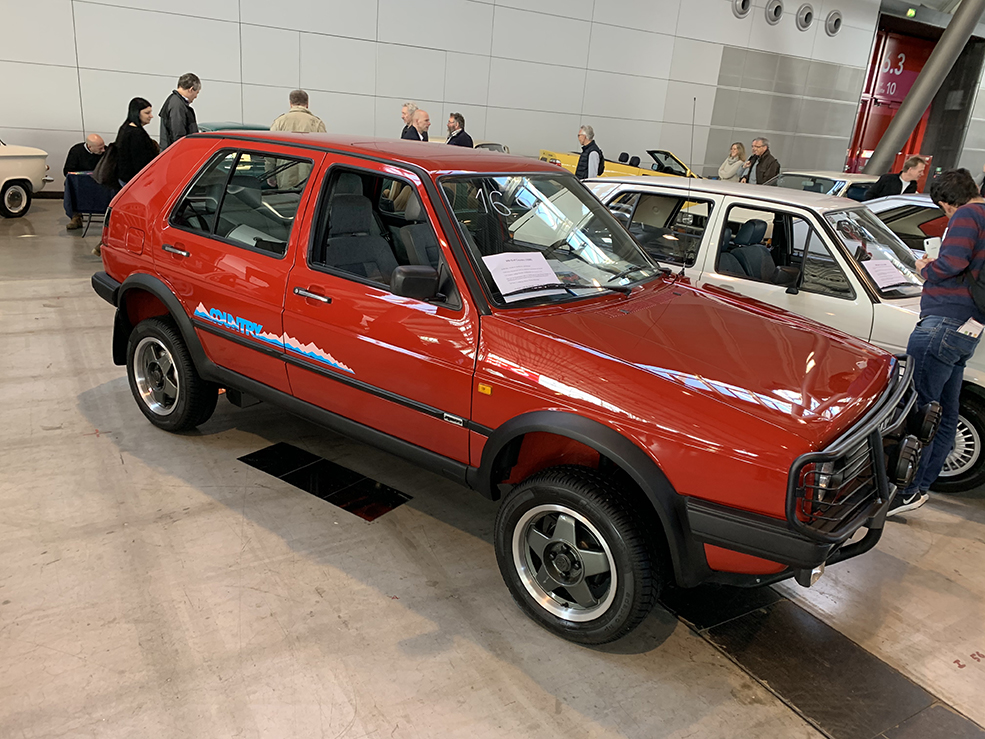 The ultimate Mk2 Golf, this is the factory-produced Golf Country, based on the Syncro 4×4 model. Yours for €16,950. 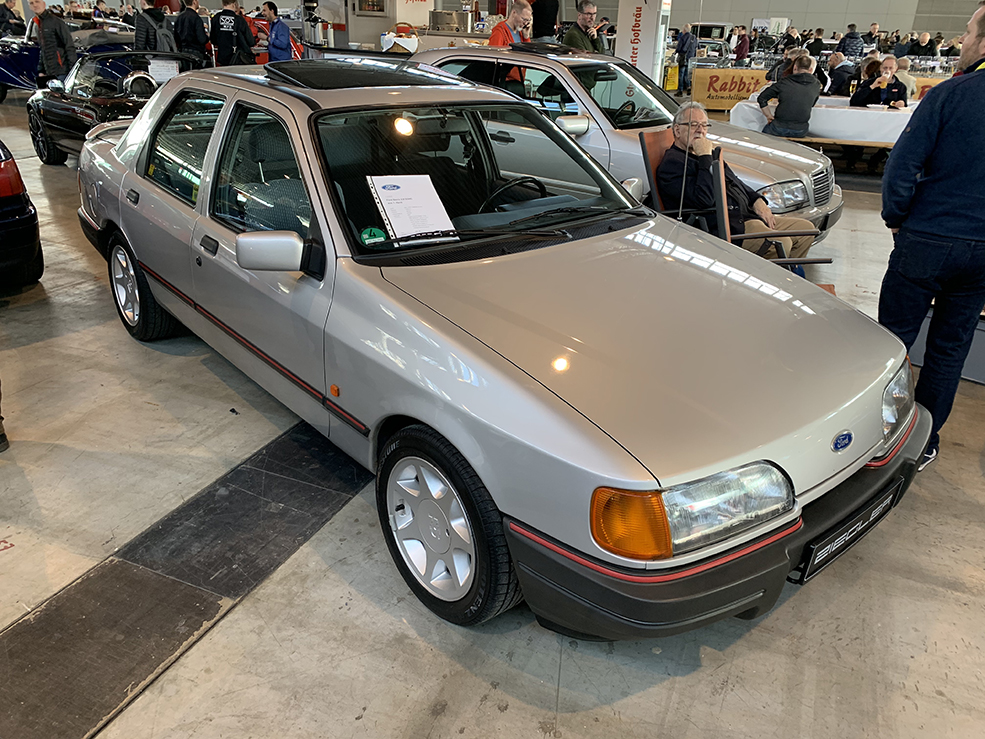 If the Sapphire Cosworth seemed a bit rich, another vendor had this example of the underrated 2.0 DOHC Sierra on offer for €3600. 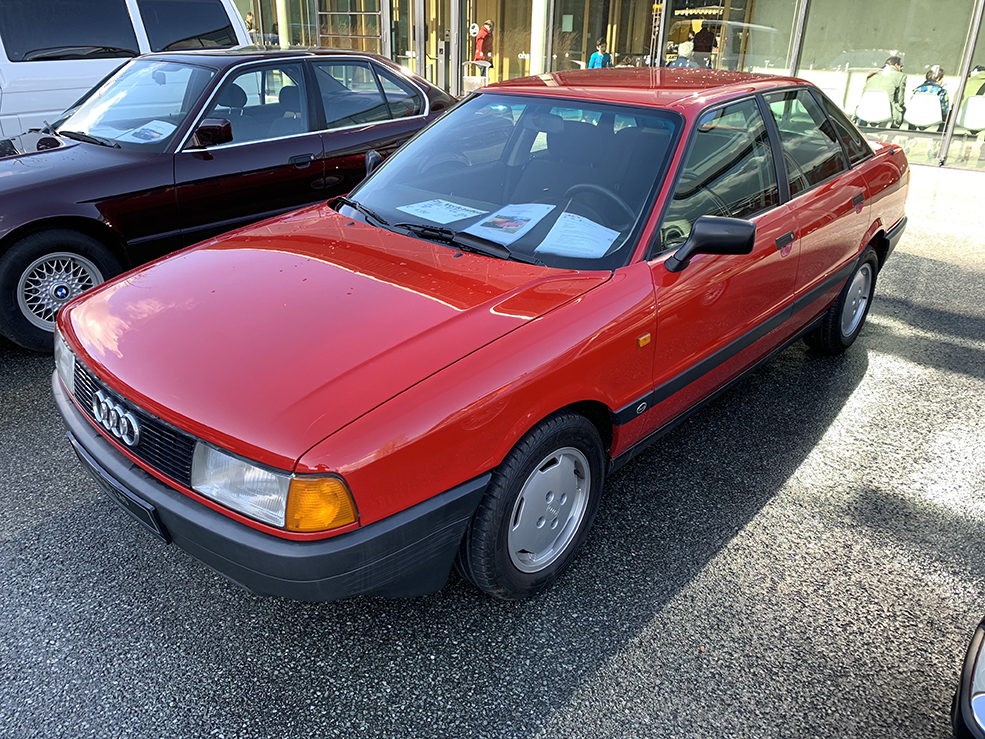 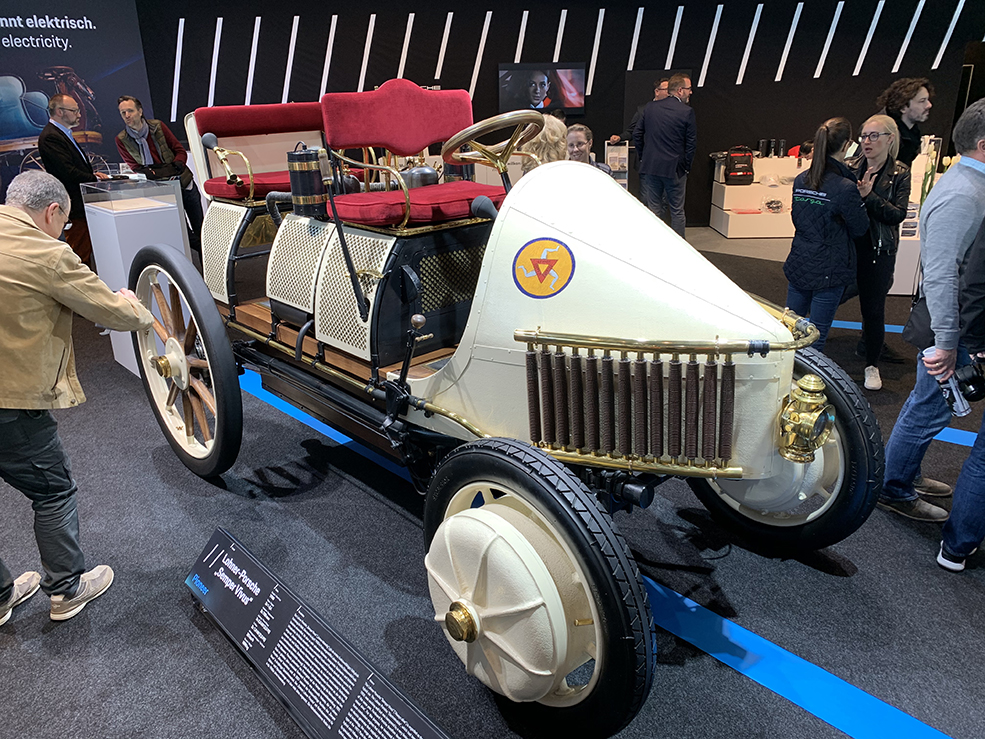 Proving that there’s nothing new in the automotive world, Porsche presented a cutaway of the Cayenne hybrid next to this 1900 Lohner-Porsche hybrid complete with electric drive via hub motors. 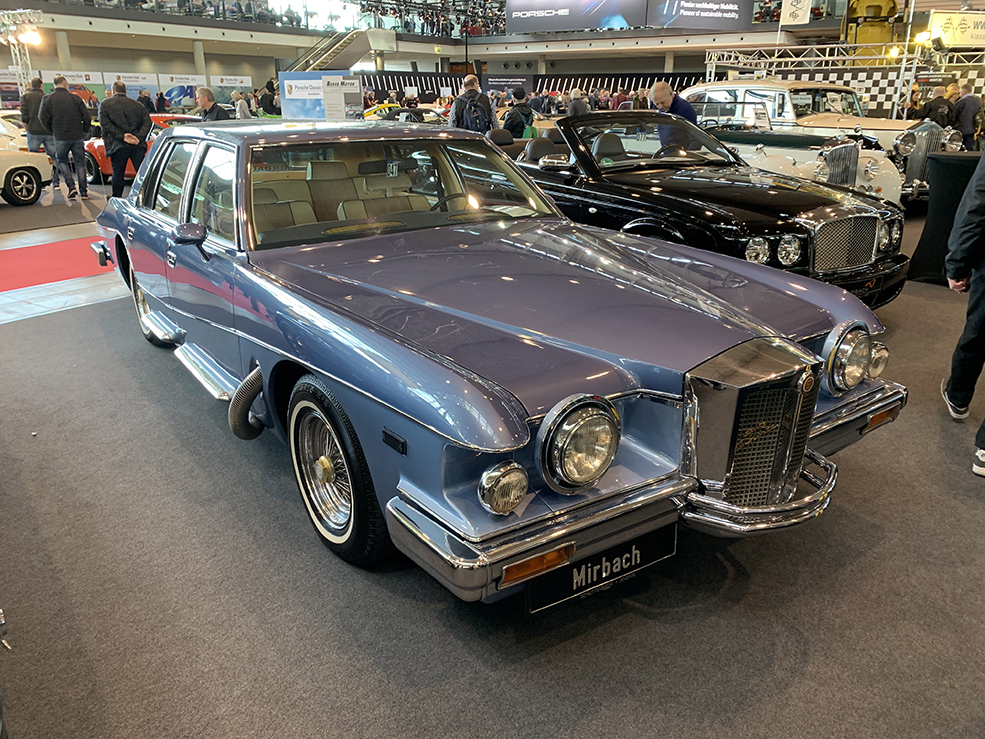 Something you’ll normally never see outside a ‘World Cars’ book, this 1982 Stutz IV-Porte was advertised at €89,000, vendor Mirbach describing it as the USA’s Rolls-Royce. Wackiest design feature (and there are many…) was the chrome protrusions on the doors, required to shield passengers from the side-exit exhausts. It’s based on the GM ‘B-Body’ platform found under contemporary Buick, Oldsmobile and Pontiac models. 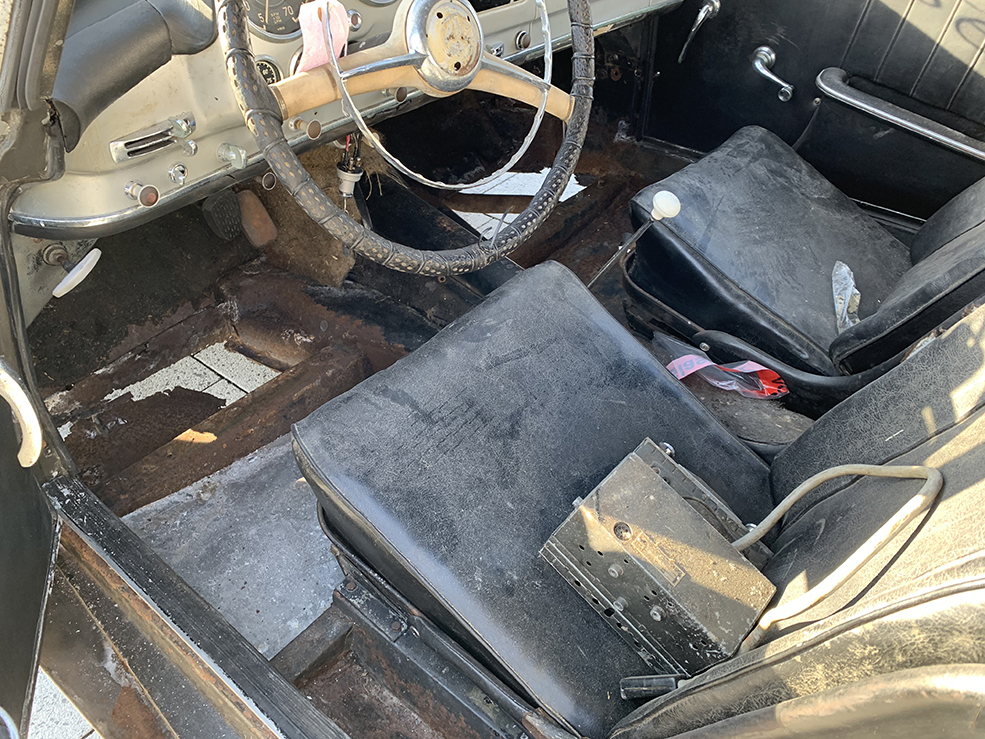 For sale outside the halls, this 1956 Mercedes 190SL had no price on the screen… nor did it have much in the way of floors.