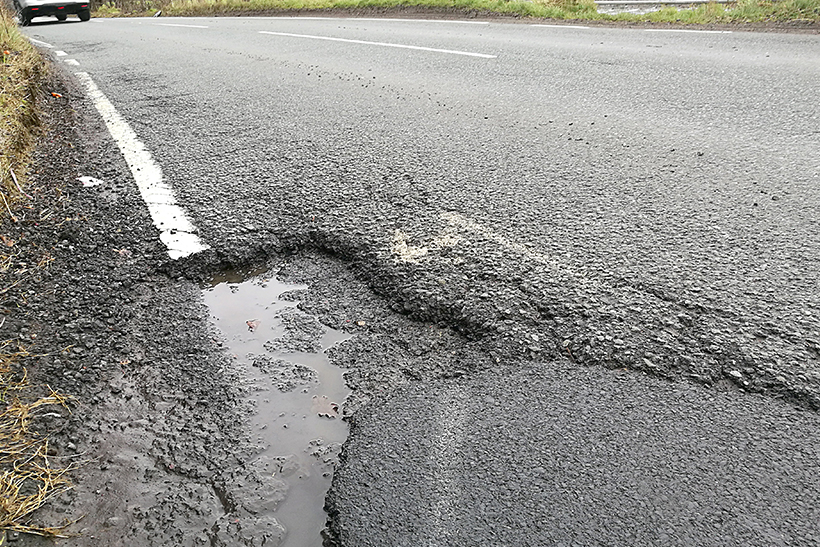 The poor state of Britain’s roads, dual carriageways and motorways are putting more classics at risk than ever before

Potholes, according the RAC, are buckling wheels, blowing shock absorbers and breaking suspension springs at an alarming rate. Having compared the data for the last quarter of 2016 and 2017, it logged 11 per cent more call outs to customers than it did in the previous year.

Rainfall, frost and snow damage, all heavier in 2017 than in 2016, played a part – as did local authority budgets. The RAC believes the condition of many roads is hanging in the balance with the potential for a further sharp rise in the number of potholes by the spring if the weather is particularly wet or cold over the next few months.

KEEP IT CLASSIC?
Steel-wheeled historic vehicles may be able to ride better over rough surfaces compared to their fatter-tyred, alloy-equipped modern equivalents, but they’re far from impervious to damage. As Vintage Tyres’ managing director Ben Field explained, “In day-to-day use, steels resist kerbing damage, and they are simpler to repair if damaged. It would be wrong to say that steels are ‘stronger’ than alloys, however.”

“As wheels have got larger, tyre profile sizes have got smaller. Tyre profiles are typically in the 40 or 50 per cent range on modern cars. In comparison, classics generally run in the 70 and 80-profile range. Taller sidewalls cushion shocks generated by potholes more effectively. But they are not immune to pothole damage and some of the monsters that lurk out on our roads will easily dismember any car tyre!”

Despite the extra funding allocated to road repairs in October last year, pothole damage continues to escalate. RAC chief engineer David Bizley concluded:
“After several years in which the surface quality of our roads appeared to be improving, the latest analysis of RAC breakdown data suggests that for the third successive quarter we have gone backwards. The higher rainfall in the last quarter compared to 2016 and the snowy and icy conditions that much of the country experienced into December are likely to be significant factors.

“We were obviously grateful that the Chancellor announced additional funds for fixing potholes in the Autumn Budget but if we get more ice and snow or further heavy rainfall than normal in the next couple of months, there is a risk of further deterioration of road surfaces – and even more potholes appearing in the areas worst affected by the weather.

“Put simply, potholes are a menace for drivers and indeed for all road users. They represent a serious road safety risk and anyone who has driven into one will know it can be a frightening experience, not to say a potentially costly one – distorted wheels, broken springs and shock absorbers can be very expensive problems to put right. And for those on two wheels it can be genuinely life-threatening.

“We want to see local authorities given the certainty of ring-fenced, long-term funding from central government sufficient to enable local authorities to bring all of the UK’s roads up to a standard that is fit for purpose. Drivers contribute around £40bn of motoring-based taxation a year and many will feel that they are having to endure roads that are substandard and therefore getting poor value for money.”