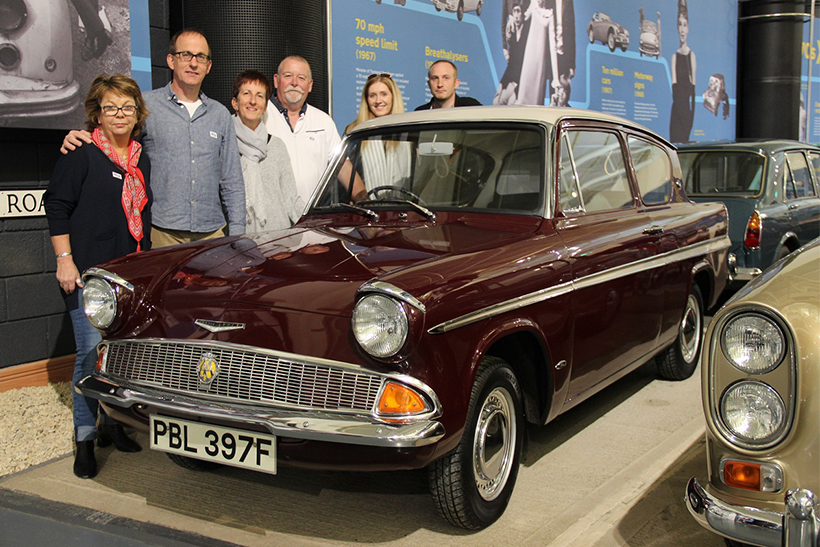 One of the final Ford Anglias to be registered has been kindly donated to the British Motor Museum by Chris and Michael Gates.

The 123E Super, which is in fantastic condition and has only 32,000 miles on the clock, has been in their family since new and was originally owned by Chris’s grandmother.

The 123E Super model joined the range in 1962 alongside the existing 105E. The Super used a larger 1198cc (1200) version of the standard Anglia engine, with a two-tone paint scheme that consisted of a contrasting side stripe and roof panel as standard. Other extras included full wheel trims, better interior trim and extra badges. The Anglia Super lasted in production with the 105E until the new Escort appeared at the end of 1967, though some examples were registered in 1968 and even 1969.

The Gates’ example is now located on the Time Road as part of the permanent collection to be enjoyed by thousands of visitors to the Museum. Curator Stephen Laing said: “We would like to thank Chris and Michael Gates for this very kind donation, which guarantees the car’s future and makes it available for everyone to enjoy. The Anglia is one of the favourite British family cars of the 1960s so I’m sure many of our visitors will connect with it. It was probably the first car I travelled in as my parents owned an Anglia when I was born!”

The British Motor Museum frequently get offered items of all shapes and sizes. However not every car offered to the Museum is accepted, especially if it’s something similar or a duplicate. The Museum has strict procedures about what it can accept to ensure the car is right for the collection and there is adequate space for it. To find out more about the British Motor Museum visit or call 01926 641188.