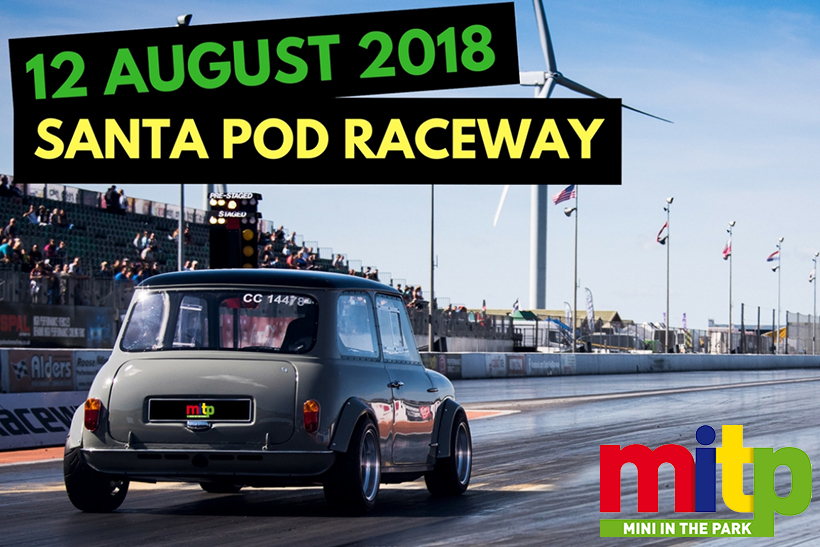 Another year of grand summer celebrations are in place to praise the nation’s favourite small car at this year’s Mini In The Park, which takes place at Santa Pod in Bedfordshire on Sunday August 12th. This year there is an extra level of excitement with Santa Pod announcing a brand new drag strip surface. On top of the historic strip action, a live action arena, epic dedicated displays and Mini competitions will be on hand to provide nonstop entertainment.

The Pride of Ownership display returns for its second successive year, this impressive display seeing 40 of the most loved, best-kept and cherished Minis take centre stage at the heart of the show. These will be judged during the day on their presentation – with only 20 Minis being invited on the Pride of Ownership Parade and so having a chance of winning a host of prizes, competition is tough. The display is open to anyone with a Mini, old or new, custom or stock; to be considered for this year’s display, fill out the online form on the official show website.

There will be dedicated displays from the three marque magazines – Mini Mag, MiniWorld and Performance Mini – with cover cars, impeccable restorations and crazy customisations on their own dedicated stands. As well as the magazine displays, expect a sea of Minis with a huge club presence throughout the show, not to mention a special Mini-only parking area reserved for non-club members and a special award for the best non-club Mini attending the event.

Clubs on the day will not only be providing some of the star cars, but also some of the unmissable entertainment. One of most memorable features of the day will be the Club Mini Push, with club representatives competing head-to-head in a battle to push a classic Mini around an obstacle course in the fastest possible time. Visitors will also have the chance to enter a competition to win a classic Mini, sponsored by Carole Nash Insurance. The yellow 1989 Mini Mayfair will have a new owner come August 12th with the winner being announced at the show.

Each year, hundreds of Mini fans choose to start their MITP experience early with a festival feel and family-friendly campsite. Mini-only strip sessions also start on Saturday and open from 5.30pm until 8pm, at which point Fuelers bar will be open for the evening entertainment from 8pm until late.

Discounted advance tickets, camping entrance and more show information are available from Mini in the Park