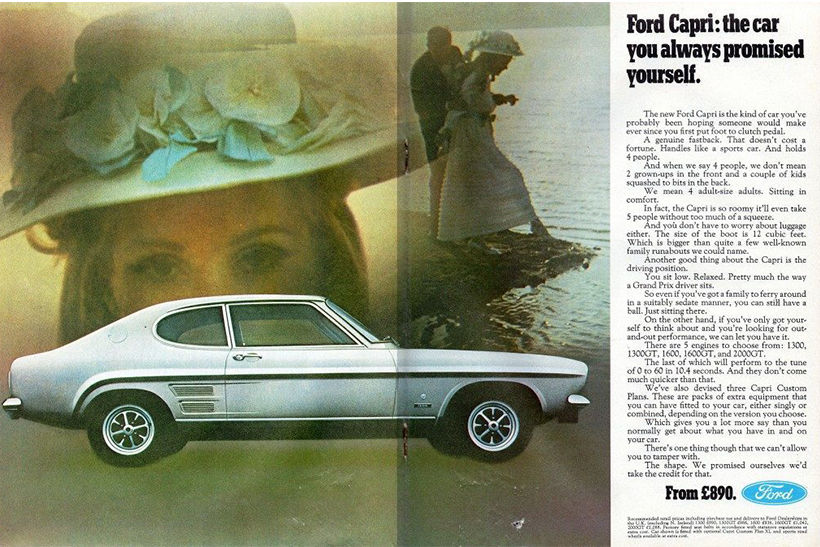 Who remembers; “The car you always promised yourself”? Yes, it was the launch slogan for the Ford Capri in 1969. Classic World’s Nigel Stennett-Cox  explores the badges and slogans used over the years by automotive giants that made their products famous.

“The quality will remain when the price is forgotten”, or so said Henry Royce, co-founder with The Honourable Charles Stuart Rolls of the Rolls-Royce Motor Car Company. This began making cars of the highest possible quality, with the classic pediment, or Greek Temple, radiator shape in 1904.

Only in the past 10-15 years, with certain markets expecting more “bling” has that shape of surround been compromised. One such car from that first year survives in full working order today, as of course does the firm, now assembling and trimming the cars in their ultra-modern factory based in Sussex (owned by BMW). After the company’s six-cylinder 40-50bhp model appeared in 1907, setting a new standard in superb engineering more or less regardless of cost, along with probably unprecedented refinement and reliability, the firm’s reputation became assured. Later, in what became the company’s heyday, Rolls-Royce took to incorporating the phrase, “The best car in the world” in some of their advertisements. This was usually the only text in the advertisement, with no mention of the Rolls-Royce name. A sketch of part of a car bearing the classic radiator shape was all that was deemed to be required. 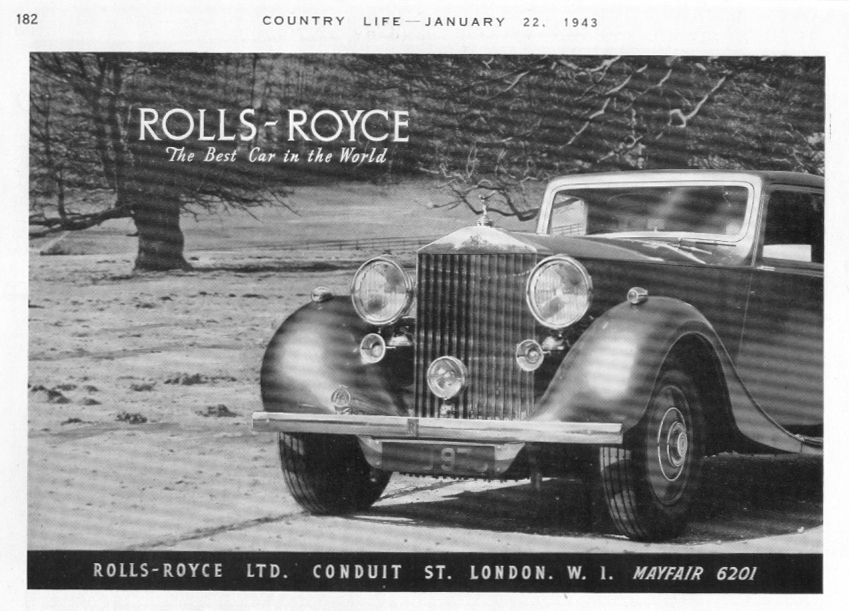 Now, the reception area at the Goodwood factory has a slogan also attributed to Henry Royce above the desk saying something like, “We take the best and make it better”. This writer finds it hard to believe that Royce, who died in 1933, would have given vent to such typical 21st century management-speak hyperbole, but times change.

Luxury car manufacturers in other countries adopted slogans pre-war, with many using them unchanged for decades. The proud American firm of Packard went for; “Ask the man who owns one”, maybe hardly politically correct today?

Cadillac went for; “Standard of the world”. More thought and achievement went into this simple slogan than many may realise. The company was amongst the drive, led by American industry around the turn of the 19th and 20th centuries, to make mass-produced parts such as for cars and guns that were so accurately produced no “fettling” or hand-fitting was necessary. A practice we take for granted today, but revolutionary some 110 years ago. To drive the point home, Cadillac won the then highly-prestigious “Dewar Trophy” awarded by the Royal Automobile Club in 1907.

For this, three Cadillacs were completely dismantled in a large arena and the parts mixed up. The parts assortment was then assembled into three perfectly functioning cars. It may be more than coincidence that there were two co-founders of Cadillac, Henry Leland and Henry Ford, with the latter going on to adopt the same practice. This was fully functioning by the time of the introduction of the Ford Model T in 1908. The word “standard” did not then mean the opposite to “de luxe”, but built up to a standard. If a slight digression may be permitted, this gradual semantic shift was said by some commentators to have been behind the dropping of the Standard marque by Standard-Triumph in 1963.

Back home, we had the small but successful Yorkshire-based firm of Jowett advertising “The little engine with the big pull”. For all of the time that the company made cars (from 1909 to 1954), they only fitted horizontally-opposed engines of their own design and manufacture, with most of them being under 1000cc and of only two cylinders. Still, these plucky little cars were excellent hill climbers. After the Second World War, they ambitiously introduced the “Javelin” saloon and corresponding “Jupiter” sports car, complete with flat-four engines, but succumbed in 1954. Their slogan for the Javelin in the firm’s advertisements was, “Take a good look as it passes you”, alongside a three-quarter rear view of the car’s fastback rear-end. 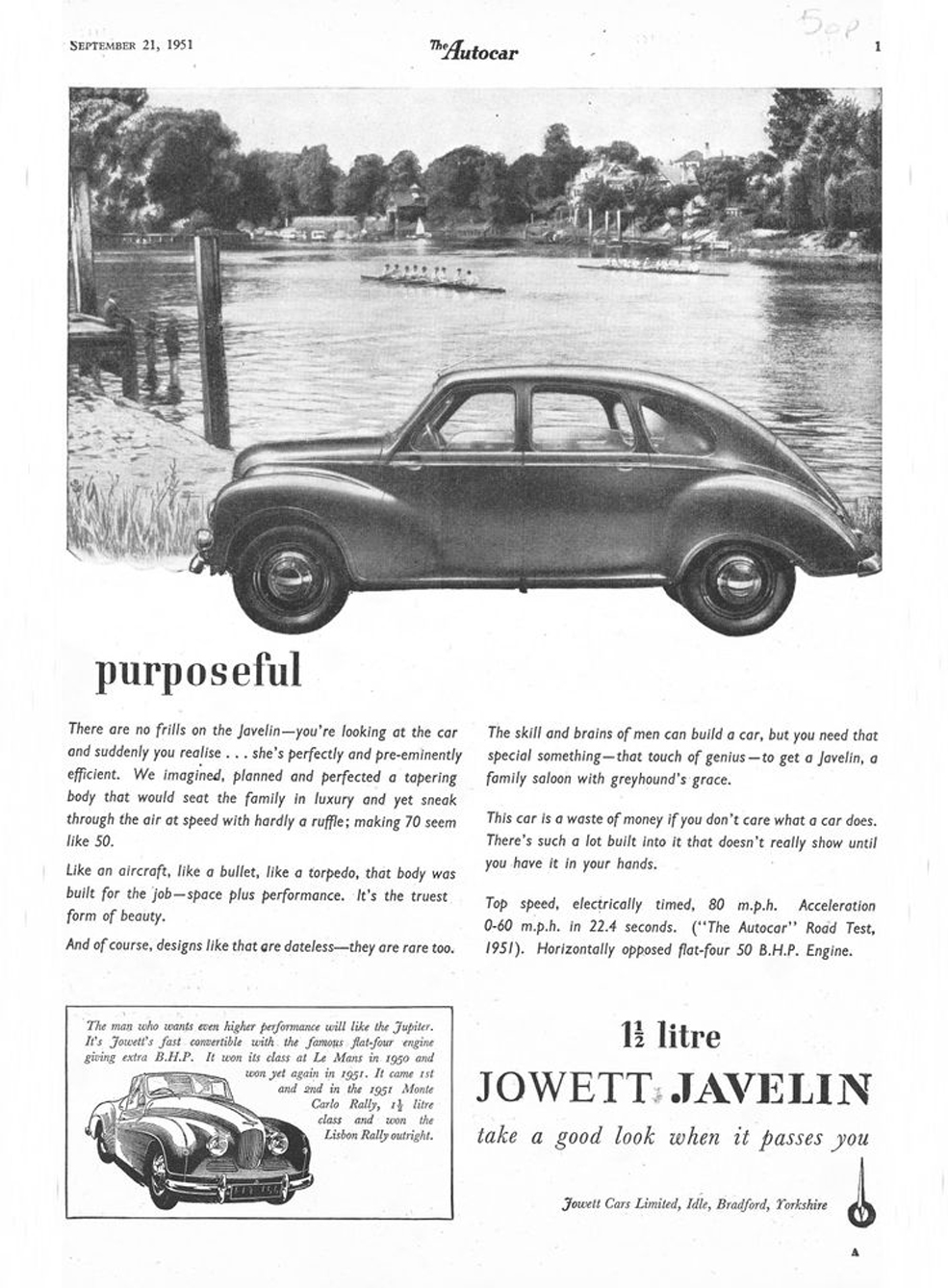 What is acknowledged in advertising circles as the first use of “image” and connotations of fun and adventure in the firm’s cars was penned by Ned Jordan, of the Jordan Motor Car company, Cleveland, Ohio, trading from 1916 to 1931. Artwork adverts for their “Playboy” model of 1923 showed an elegant young woman, cloak and tresses streaming in the wind as she pilots her Jordan roadster across the plain with freedom showing in every line. The slogan was, “Somewhere west of Laramie”. No reference to any special features of the car was considered necessary, just the association of the machine and its name with glamour, freedom and emotional arousal. The car itself was one of the innumerable “assembled” models using bought-in mechanical components. 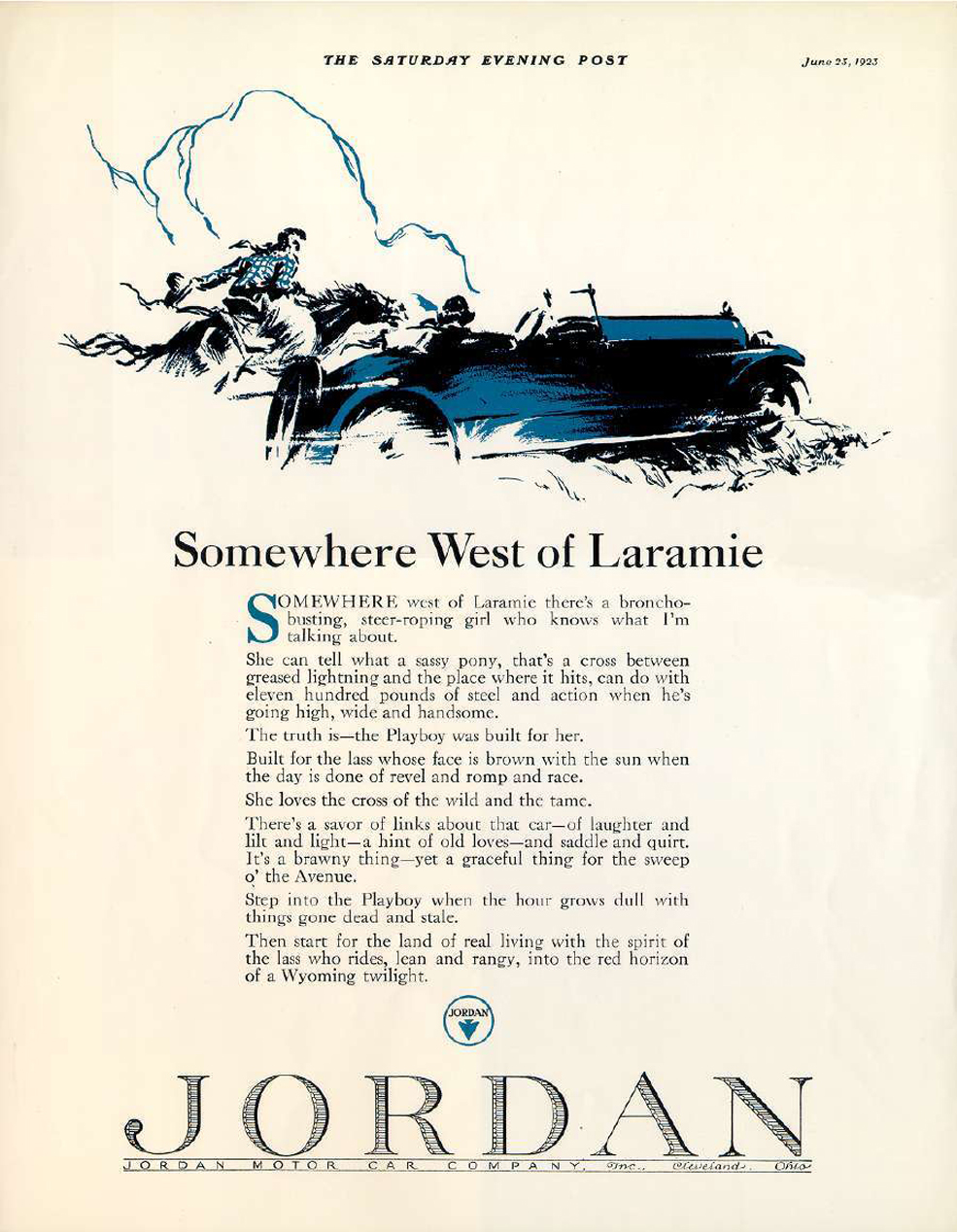