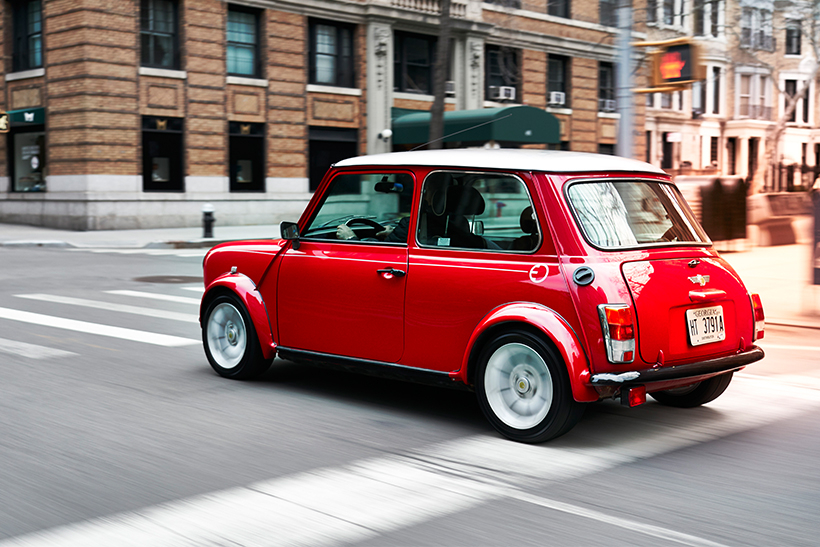 Electric classics are on the march, if the developments of the last week or two are anything to go by. Not only have we seen retro-themed EVs from two major manufacturers, but demand for conversions on existing classics continues to rise.

The biggest news comes from Jaguar Land Rover Classic, which has confirmed that it intends to sell a production version of its all-electric E-Type. The battery-powered sports car made its debut in concept form at the Jaguar Land Rover Tech Fest in September 2017, but was famously propelled into the limelight during the Royal Wedding in May.

The first customer cars are likely to be delivered in summer 2020 and though pricing and technical specifications are yet to be confirmed, we reckon it’ll cost around the £300k mark. What we do know for sure is that it’ll be built at the same Coventry-based Classic Works facility as the firm’s E-Type Reborn restorations, and the production version will be based on the iconic Series 1 model. Unlike other manufacturer ‘restomod’ projects this one will be road-legal, and there will be a conversion service for existing E-Type owners offered too, which will be fully reversible.

An electric powertrain with single-speed reduction gear has been specially designed for the E-Type EV, borrowing technology used for the Jaguar I-Pace SUV. The lithium-ion battery pack has the same dimensions and a similar weight to the standard E-Type’s six-cylinder engine, and is in the same location. The electric motor lies just behind the battery pack, in place of the E-Type’s gearbox, while a new propshaft sends power to a carry-over differential and final drive.

The powertrain and dash instrumentation many be different, but the car’s structure, including its suspension and brakes, has not changed. JLRC says this means it drives, handles, rides and brakes like an original E-Type. The front-rear weight distribution is also unchanged, but the Zero should accelerate faster – its 0-62 sprint time of around 5.5 seconds shaves about a second off that of the original. A range in excess of 170 miles is being targeted, with the 40kWh battery taking six to seven hours to recharge, depending on power source.

Keeping with the retromod theme but with an entirely different realisation is a company you may associate with making guns rather than cars. Russian firm Kalashnikov, better known for the AK-47, has also unveiled a retro-inspired electric car based on the 1970s IZh 2125 ‘Kombi’.

The choice of an old Soviet hatchback as the template might seem unusual, and to be honest, we’re not entirely sure if it’s serious. Nevertheless, it’s proved to be a great talking point, prompting both delight and a fair degree of derision regarding its styling. The IZh 2125 the new CV-1 is based on was produced between 1973 and 1997 and was itself based on the Moskvitch 412. Kalashnikov has dreams of challenging the likes of Tesla, calling the CV-1 an ‘electric supercar’ and saying it has developed a revolutionary inverter that gives a range of 271 miles on a single charge. It’s still very much a concept though, with no launch date or price announced.

But these are not the only firms looking back to go forward. Earlier this year, MINI showcased a one-off classic Mini that had been converted to electric in order to raise awareness of its forthcoming electric production model. While only capable of a mere 65 miles on one charge, it all went in without any chopping of the bodyshell and, like the Jaguar, shows the potential for retro-fitting classics with electric power units.

Indeed, Electric Classic Cars, a Wales-based firm which specialises in converting cars from the ’50s to the early ’80s into EVs, is reporting a waiting list of two years. “The future is bright,” said founder Richard Morgan. “We’ve been converting classic cars for over three years now, not just in the UK but globally. We’ve converted E-Types already, and we’ve done everything from Range Rovers down to Minis and Fiat 500s. It’s something that I think more and more people will start considering – the amount of emails we get per day has gone up tenfold in the last year.”

Options include a complete drivetrain replacement from something like a Tesla, or swapping the original motor for an electric one and retaining the existing gearbox. “You’re taking out the engine and replacing with another, it just so happens that this one is electric, and you’re taking out the petrol tank and replacing it with a 21st century one, which it just so happens is batteries. It’s all very reversible,” added Richard.

Not everyone agrees that silence is golden of course; for many an internal combustion engine and the associated exhaust note is a crucial part of the experience and by removing it, you no longer have the essence of a proper classic car. That’s a view we empathise with, and we certainly hope that traditionally-powered classics can still be driven and enjoyed to the maximum in future. It’s far from curtains for the internal combustion engine yet in any case – sales of fully-electric and plug-in hybrid vehicles currently only account for around 2.5 per cent of the total vehicles sold in the UK. There are a number of reasons for that – the time taken to recharge, for instance. Fundamentally though, it’s a range issue: EVs are just not as versatile as their petrol or diesel equivalents as yet.

That said, new EV sales are on the increase, with more than a million examples now in Europe and even more in China, which is the world’s front-runner in electric-car adoption. And, according to figures from Auto Trader, the electric Renault Zoe is now the UK’s fastest-selling used car. With ever-tighter emission regulations, especially in urban areas, and ever-moving goalposts, the electric vehicle is here to stay. After all, no emissions, no fuel bills, reduced maintenance and the ability to visit major cities without being fined are attractive advantages. Don’t forget that the UK and France have promised to ban sales of new petrol and diesel cars by 2040, and sales of new diesel cars have plummeted.

So with that in mind, any moves to keep the classic experience alive for future generations should surely be commended. Whilst we won’t be giving up our traditionally-powered classics yet, these electric conversions show the future of motoring doesn’t have to be restricted to soulless white goods. Whether the technology will improve enough to convince everyone, only time will tell.