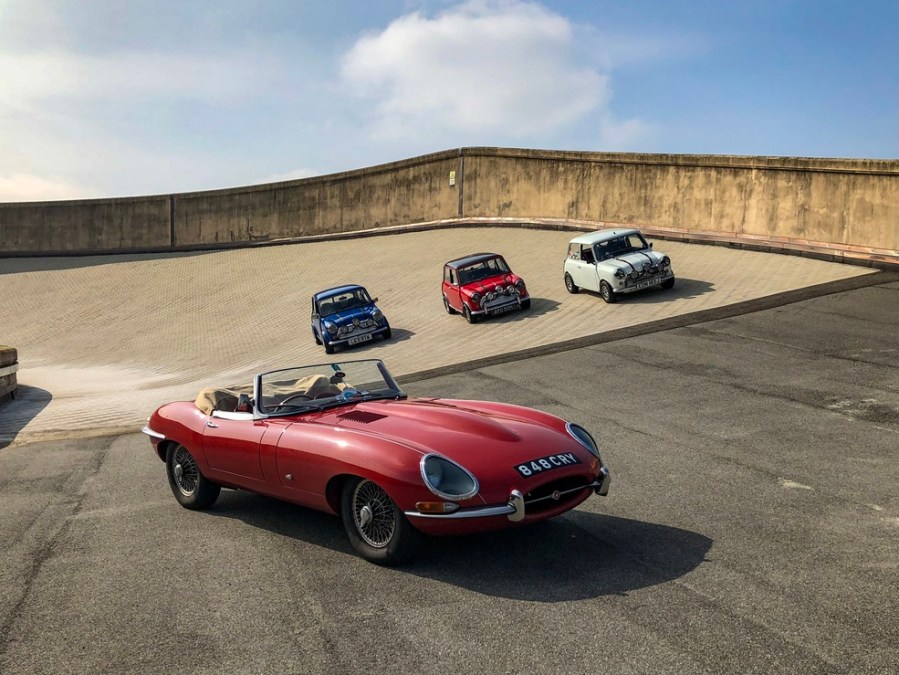 Classic Jaguars enjoyed an 11-day celebration of The Italian Job movie as team of E-Types headed for Italy as the movie turns 50 in 2019.

What do the Jaguar E-Type and the Mini Cooper have in common? The answer is that both are iconic British classics, and both starred in the cult 1969 Michael Caine caper, The Italian Job. So to celebrate the film’s golden anniversary and the big cat’s short but memorable cameo, the Jaguar E-Type Club joined forces with tour operator Classics on the Road to create the Ultimate Italian Job Tour – an 11-day driving event centred on the film’s host city of Turin.

Here at Classics World, we were lucky enough to have a front row seat. Having given his long-suffering project an Italian Job-style makeover, news editor Jeff joined Neil Burgess and Cliff Porter to recreate the famous red, white and blue Mini trio. However, the star of the show was undoubtedly 848 CRY, the red E-type used in the film and subsequently owned by E-Type Club co-founder Philip Porter for over 40 years. Priceless it may be, but it also gets used, joining an excellent turn-out of fellow E-Types, an XK150, an F-Type and another Mini to create a convoy of almost 20 cars. 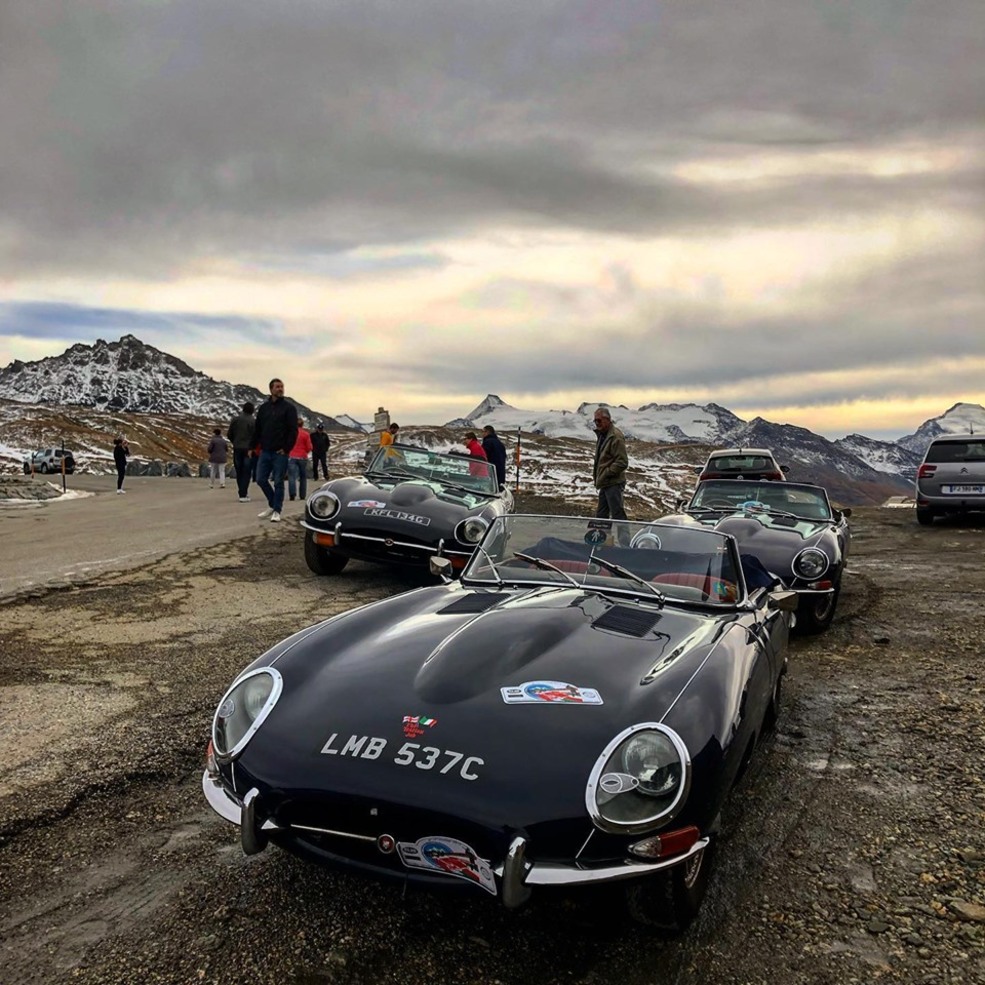 The busy itinerary treated drivers and their companions to some of Europe’s most fabulous roads and scenery as it passed through France, Italy and Switzerland on October 6-17. Following stops at in Reims, Troyes and Lake Geneva, day five saw the cars arrive in Turin for a three-night stay at the NH Lingotto Hotel, once a former Fiat factory and still home to the rooftop test track used in the film. Here drivers had a rare chance to negotiate the famous banking, with David Salamone, who played the driver of the red Mini in the film, retracing the steps of his character Dominic by taking to the wheel of a Mini more than 50 years on.

The tour was also attended by expert Matthew Field, whose new book, The Self Preservation Society – 50 years of The Italian Job, was published earlier this year. Matthew and David were able to provide a unique insight into the film, sharing their experiences during a private film screening at the Lux cinema in the Galleria San Federico – the location for the scene where the police motorbike crashes into the steps.

Matthew and David also provided expert commentary as famous Turin landmarks from the film’s legendary heist and chase were visited. These included the Baroque staircase of the Palazzo Madama where the Minis drive down, the church steps, the weir on the River Po and the location used as the hideout for Charlie Croker’s mob. 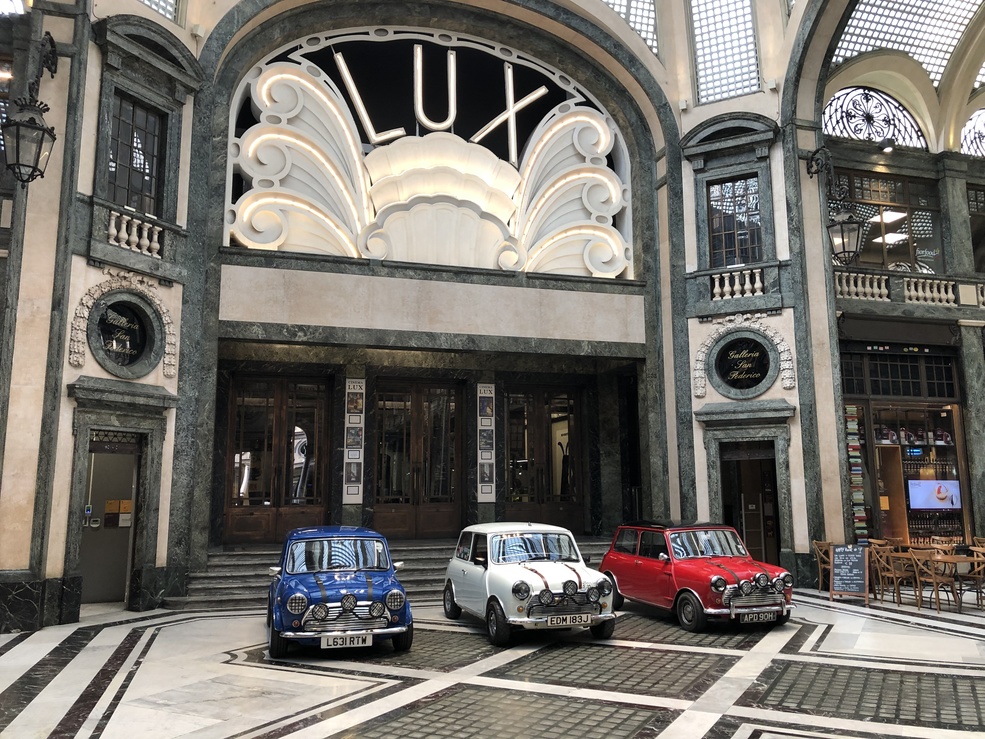 On the Friday evening, the Minis and Philip’s E-Type were placed in Museo Nazionale dell Automobile, where participants were treated to a gala dinner and a guided tour of the collection. A collection of unseen seven prints of photographs taken during the filming were auctioned for over €5000, with proceeds going to the Turin Children’s Hospital.

From Turin, the cars enjoyed a mazy route over the stunning French and Italian Alps for a two-night stay in the Aosta Valley. This included a visit to Mont Blanc, with the following day’s driving including the fantastic Great St. Bernard pass into Switzerland. The final two nights saw stops at Gerardmer and Sedan in France, before the cars returned to the UK after an epic trip truly worthy of its ‘Ultimate’ moniker. All told, it was a great way to celebrate one of Britain’s most iconic movies.