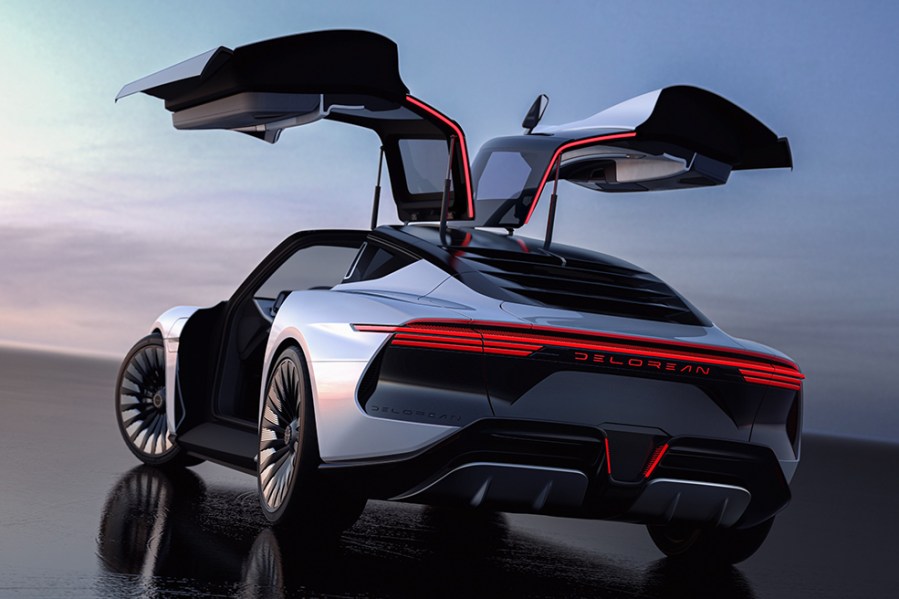 DeLorean is making a comeback, with plans to eventually launch a comprehensive line-up of cars using an array of different powertrains. The brand is being revived by a US-based team headed by CEO Joost De Vries, taking over from Stephen Wynne, who had run DeLorean as an aftermarket support service since 1995.

Spearheading the rebirth is the eye-catching battery-electric coupe shown here. Called the Alpha5, it will make its debut at Pebble Beach in August before being put into production in 2024.

Although the new DeLorean’s design may look largely removed from the wedge-shape silhouette of the original, the new model incorporates some familiar styling cues. Two huge large gullwing doors feature, offering access to both front and rear seats, while a louvre-style rear window echoes the rear-end design of the original. Fans of the original will miss the DMC-12’s bare metal bodywork and squared-off lines, with the new car taking on a much more streamlined and modern appearance.

The new DeLorean is said to have performance to match high-end Mercedes-AMG and Porsche models. Despite it being all-electric, De Vries insists the Alpha5 is “more catering to the internal-combustion crowd than trying to become a faster Tesla Model S Plaid.” The newcomer should have a 0-60mph time of 3.4 seconds, topping out at an artificially limited 150mph, and is said to have a range of more than 300 miles.

De Vries has yet to reveal the DeLorean’s underpinnings, stating instead: “The car is being built in Italy – we’ve outsourced that – and we have some partners on the UK on the powertrain side.”

Pricing is yet to be confirmed but given its performance and high-end aspirations, a price of over £150,000 is expected. Provided the car makes it to production with no hitches, it’ll face up against the likes of the Porsche Taycan and Lotus Eletre.