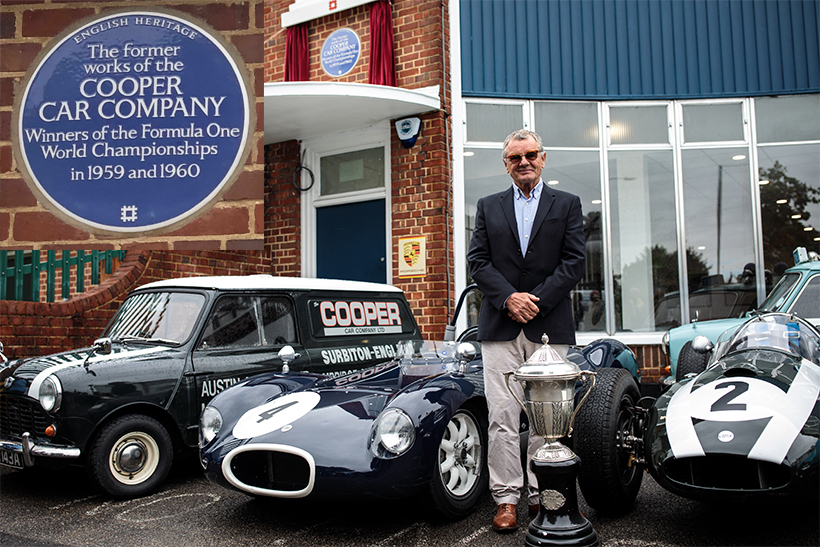 A Surbiton garage once occupied by the legendary Cooper Car Company has been honoured with a trademark blue plaque by English Heritage. The unveiling took place on August 16, and saw several historic Cooper vehicles gather at the historic Hollyfield Road site for the occasion.

Today the Cooper name is known the world over for its association with go faster Minis, but it all started out when Charles Cooper and his son John began building race cars at Hollyfield Road in 1946. Breaking with convention and mounting their engines in the rear would revolutionise motorsport In 1959, Jack Brabham and the Cooper works team became the first to win the Formula One drivers’ and manufacturers’ championships in a rear-engined car. They did it again in 1960, and since then, every world champion has been has sat in front of his engine rather than behind it. As well as its F1 triumphs, Cooper also went on to conquer the automotive market in collaboration with British Motor Corporation, from which the iconic Mini Cooper was born in 1961.

The building remained the home of the Formula One team until 1965 but continued to be used for Cooper car sales afterwards. That was until 1968, when it was rented to the Metropolitan Police. It was unoccupied for two years until 2015, when it was purchased by Porsche specialists Charles Ivey and sympathetically renovated, before reopening in November 2016.

In 2015 it received a ‘red wheel’ plaque by the Transport Trust, and now it’s achieved even wider recognition. “The Cooper Car Company works is a hugely important building to the history of the British car industry,” said Howard Spencer, senior historian for English Heritage. “With a small staff that never exceeded 35, the works in Surbiton achieved great success.

“We’re pleased to be able to recognise this beacon of innovative motoring design with a blue plaque and it’s a testament to the continuing resonance of its legacy that we have so many vintage Coopers and their owners here today to show their support.”

The honour of unveiling the new plaque was given to John Cooper’s son Mike, who is still heavily involved in the automotive world via the modern day Cooper Car Company, which specialists in classic Mini parts. He’s also the proud owner of two classic Mini Cooper Ss; one a Mk1, the other a
Mk2.

“The Cooper family are very proud that the Cooper Car Company’s old works in Surbiton has received a blue plaque,’ said Mike.

“The amazing racing cars that were designed and manufactured there by my father, John Cooper, went on to conquer the world of motorsport.”

Cars present on the day included a 1947 Cooper T4, a 1955 Cooper T39 Bobtail and Bruce McLaren’s 1959 United States Grand Prix-winning T45/51. Also present were two Minivans – a replica of a Cooper Works van and, fittingly given the building’s long-term tenants, an ex-police example.