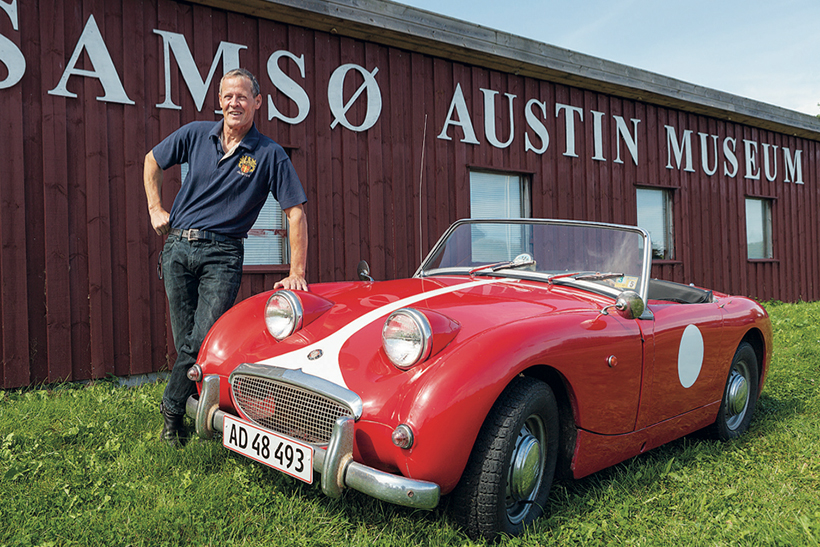 The Samsø Austin Museum – the only institution in the world dedicated to the historic Longbridge marque – is auctioning off its entire collection as one lot then donating the proceeds to charity.

Located on the Danish island of the same name, it began formally in 2005 and became a major attraction on the tiny atoll, attracting 4000 visitors a year. Owner and Austin enthusiast Stefan Wolffbrandt bought his first Longbridge car at the age of 18 in 1985; a non-runner found in a garage, his 1957 A30 was quickly put back on the road and used as daily transport.

That little car planted the seed for the Samsø Austin Museum: until 2013, when the doors closed for the last time, Stefan’s A30 was one of its prized exhibits. He took in Austins (many of them donated to the cause) from all over Europe and the USA, putting them on display ‘as received.’ Barn finds, daily drivers, restored vehicles, crashed cars and local film heroes – their history writ large, Samsø Austin Museum exhibited cars warts and all.

Stefan’s cache grew quickly, eventually spanning six decades of Austin production. At its peak, the museum had 46 cars and an extensive stash of automobilia. “With most of my cars I know their complete history. These are cars that have lived their lives; families have used them and had experiences – and fun – in them,” he explained.

“All of those stories I have tried to tell in my Austin museum. I want to pass that on to the next custodian of the collection, the largest of its kind in the world and unique do to the cars being authentic and original,” Stefan added.

17 shipping containers house the entirety of the Samsø Austin Museum, currently in the hands of auction house Campen Auktioner: “We’re extremely proud and excited to offer the complete museum as one lot. As far as we know, this is the first time a complete car museum has gone under the hammer,” said CEO Finn Campen.

If not exhaustive, Samsø Austin Museum’s collection counts some rare and unusual cars among its ranks. Enthusiasts will come for the 1959 Austin-Healey Sprite which spent 37 years in Texas; they’re liable to stay for the 1950s ‘Counties’ models, a restored Gipsy off-roader and an A110 Westminster used in a bank robbery – complete with bullet-holed windscreen from where it made good its escape in 1970. Alas, Danish inland revenue agents decided Stefan’s collection constituted a hobby rather than a business. Unable to claim running costs – and faced with an enormous fine – Stefan paid the remittance and shut down Samsø Austin Museum for good.

This story has a happy ending, however – one which ended in the creation of a new children’s charity. With the bill paid, proceeds from the sale of the museum are to be channelled into Stefan’s new organisation, known as the Noergaard Wolff Brandt Foundation, intent on improving the lot of Samsø’s vulnerable youngsters.

Bidding is taking place online now as you read this. Stefan and Campen Auktioner can arrange shipment of the museum to anywhere in the world.

Viewing takes place over the Saturday, October 22 and Sunday, October 23 weekend; the final bid will be received on Saturday, November 9 at 7.30pm. More at the Austin Museum