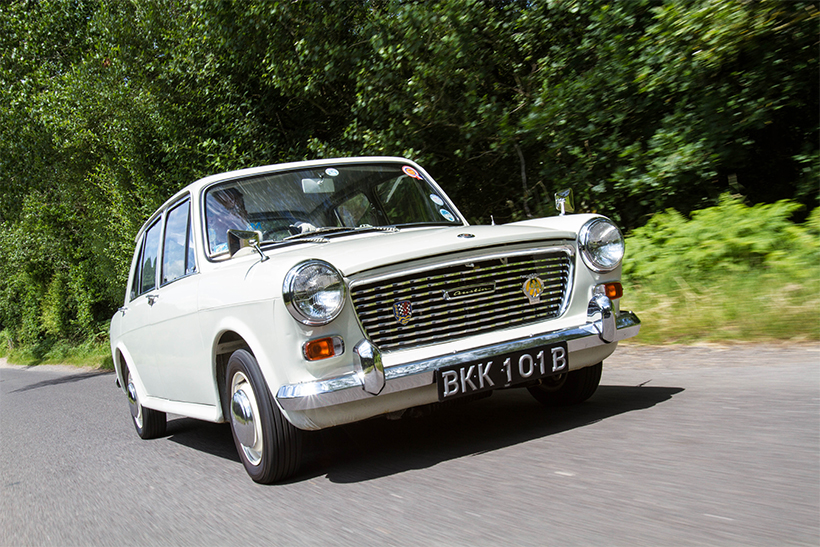 For a car that was Britain¹s best seller for most of it¹s twelve year production run, the BMC 1100 and 1300 are remarkably scarce with survivors being just a tiny fraction of the 2 million cars plus that were produced between 1962 and 1974.

Built in both Cowley and Longbridge, demand for the 1100 was so great that even after Longbridge started building the Austin version in late 1963, the Cowley plant had double shifts working to build enough cars.

1. Alec Issigonis – undoubtedly a talented engineer – insisted on designing the 1100 bodyshell himself despite misgivings from Pressed Steel engineers. Had the 1100 been built today with modern rust proofing techniques it would have been better – but sadly it became an absolute rust buckets.

2. Where does the 11200 rust? Everywhere. Floors, sills, front inner wings (the reinforcing trumpets, outer wings, door bottoms, rear arches, boot floor, the bulkhead near the heater and under the rear seat where you’ll (hopefully) find the transverse box section that the rear subframe bolts into. Many 1100’s failed their second or third MOT on corrosion and they were not easy cars to repair.

3. Very early 1100’s made in 1962 used bored out 848cc Mini blocks due to insufficient supply of 1100 blocks – the 1098 cc engine was also used in the Minor and Midget. This wasn’t a problem and these early motors also used 848cc connecting rods with the pinch bolts for the gudgeon pins. One of these fell out in a long-term test car for a major magazine, writing off the entire power unitŠ

4. Issigonis was obsessed with making the 1100 a car fit for comparison with the Citroen DS, a car he greatly admired. A much better method of engine mounting was devised but early cars could still suffer from fractured exhaust downpipes until a stabiliser was fitted. Unlike the Mini Cooper whose gear change remote housing was bolted direct to the gearbox, the 1100 had an insulating rubber sandwich requiring different gearbox and remote housing castings – more money wasted!

5. At one point, BMC had five different saloon shells for the 1100 going down the production lines. The Morris with the bonnet holes for the chrome strip, Austin without, plus the MG, Riley, Wolseley and Vanden Plas with their different front panels and varying holes drilled in the side panels and boot lids to take various chrome strips. Leyland accountants must have looked at this with utter disbelief.

6. The 1100 was the first BMC car to feature baulk ring synchromesh, sometimes known as Porsche synchro. It was also phased into the Mini and other BMC cars from late 1962 but first gear synchro was phased in gradually for 1968 with the twin carburettor cars and the Mini Cooper S with their close ratio gearboxes getting it first. The first improvement was the B type gears with a reduced helix angle and needle rollers for second and third gears in late 1964.

7. The idler gear was a common failing on these cars. Designed for the 34bhp 850 Mini, it was basically strong enough but production inaccuracies could put the gear slightly out of line and cause problems later on in life. If it wasn¹t addressed quickly, the bearings would disintegrate and shards off metal would wipe out the crank bearings in short order. The 1980 Metro A Plus unit used bigger, virtually indestructible bearings.

8. Some buyers were scared of the Hydrolastic system and early reliability problems with the Mini certainly kept fleet buyers at bay. But in reality it was exceptionally reliable and about the last part of the 1100 to give any trouble. Today, they can be rebuilt and actually swapping a dead one isn¹t that big a job but you won’t find many garages that still have a Hydrolastic pump in the workshop!

9. The 1300 power unit looked like an S unit at first glance but was quite different. The block did away with the traditional rear tappet covers and had two small core plugs at the flywheel end. The crank was EN16 steel (tuftrided on twin carburettor units) with bigger big end bearings and narrower main bearings. Twin carb engines used the 11 stud head used in later Cooper S units but not the Cooper S distributor.

10. The 1100 could have sold well in the USA. Neat two door MG1100’s went first in 1963 but failed to capitalise on the success of the Midget and MGB. Second time around, the Austin America – a federal version of the two-door Austin 1300 – similarly flopped and didn¹t even challenge the reliable Beetle or Toyota imports. Reliability issues and terrible dealer support killed it dead along with major problems with the AP automatic versions.