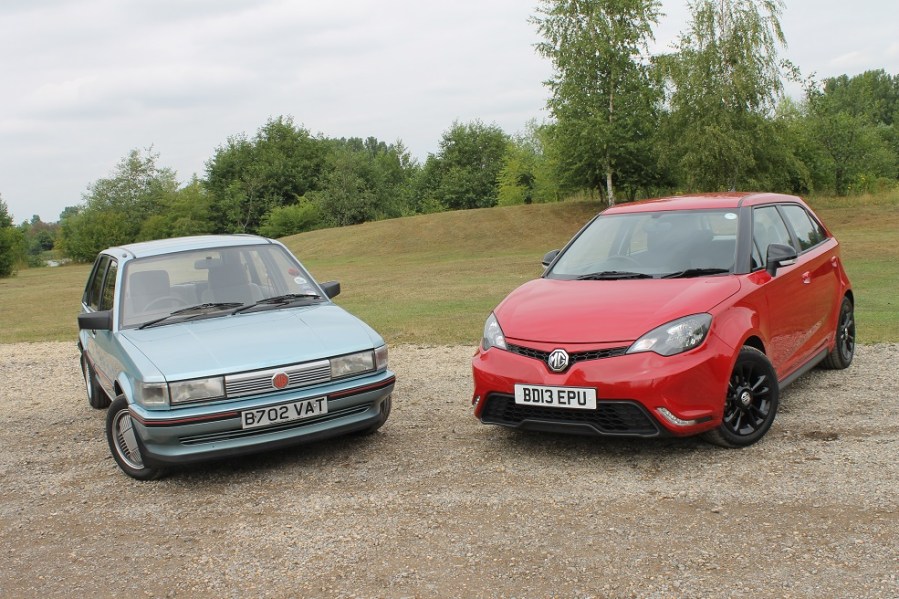 Since its creation in the early 1920’s, MG cars have been controlled by a succession of different companies and organisations and today this famous sporting brand is going from strength to strength under the direction of the Chinese-based automotive giant SIAC Motor Corporation.

Although the MG brand was shelved by British Leyland in 1980 when MGB production came to an end, the famous octagonal badge reappeared on the MG Metro two years later. It looked doomed again in 2005 when parent company MG Rover went bust. The marque was saved by Chinese based Nanjing who went on to form Longbridge based NAC MG UK and, in early 2012, Nanjing merged with a competing Chinese automotive company to form the giant SAIC Motor Corporation. Today a revitalised MG Motors continues to be one of the UK’s fastest growing automotive brands and the company’s current line-up of technically advanced motors is a world away from the early MGs produced by Cecil Kimber at Morris Garages.

William Morris started building bicycles in Longwall Street, Birmingham. By 1911 Morris had turned his attention to motor cars and was selling and repairing various makes from the rebuilt premises, now renamed Morris Garages. In 1922 William Morris appointed his head salesman, a young Cecil Kimber as general manager. As well as running the showroom and garage, Kimber was also a dab hand at designing special bodywork. The MG name, based on the initials of the garage, first appeared in 1923 on a Kimber bodied bull nosed Morris Cowley special in which Kimber won gold in the Land’s End Trial. Although this winning car is claimed to be the prototype MG, the model recognised today as the first ever MG, or Old Number One, is a preserved pointed-tail two-seater.

By 1924 a range of rebodied Morris and MG badged models was being sold as ‘Kimber Specials’ and an overflowing order book resulted with MG assembly taking place at the Alfred Lane works and later at a larger premise in Barton Road. Further expansion saw fledging MG production being transferred to a separate factory in Edmond Road in Cowley close to the main Morris works. In 1928 a Kimber bodied 2.4-litre MG Six was displayed at that year’s London Motor Show and not long after, MG production was transferred to an old leather works in Abingdon. In 1930, the year MG went racing, the MG Car Company Ltd was incorporated and although William Morris personally owned the company, he eventually sold his holdings in MG to Morris Motors in 1935, the lead company in the Morris Organisation. 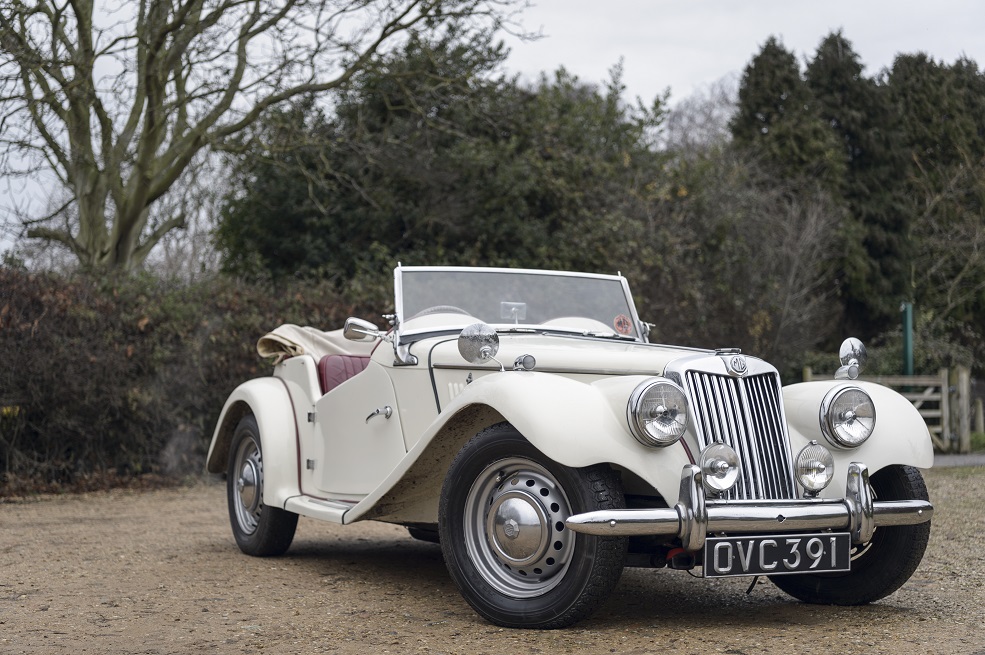 Before MG became part of Morris Motors, the Abingdon based MG Car Company had produced a string of successful models that included several Midgets, K-Type Magnette plus the L and M-Type Magnas. One of the first models to be built after MG came under the control of Morris Motors was the 1936 TA Midget, the first of the company’s T-Series sports cars. By the time the Second World War broke out in late 1939, Morris Motors and its MG, Riley, Wolseley and SU Carburettor subsidiaries had all become part of the Nuffield Organisation.

The final line up of MGs built before the war were the SA 2-litre, TA/B Midget, 1.5-litre VA and 2.6-litre WA. During the conflict, Cecil Kimber left MG over a dispute about wartime production and sadly lost his life in a train crash in 1945 at Kings Cross station. After the war the first car MG produced was the two-seat TC, the model that would find its way to the North American market. This was quickly followed by the 1947 YA saloon and two years later the covers came off the hugely successful TD Midget. In 1952 Morris Motors merged with the Austin Motor Company to form the British Motor Corporation (BMC). MGs in production during the year of the merger included the YT open topped four-seater, the YB saloon along with a Mk2 version of the 1.2-litre XPAG powered TD Midget. 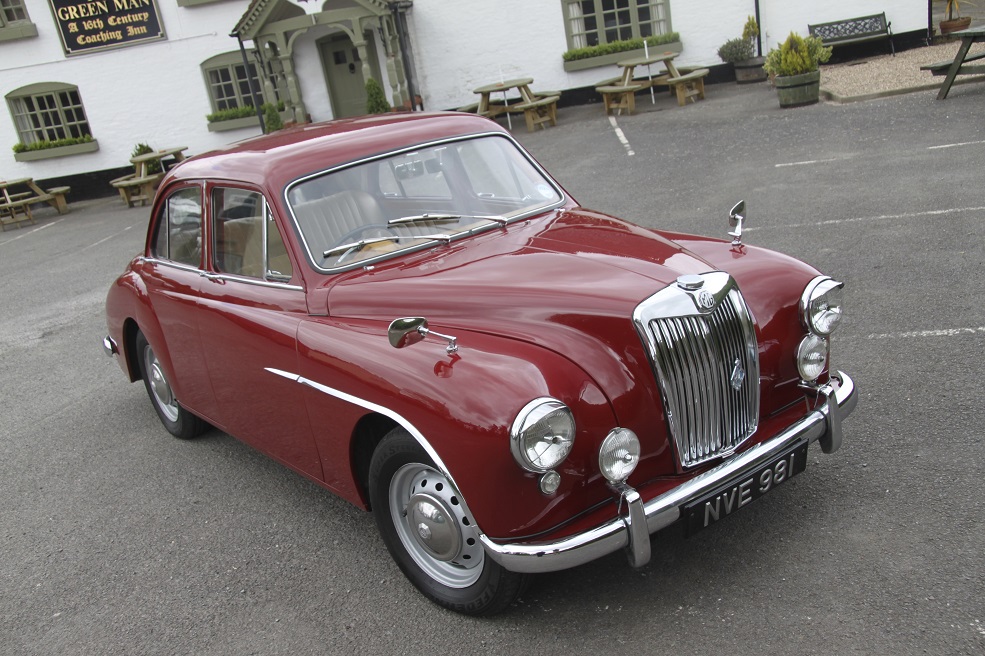 Although now an integral part of the newly formed BMC, MG was still referred to as the MG Car Co. At this time, long-time service manager John Thornley was appointed general manager. Although the 1953 TF was a traditional body on frame design, the unitary constructed ZA Magnette was based on a Wolseley 4/44 and became the vanguard of a stream of post war badge engineered MG saloons. Rather than adapting the aging XPAG unit from the early TF, the stylish ZA saloon was powered by an Austin sourced B-Series 1.5-litre inline four, an engine that would also go on to power the TF’s successor, the 1956 MGA. Produced in two formats – an attractive coupe and a canvas topped convertible – the MGA proved a top seller for MG, although a twin-cam version introduced in 1958 was dropped due to its problematic engine.

A 1600 OHV powered MGA came on the scene in 1959 and the revised Mk2 was unveiled shortly before the introduction of the all-new 1.8-litre MGB in 1962 along with a MG version of the top selling A-Series powered front-wheel drive ADO16 saloon. By now the ZB Magnette had been replaced by the badge engineered Farina styled Mk3 Magnette, while a year earlier the new unitary constructed Midget had arrived on the scene. In 1966 BMC was renamed British Motor Holdings following BMC’s merger with Jaguar and a subsequent coming together with the Leyland Motor Corporation two years later formed British Leyland Motor Corporation, a move that would result with the MG Car Company name finally being consigned to the history books. 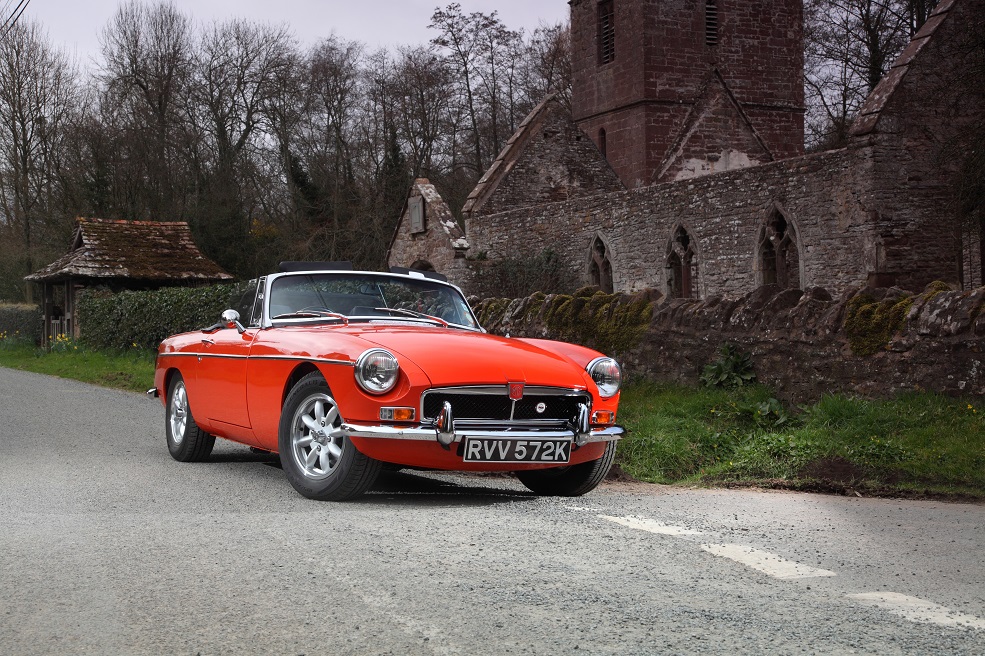 While earlier rationalisation resulted with Austin-Healey 3000 production being moved to Abingdon, the 1967 six-cylinder MGC was no match for the discontinued big Healey and the C-Series powered ‘B was quietly dropped in 1969, a year after the last Farina badged Magnette was produced. The British Leyland Motor Corporation was nationalised in 1975 and renamed British Leyland (BL), although by now the MG name was regarded as just another marque. Unfortunately for MG, the top brass at BL always seemed biased towards the Triumph badge and other than the MGB V8, no new MGs were introduced during the 1970s. The MG badged ADO16 disappeared in 1973 and the Midget went in 1979. MG was now down to a single model, the rubber bumper clad MGB and in 1980 BL pulled the plug on ‘B production and later disposed of the Abingdon factory. 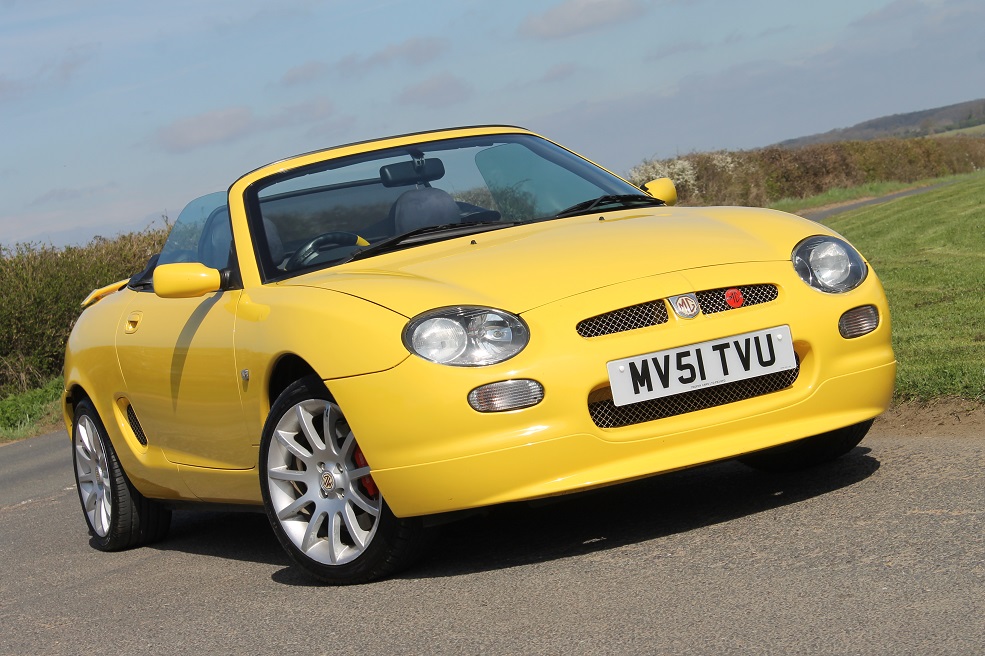 In 1982 BL created the Austin Rover Group and the MG name was revived with the introduction of the Longbridge produced MG Metro, a three-door hatchback that was quickly followed by the barnstorming 110mph MG Metro Turbo. The marque was further revived with the introduction of the MG Maestro 2.0 EFi, while an MG Montego 2.0 EFi followed on a year later. High powered turbo versions of the MG badged Maestro – noted at the time as the world’s fastest hatchback – and the Montego helped further boost MG’s revived image. However, it was all change again in 1986 for MG when the volume production arm of BL was rebranded Rover Group PLC and shortly after being renamed, the Rover Group was sold to British Aerospace in 1988.

The MG badged Metro was withdrawn in 1990, while MG Maestro and Montego production soldiered on until the following year. A throwback to MG’s glory days was the introduction of the Rover V8 equipped MGB RV8 in 1992. Two years later British Aerospace sold the Rover Group to BMW. This proved a lifesaver for MG as German cash flow helped finalise the development of the 1995 introduced 1.8-litre K-Series powered MGF and the new mid-engine sports car went on to be a massive success for the now German owned brand.

BMW sold the Rover Group’s car and engine manufacturing assets to the Phoenix Consortium in 2000 and the revived company was renamed MG Rover. The sporty MGF continued to be well received. An expansion to the MG line-up got underway in 2001 when MG Rover launched three new MGs based on a series of existing front-wheel drive Rovers. These were the Rover 25 based MG-ZR, mid-sized 45 based ZS and larger Rover 75 based ZT. A decent range of petrol and diesel fuelled engines were offered across MG’s Z-car range, even including a 4.6-litre V8 option for the rear-wheel drive MG ZT-260.

In 2004 MG unleashed the 320bhp SV, a two-door coupe that had started off as the Italian produced De Tomaso Bigua, which later morphed into the Qvale Magusta before becoming the British assembled and MG Sports & Racing developed MG SV. However, MG’s masters were rapidly running out of cash and even though intense negotiations between cash strapped MG Rover and a number of prospective buyers were taking place, MG and Rover car production at Longbridge came to a halt on April 7, 2005.

The remains of bankrupt MG Rover were eventually acquired by the Chinese Nanjing Automotive Company and promptly renamed NAC MG UK Ltd. Work started almost immediately exporting assembly equipment to China and no cars were produced at the stripped-out Longbridge plant until the limited-edition MG TF LE500 went on sale in September 2008. The next MG launched by NAC and assembled at Longbridge was the TF135 and this was followed by the TF 85th Anniversary to mark 85 years of MG. In 2007 Nanjing Automotive merged with the Shanghai Automotive Industry Corporation, one of bankrupt MG Rover’s earlier suiters, to form SAIC Motor and a new chapter in MG’s long and eventful history was about to get underway. 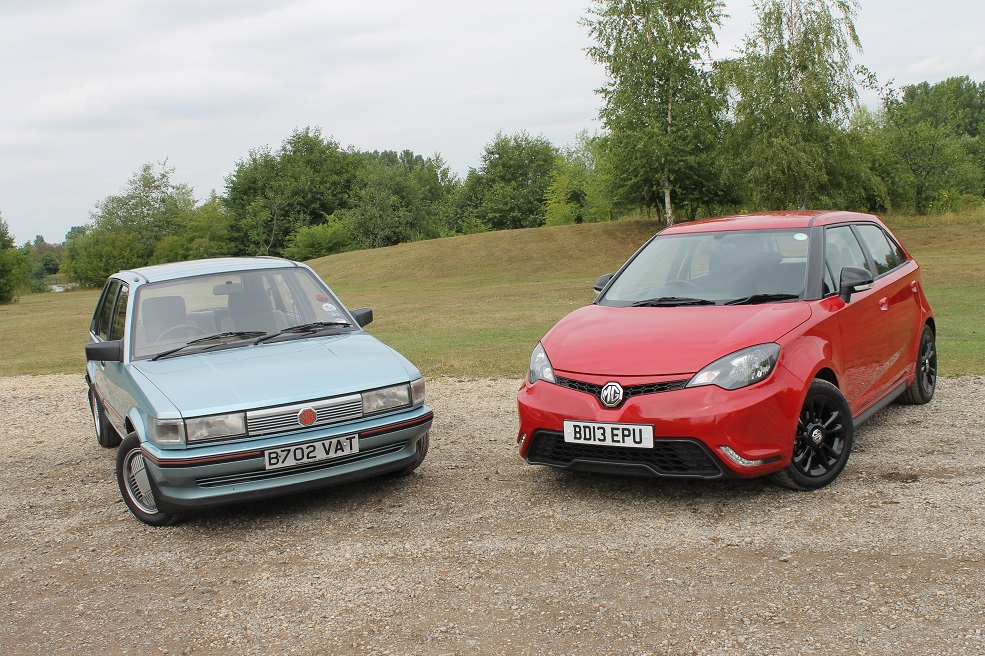 NAC MG UK was renamed MG Motors Limited early in 2009 and the first all-new MG badged car for 16 years, the MG6, was officially unveiled at Longbridge on June 26, 2011, by the visiting Chinese premier Wen Jiaboa. The following year, SAIC had invested £450 million in MG Motor and in September 2013 the MG3 went on sale. MG celebrated its 90th birthday in 2014, the year the company marked a record-breaking period as the fastest growing automotive brand in the UK. A return to motor sport for MG resulted with a specially prepared MG6 winning the 2014 British Touring Car Championship, a result that helped the MG brand to re-establish itself and prosper.

With MG’s Abingdon factory a distant memory and a new town taking over the former Longbridge site, development of MG-badged vehicles now takes place at a London based design studio headed by styling director Carl Gotham and the cars are built in China. The current MG line-up consists of the 2016 launched GS, which was MG’s first Sports Utility Vehicle, and the larger ZS SUV range introduced in 2017 originally badged as the XS. A new MG3 super mini arrived on the scene in 2018 and with electric propulsion currently very much in the news, the recently introduced electric MG ZS EV SUV, powered by a 44.5kWh water cooled lithium-ion battery pack, opens a new chapter in the long and eventful history of this highly respected sporting marque.