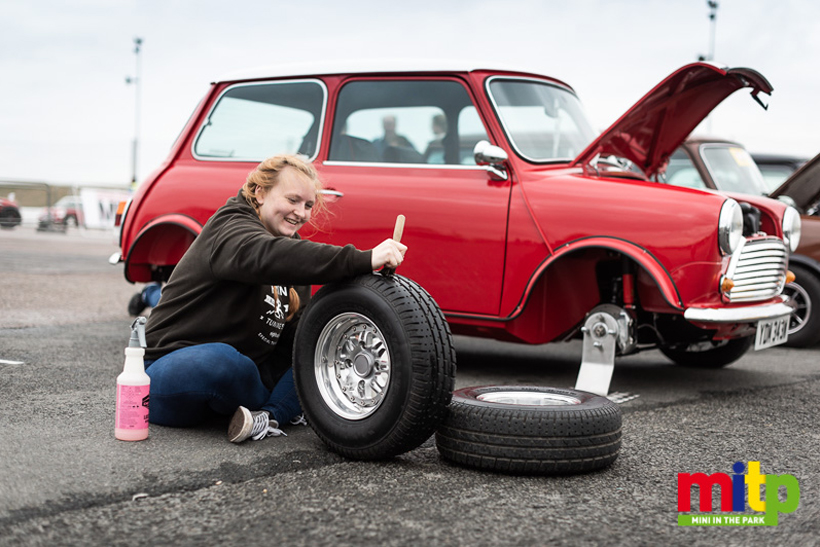 Minis of all ages and sizes at Santa Pod spectacular

Despite the looming grey skies, Mini fans travelled from all across the UK and beyond to join their fellow enthusiasts at Santa Pod Raceway for the 22nd annual Mini in the Park. The event brings together an electric mix of classic Minis and modern MINIs at the Northamptonshire venue, with plenty of action and activity both on and off the famous quarter mile.

For Mini fan Chris Birkby, it was certainly a day to remember. He was the lucky winner of a 1989 Solar Yellow Mini Mayfair, given away in a raffle by the show promoters and sponsored by specialist insurers Carole Nash. But that was far from the only highlight, for the Pride of Ownership once again proved popular. Billed as a more laid-back competition than more traditional concours or show and shine contests, the winners included Keith Brownsell and Lizzie Horne in the Classic Mini Modified and Classic Mini Original categories, with Rob Goodwin taking honours in the Pride of Ownership Wildcard category.

As always, club displays were at the heart of the show, with an exquisite display from online communities and various owners clubs. The judges had a very difficult task on their hands when choosing the ‘Best Club Stand’ winners., but after much debate the awards finally went to Essex Mini Owners Club for Best Regional Club Stand, The Mini Forum for Best Classic Club Stand and LuxeMini for Best Modern MINI Club Stand. Clubs also took part in the now traditional ‘Club Mini Push’, which saw the Ipswich and Suffolk Mini Owners Club beat the competition for the second year by pushing a classic Mini around an obstacle course in the fastest possible time. Also attracting competition was the Great Mini Bake Off, which returned for its second year and was won by Katie Steele.

Alongside the show ran the Mini-Only Run What Ya Brung, with some running up drag strip for fun and others concentrating on seriously fast quarter-mile times. And if anything did fail, there were plenty of traders on hand to supply parts, as well as inspire future builds with the latest tuning parts. Complete interiors and wheels could be purchased too, along with memorabilia and even miniature fibreglass bodyshells for those wanting to encourage a younger generation of Mini fans.