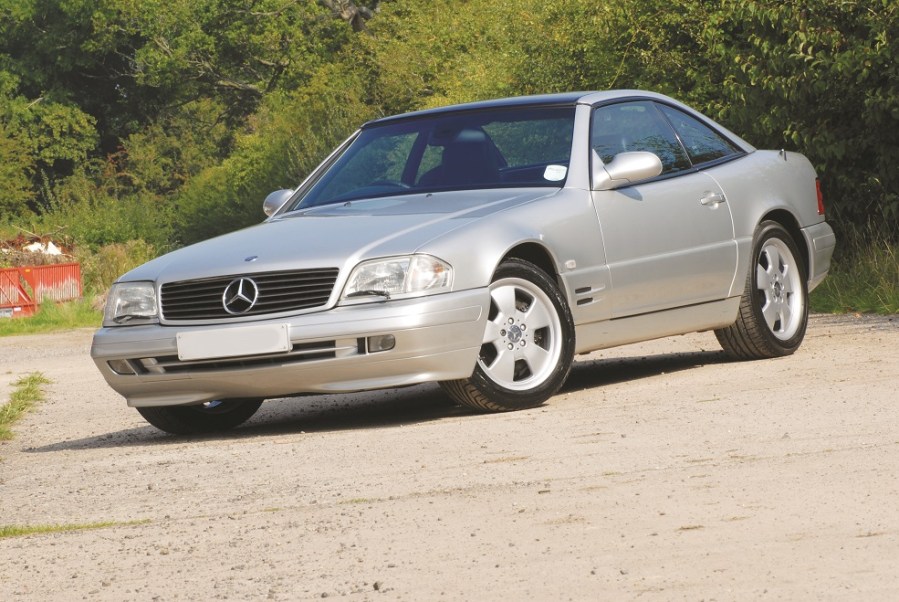 Missed out on the R107 generation? Then the Mercedes R129 SL could be your second chance.

The ‘W113’ Pagoda was the model which kicked off the idea of the modern SL range and it’s the second ‘R107’ generation which has caught the imagination of the classic car world but the third generation, the so-called ‘R129’ model saw the SL reach its technical peak. Offering unparalleled levels of safety and performance it was a massive leap from the R107 which by the time the R129 was launched in 1989, was beginning to show its age.

The new car was anything but dated and in appearance could be only German and only a Mercedes. The delicate lines of the older car were replaced by a chunky, straighter shape, no less elegant in its proportions but much more aggressive with its chiselled snout and wide-arched rear.

At launch, the R129 was touted as being the safest open car in the world thanks to some clever engineering. Most obvious was the automatic roll bar which shot up automatically, deploying in 0.3 seconds if the car’s sensors determined a rollover was imminent. Another trademark feature of these cars is the integrated seat assembly, containing the seatbelt anchorage which aims to isolate the occupants from the force of side impacts absorbed by the floor.

The body engineers also concentrated on the design of the A-pillar, the base of which takes most of the force of a rollover in a convertible. The steeply raked screen pillars would have creased easily but this was solved by using a high-strength sheet metal construction reinforced with tubing.

So proud was Mercedes of the crash performance of the SL that launch publicity made almost as much of the safety as the performance but the new car was no slouch either. At launch, just three models were offered: the 3-litre straight six badged as 300SL, the same engine with a twin-cam head marketed as the 300-24 and the 5-litre V8-powered 500SL. 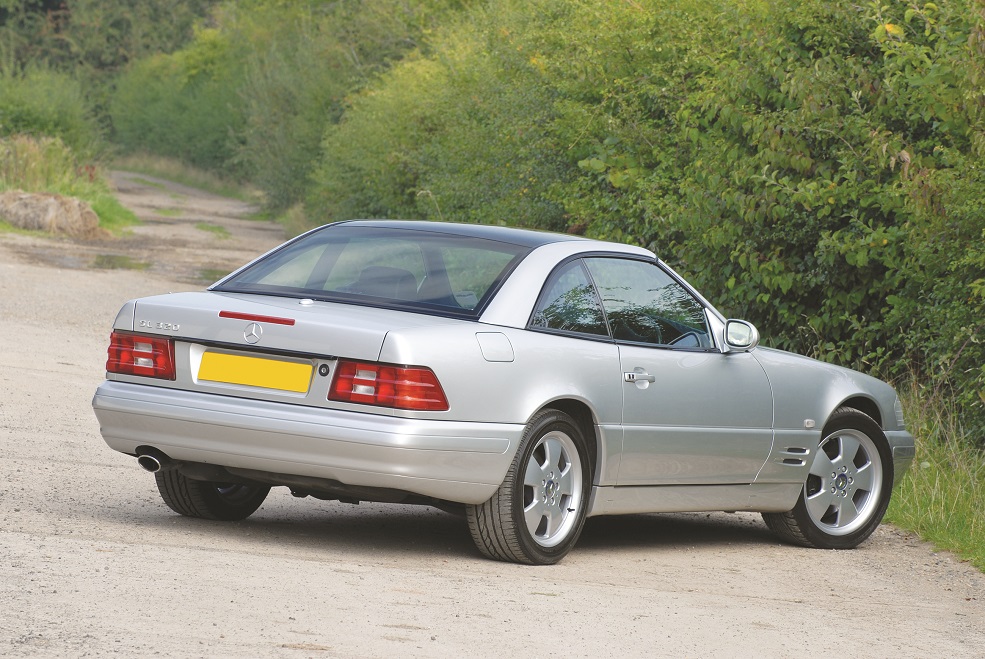 The mighty 6-litre V12 arrived in 1992 and in 1993, the 24-valve 280SL and 320SL joined the range, effectively developed from the 300-24 engine. In 1995, a facelift introduced softer body styling details including reshaped bumpers, six instead of seven grille slats and smoother lower body side mouldings with two instead of three wing vents. The panoramic glass hardtop roof became an option at this point.

A second facelift followed in 1998, identified externally by the rounded door mirrors and colour-coded handles, with the long-serving straight-six engines replaced by V6 units, the badging now reversed to read SL280 and SL320,  with the V8 now the SL500 and the V12 the SL600.

The R129 was replaced in 2001 by the R230 but the step in technology wasn’t anything like as big a leap as it was from R107 to R129 and there are many who regard the R129 (and its companion the W140 S-Class saloon) as being the last Mercedes to be truly over-engineered in the traditional sense.

Later SLs don’t quite have the same feeling of solidity as the R129 and the marque’s quality issues in the early 2000s are well known. Just five minutes behind the wheel will explain just why Mercedes commanded £54,260 in 1995 for the entry level SL280 and a crushing £98,330 for the SL600: the doors have the heft of a field gate and details abound like the centre glovebox which uses a cantilevered hinge arrangement to lift it vertically in a lovely damped motion.

This translates to impressive reliability in a car which by ’90s standards was pretty complex and the earliest of which are now 25 years old. Sitting down to chat with the experts at the SL Shop it was surprising just how short the list of potential trouble spots is… at least, that is if you buy a good one which has been maintained properly. As with many modern classics of this type, they may be a fraction of their original price today but they still carry the running costs of a £60,000+ car in some ways.

It pays then to tread carefully so here’s what you need to know before rushing in. 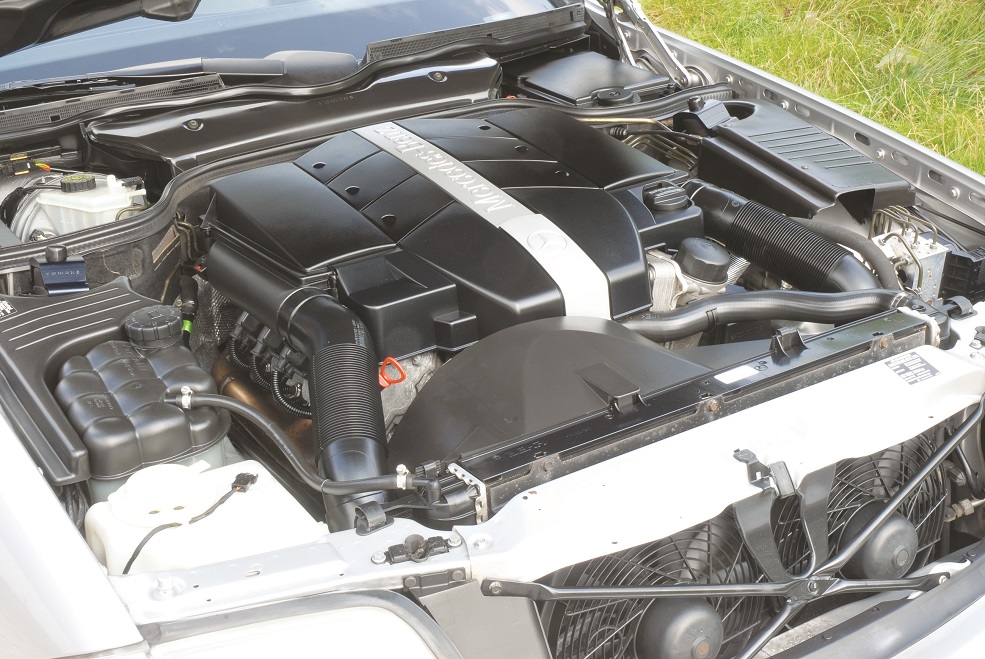 Really pretty tough, reckons Bruce Greetham at the SL Shop. The early cars with the 2.8 and 3.2-litre straight-six engines can suffer problems with the wiring loom to the engine degrading and can leak oil from the head gaskets but the V6 and V8 engines are generally very reliable with no Achilles’ Heels to worry about. Maintenance is key though: for example, if the cam chain fails on the V6 then it’s very much game over.

The early 320 can suffer from the crankshaft damper pulley breaking up which will damage the timing case cover.

Catalytic converters can break up and start to rattle simply due to age. Aftermarket parts are available for around £250 per side but specialists will prefer to fit the genuine Mercedes part at nearer £1000 per side.

The front strut top mounts can tend to wear on all cars, slightly more on V8s owing to the extra weight on the front end. It’s not always obvious from behind the wheel and Bruce suggests checking under the bonnet for cracks in the rubber top casing.

Battery drain can be one of the biggest issues with the R129, advises Bruce. If the car isn’t being used regularly, then investing in a good trickle charger/conditioner like the CTEK is a smart move. The worst thing to do is to jump start the car using a booster pack, which can spike control modules including the roof control module.

The early cars suffer with electrical issues more than the facelift cars, including wiper relays, ABS and roof modules.

The R129 escaped the bodywork issues of many other Mercedes models of this era and the only real water trap is at the leading edge of the front wing by the bumper. Keeping this clean is sensible, but elsewhere the worst that’s likely to happen is the wheelarch lips starting to look scruffy.

The convertible roof is a high quality affair and thanks to the hardtop it doesn’t have to suffer the ravages of winter like many convertibles. The R129’s all have power roofs though, so check it all works.

If the plastic rear window of the convertible roof is cracked then it doesn’t necessarily mean a new roof: a replacement window can be stitched in by a specialist trimmer. 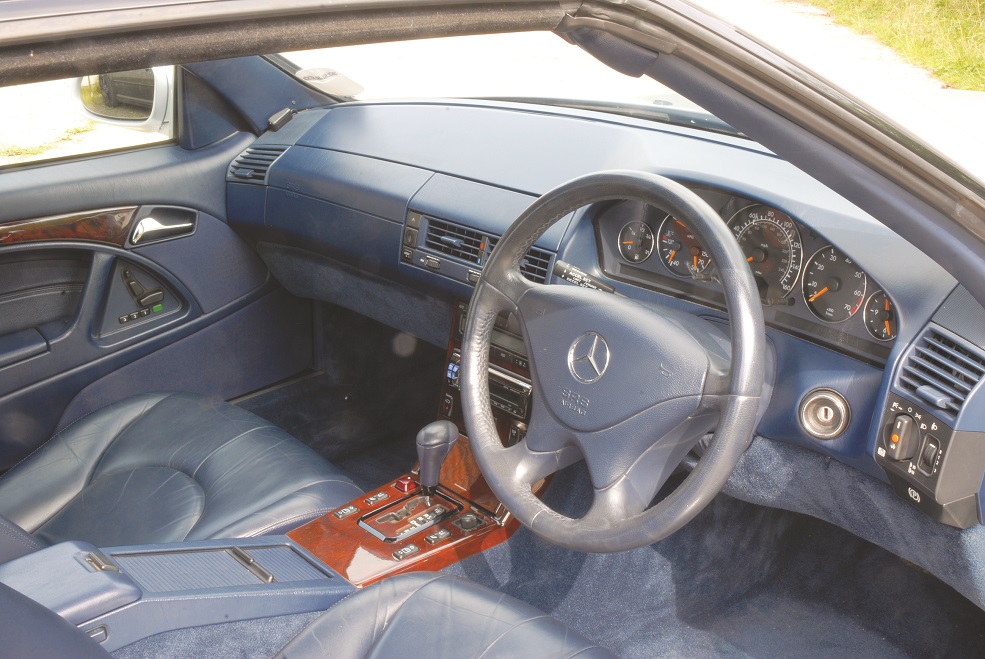 It’s the interior which really gives these cars their feeling of solidity and if you find more than a couple of small things wrong then you’re probably looking at a car which has had a hard life: bits just don’t come away in your hand like an ’80s Alfa.

That said, check the air conditioning blows cold as chasing faults in the system can get costly, while it’s also worth checking that all the switches and buttons do what they should. Wear to the side bolsters of the seats, especially on the driver’s side, is common and is tricky to avoid in daily use but is often easily sorted with a product like Gliptone’s ScuffMaster colourant.

Yes, you’ll see these cars for £5000 to £6000 but they will have correspondingly higher mileage, generally 80-90,000. The R129 does in fact wear the miles better than most other cars, so if that doesn’t bother you then a higher mileage example with a good history can be a good bet but do expect to get your hands dirty bringing it up to scratch.

The cheaper cars can be something of a mixed bag: you could get extremely lucky and bag yourself a bargain, or you could end up forking out the cost of buying a better one in the first place. Don’t overlook the cost of bringing a tatty one up to scratch as just the cost of a set of tyres can make the eyes water.