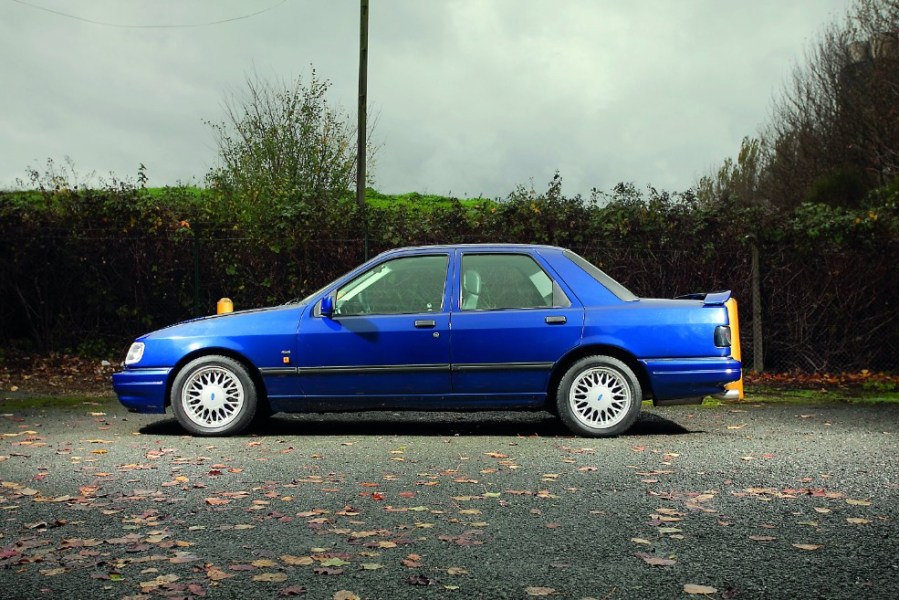 Supercar performance and everyday practicality made the Sierra RS Cosworth unbeatable on the road as well as the track. Here’s the lowdown on the fast Ford legend.

Ford’s arguably unrivalled expertise at taking its best-selling ‘cooking’ models and creating a sporting icon was well documented by the mid-1980s, but if there was ever any doubt over the manufacturer’s ability, then the Sierra RS Cosworth firmly answered any non-believers.

Even at the very height of the hot hatch era and when prestige manufacturers were pushing out increasingly rapid mid-sized saloons, the arrival of the Sierra RS Cosworth set a new performance benchmark.

From its radical rear spoiler to its blistering performance, what would become affectionately known as the ‘Cossie’ literally blew everyone and ever other rival away, to the point where it assumed legendary status near instantly.

The original three-door version paved the way for 10 years of incredible fast Fords and certainly added a touch of glamour to the Sierra line-up, proving incredibly popular with everyone who got the slightest taste of its winning formula.

Over 30 years later, and the Sierra RS Cosworth is even more desirable. From being a performance bargain at launch to second-hand values dipping as low as £3000 for scruffy four-doors at the turn of the century, any Sierra RS Cosworth now comes with an increasingly high price. With that in mind, securing a sound example is even more important, so here’s what you need to know to avoid the thrashed and the crashed. 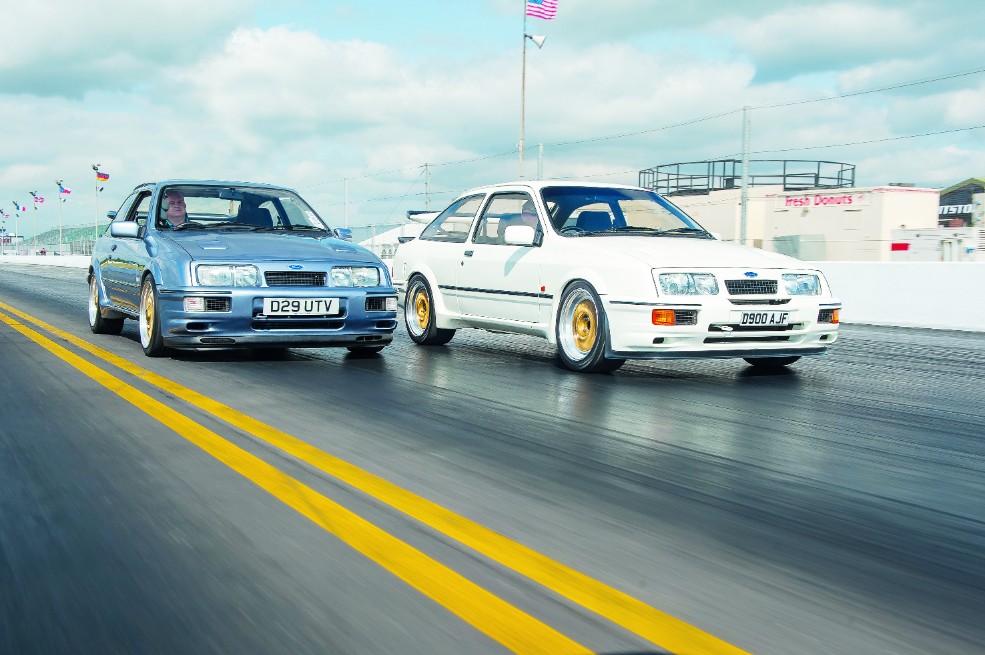 Born out of Ford’s desire to reignite its fiery performance in touring car racing, the original Sierra RS Cosworth made its debut in July 1986.

A collaboration between famed tuner Cosworth and Ford’s Special Vehicle Engineering (SVE) division, the Sierra was developed out of the necessity for Ford to build 5000 production examples in order to meet Group A homologation requirements.

But while Ford’s main goal was to clean up on the world’s racetracks, the Sierra RS Cosworth also wiped the floor with so-called roadgoing rivals.

At the heart of its untouchable performance and fulfilling its namesake was the Cosworth-developed 16-valve and turbocharged ‘YB’ engine, which beneath its new twin-cam cylinder head and sizeable Garrett TO3B turbocharger was essentially Ford’s ever-popular Pinto motor. While the engine’s origins might have been humble though, there was nothing modest about its power or performance, the heavily-reworked 1993cc engine producing 204 bhp – making it the first road car to be listed with more than 100 bhp per litre – and pushing the three-door Sierra to a mind-blowing top speed in excess of 150 mph.

A wild rear spoiler – quickly christened the ‘whaletail’ and which reputedly added an extra 40 lb of downforce at 124 mph – coupled with a Phoenix-produced bodykit, bonnet vents and 7×15 inch Rial alloys gave the Sierra the looks to complement its supercar-chasing performance.

It wasn’t all about speed though, as the Cosworth was the most luxuriously-appointed Sierra to date and it was as comfortable on the school run as it was blasting down the autobahn thanks to its advanced Weber-Marelli engine management.

The highly specialised RS500, a limited production run of 500 track-focused, 224 bhp Sierra RS Cosworths, followed in 1987; but an even greater emphasis on refinement would figure in the model’s next incarnation – the four-door Sierra ‘Sapphire’ RS Cosworth. Launched in 1988, the latest Cosworth merged the original’s mechanicals with the Sierra Sapphire Ghia body shell, there no longer being a need to meet homologation requirements and Ford instead concentrating on creating a plush ‘executive express’ which could take sales away from BMW and Mercedes-Benz. 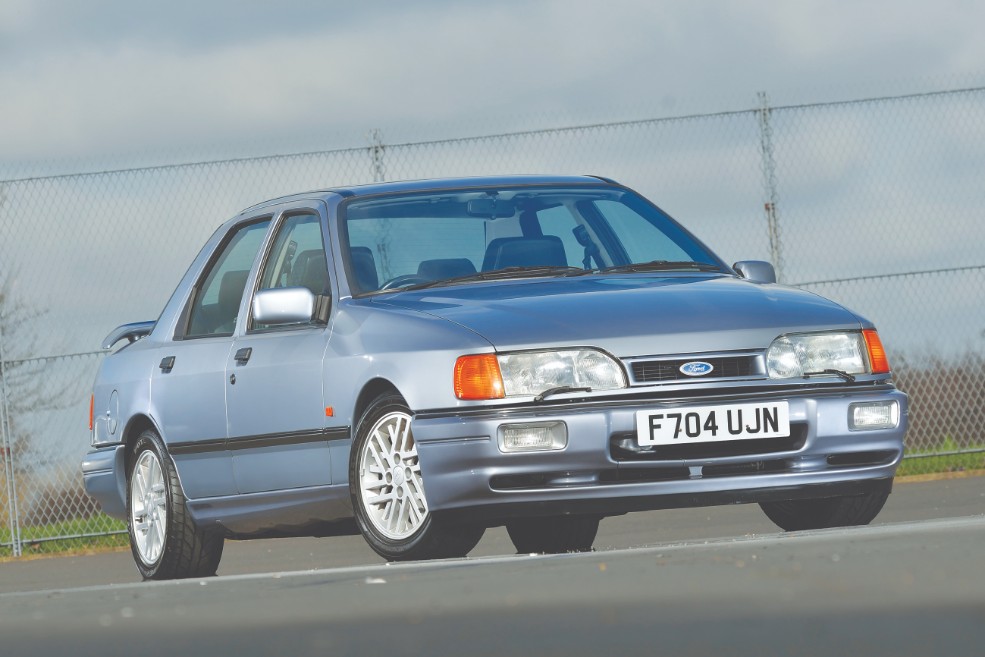 The manufacturer’s drive to tap into the high-performance, luxury saloon market would reach fever pitch in January 1990, with the arrival of the four-wheel-drive version. The drivetrain was needed for Ford’s rallying programme, but on the road the all-drive system (an adaption of the existing Sierra 4×4’s Ferguson-developed set-up) made the Cosworth even more driveable and practical.

There was now also steering column adjustment, remote filler cap and bootlid and the options of leather trim, electric sunroof and air conditioning. In late 1991 the 4×4 would become even more appealing with a facelift that, most notably, included a more contemporary design of alloy wheel and a redesigned fascia.

As good as the 4×4 was though, Ford already had plans for its next Cosworth and with a shift towards producing a highly-effective rally car, the Sierra was phased out by the end of 1992 and replaced by the more agile Escort RS Cosworth.

Although ultimately responsible for ending production of the Sierra RS Cosworth, the Escort RS Cosworth was a more than worthy successor to its crown.

Launched in 1992 and selling alongside the outgoing Sierra RS Cosworth 4×4 for a short time, the latest Cosworth was essentially a much modified Escort Mk5 bodyshell mated to a shorted floorpan and inner wings of its predecessor. Over 50 per cent of the panels differed to those of a ‘normal’ Mk5 Escort and, for diehard fans of the original Cosworth, there was an even more radical rear wing. 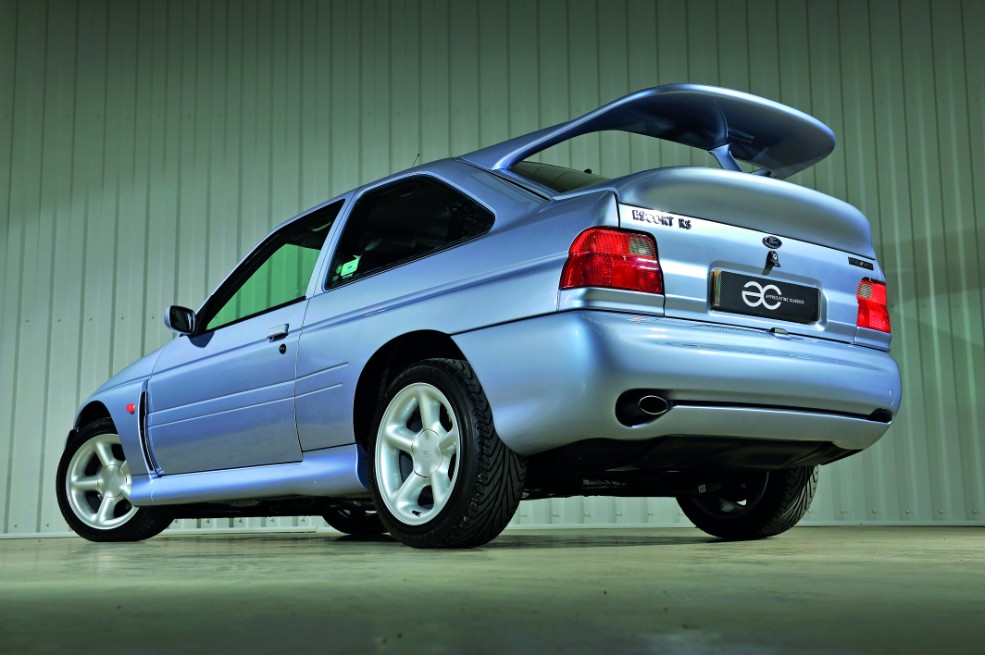 Both ‘Luxury’ and stripped-out ‘Road Sport’ versions were available to  and once again the Cosworth Ford proved incredibly popular, supply quickly outstripping demand. While it was doing the business on the world’s rally tracks, it also grew more versatile on the road with the launch of the more driveable, albeit slightly slower, ‘small turbo’ version in May 1994. However, the eminently usable Garrett T25-boosted Escort couldn’t save the RS Cosworth name and, even at its introduction, sales were dwindling as a result of high insurance costs, a lack of dealer support and a shift in car buyers’ fondness for the RS brand. Regulation changes were the final straw and in 1996 the RS Cosworth was no more. However, over 20 years later the legacy of the high-performance Escort and its Sierra predecessors shows no signs of ever fading.

Whether a three-door or later Sapphire saloon, Cosworths often rust in the floorpan, including the boot, rear arches – particularly on the three-door where the bodykit traps moisture against the metal – suspension turrets, inner wings, bulkhead and sills. The rear chassis rails are also prone to serious rust, although it is the Sapphire that suffers worst, and the three-door can get crumbly in the middle of the rear panel. The central support of the Sapphire’s rear spoiler is also a rot spot. Lift the bonnet to see if where the front wings join the slam panel is rusted and also look for signs of original date stamps and sealant on the wings as many Cosworths will have been used hard and crashed before their classic status. Genuine Ford panels and bodykits, including the three-door’s rear spoiler, often-damaged front grille and rear quarter glass, are very expensive and difficult to replace. 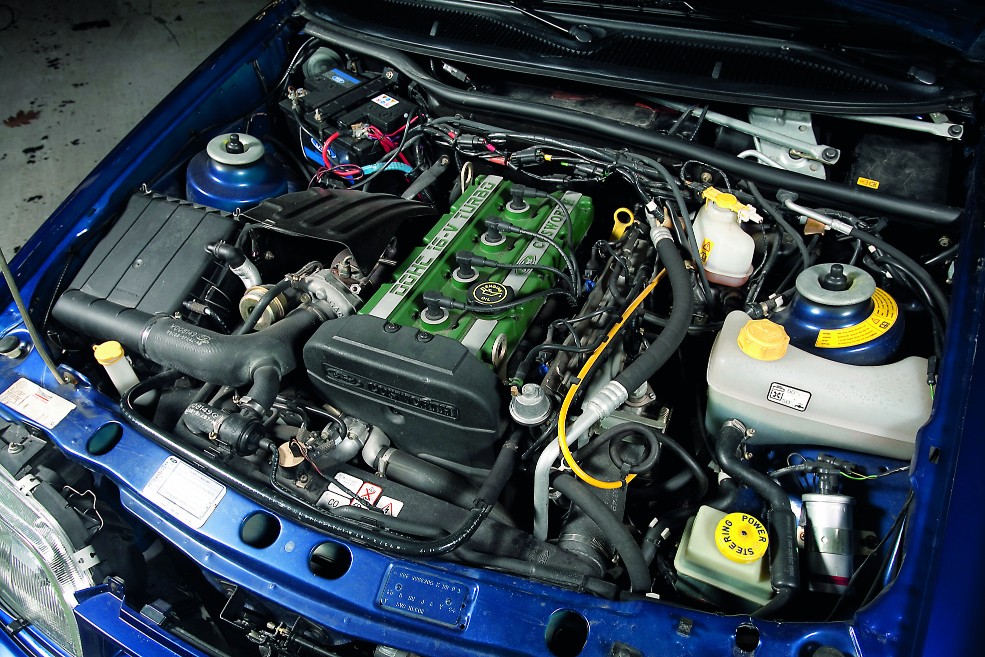 The original YBB found in three-door Cosworths is the weakest of the YB engine series, with the 4×4’s the strongest, although all can suffer from head gasket failure. A telltale that it’s leaking, usually before clouds of white smoke and emulsified oil, is coolant running down the rear of the engine block on the driver’s side. Smoke under boost is an indication of a worn turbocharger, but if it’s there all the time then it’s a sign of advanced engine wear. Misfiring is often a result of the wrong grade of spark plugs or a faulty sensor in the distributor. On any potential Cosworth purchase it’s essential to have an auto electrician check that the fuel pump wiring is delivering the full amount of volts, as it degrades over time and can lead to the Cosworth running dangerously lean.

Two-wheel drive models run the T5 gearbox, which is prone to third gear failing. A difficult shift between third and fourth is a sign of worn synchro rings, but don’t be put off by a notchy shift and if it baulks when selecting reverse as these are traits of the T5. The 2wd diff is durable and the standard clutch is only on its limit at 300 bhp. The 4×4’s MT75 gearbox commonly suffers from failing synchromesh, while other issues are slippage of the transfer box, which is evident by a noise between first and second gears, and a lack of drive to the front wheels due to a worn viscous coupling. A heavy, albeit functional, clutch is often caused by the heat from the exhaust melting the clutch cable covering and allowing moisture in to hinder its operation.

Original Ford suspension is impossible to source and if aged NOS parts do surface, it’s questionable about putting them on a 150 mph car. There are plenty of aftermarket alternatives for all versions, although enthusiasts of the original Cosworth favour Koni items and repainting them to match the original Ford colour. Tired springs and dampers are easily highlighted through a poor ride. The three-door is renowned for its rear end to be a little loose, but any Cosworth that is overly tail happy is likely to require new bushes. If the steering’s vague then expect the common problem of worn TCA bushes.

Front discs are easily warped on all versions, with a judder under braking and a vibration through the steering wheel being common symptoms. Callipers, particularly on the rear, can get sticky on seldom-used examples. The 4×4 is also known to be hard on front pads, while OE-spec flexihoses and the brake pressure proportioning valve by the rear passenger wheel can be hard to source. ABS is generally reliable but can be costly to rectify. Any aftermarket components need to be of a reputable brand if they are to properly slow the 150 mph fast Ford. 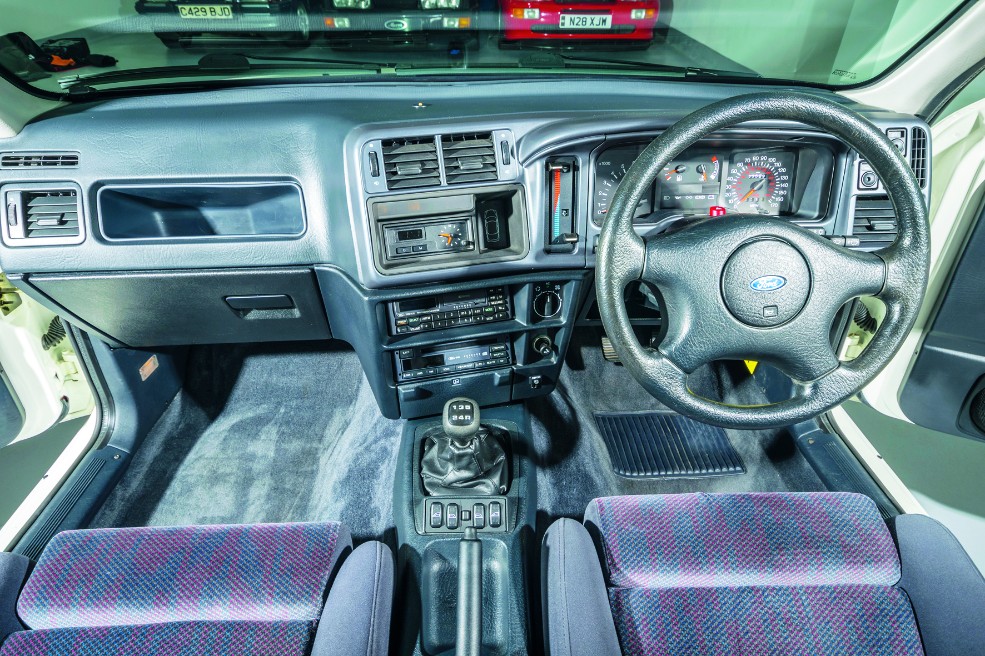 Recaro seats are reasonably durable, although bolster wear and collapsed foam is common. Whether they’re cloth or the 4×4’s optional leather, be aware that decent second-hand replacements are expensive and scarce. Dashboards are prone to cracking and the original Cosworth’s differs from that of other Sierras. If a replacement is the genuine article it will have a part number that starts with ‘86’ and a price tag of four figures… The three-door’s parcel shelf is also unique to the three-door Cosworth as it doesn’t fold in the middle. Headlinings can sag, particularly at the rear in the case of the Sapphire, and the doorcards’ covering is notorious for lifting and bubbling.

Few cars have increased in value as quickly as classic Fords and the Sierra RS Cosworth is one of the blue oval models that has experienced the biggest surge in asking prices, with more than one example touching six figures at auction. A roadworthy three-door will cost at least £25,000, with excellent examples commanding double. The 2wd Sapphire is the most affordable, starting at circa £13-£15,000 for MoT’d cars and rising to £25,000+ for a very good car. The 4×4 generally adds £5000-£7000 on top of 2wd Sapphire values. 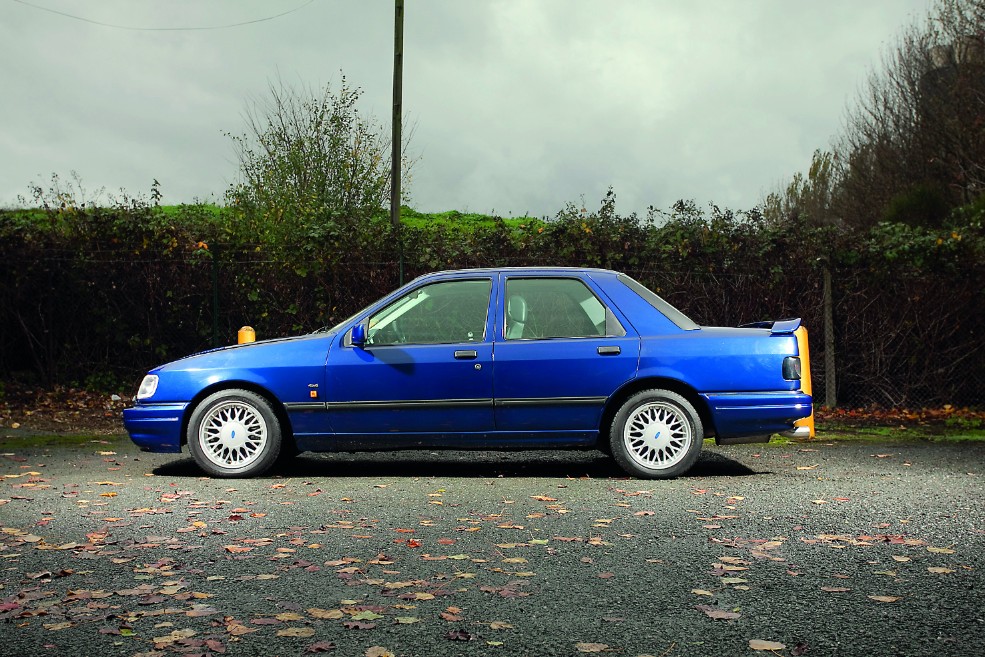