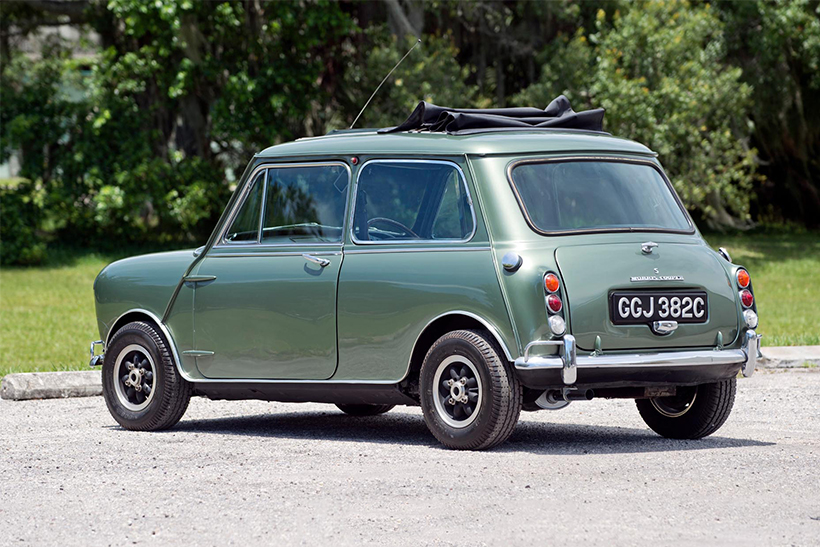 A coachbuilt 1965 Mini Cooper S once owned Paul McCartney has sold for an astonishing $235,500 (around £183,500) at Worldwide Auctioneers’ Auburn Auction in Illinois.

Hammered at £215,000 plus 10 per cent commission, it’s thought to be a world record price for a classic Mini and the highest we know of at auction. What’s more, we understand the iconic Radford conversion has been bought by a UK buyer and will be shipped back to Britain after spending the majority of its life in the United States.

Back at the height of their fame in the ’60s, all four members of The Beatles had a coachbuilt Mini – three by modified by Radford and one by Hooper. Paul was the third member of the Fab Four to have his luxury Mini ordered, but the first to have it registered. GGJ 382C got the full Radford DeVille treatment included a Sager Green paintjob, driving lamps mounted in the Benelite grille, a Webasto sunroof, Aston Martin taillights, electric windows, a custom wooden dash with extra gauges, a central armrest and leather upholstery. Under the bonnet, the 1275 Cooper S motor provided ample grunt despite all the extra accessories.

Paul used the Mini frequently during his ownership, and was often photographed behind the wheel, but was exported to the US after The Beatles split to pursue their solo careers. It was sympathetically restored by Florida-based enthusiast Brion Michael Fisher in 2001, before being acquired by the current vendor.

The car is still largely true to its original spec, with the exception of a different steering wheel and Rose Petal alloys rather than the Cosmics it had fitted in the ‘60s. It’s also reckoned the car has a 1967 bodyshell rather than its original 1965 one, though it’s thought this was replaced while the car was still under Paul’s ownership due to damage sustained when it was allegedly crashed by student Mohammed Hadjij.

The fee paid for the Mini considerably trumps the £102,500 Christian and Geri Horner shelled out last year for the Hooper-built hatchback Mini once owner by McCartney’s bandmate, Ringo Starr. Could the Horner household also be the destination for Macca’s Mini? Watch this space…