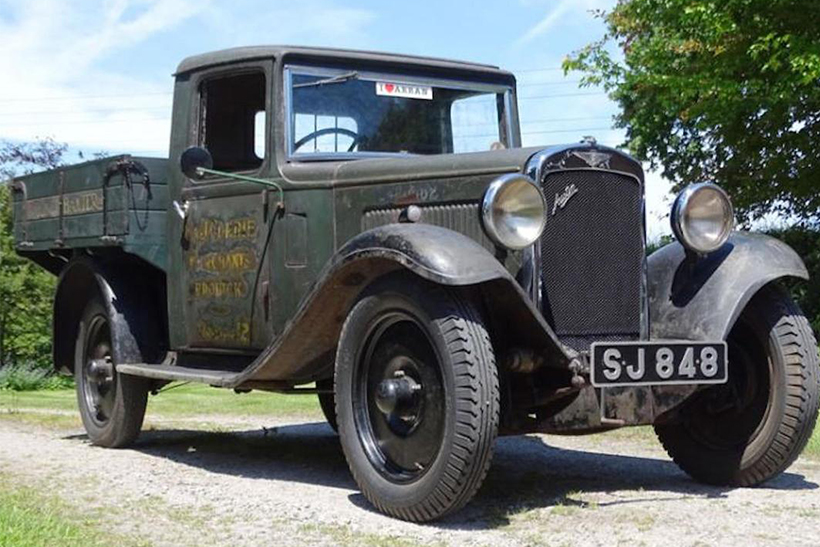 A lovely 83-year-old truck that first saw service on the Isle of Arran in 1935 is being sold by H&H Classicsat their next sale at IWM Duxford in Cambridgeshire on October 17th.

The truck was purchased new by Mary and Janet Currie, whose shop was situated in Brodick on Arran. They used it to deliver dry goods around the island, and ‘M & J Currie, Merchants, Brodick, Telephone 12’ is still emblazoned on the driver’s door. Subsequent owners have also left their liveries on this remarkable commercial vehicle, including the War Department which purchased it during 1939 for service in Scotland with the census number L4411082 (still visible on the nearside bonnet).

After the war it was purchased at auction by Moir & Baxter, who were Austin Agents in Edinburgh (their logo appears on the pick-up sides and passenger door). lt was used in the garage business until 1958, when Mr Moir put it away in a shed. Thirty years later the vendor found it abandoned on a farm on the east coast of Scotland with 35,000 miles on the clock.

The truck has unique and delightfully original bodywork and paintwork, and has a completely reconditioned engine with approximately 2000 miles covered since the work was carried out. It boasts a new clutch, recent radiator matrix and exhaust, plus it had been re-wired and had new rear lamps and flashers fitted. The ash on the rear body frame has been replaced too, and all mechanical items have been overhauled and reconditioned during the current ownership. It is said to be a lovely drive, and is used regularly. All in all the estimate of £14,000-£18,000 looks extremely cheap to us.

Roger Nowell of H&H Classics, says: ‘This old soldier is really charming. It has survived hard work, war service, 30 years of silence in a barn and then abandonment. It has come through it all and now deserves an owner who will continue to lavish love and care on it. Proving that owning a classic does not have to run to millions, the new owner of this truck will have a lot of fun.’

Full auction details can be found at H&H