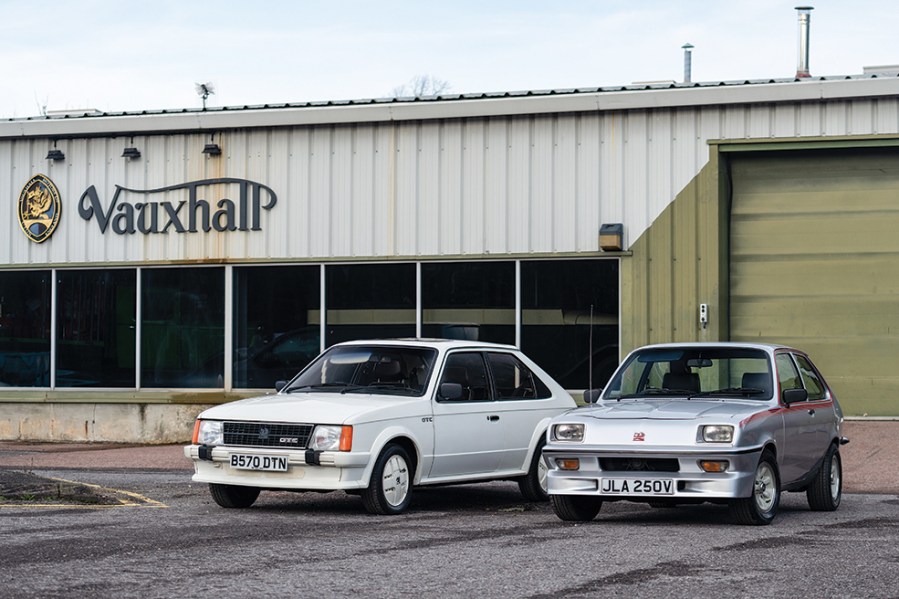 In hindsight it’s easy to have seen the hot hatchback revolution coming. Cars were becoming more sophisticated, engines were more efficient, and packaging problems were being solved by clever design; all of which seemed to home in on the hatchback being the be-all and end-all of essential motoring. Throwing sports car into the mix seems an obvious final element for the complete car. But the reality was more tentative and experimental than this. In fact, one of the earliest cars to be able to claim hot hatch status only saw the road by begrudging necessity.

The Vauxhall Chevette HS was a homologation special, wasn’t really marketed with purpose and therefore wasn’t ever properly acknowledged. There was appeal in this type of car, though, and the rise of Volkswagen’s Golf GTI had everyone rushing for something to offer too. Vauxhall took five years to get its Astra Mk1 to fully respond with a GTE model, by which time the Astra Mk2 was just around the corner. So, what we have here are two stunted starts to the hot hatch genre, but as you’ll see, neither is as slow in practice.

It was always clear that the little Vauxhall Chevette could take more power than its standard 1,256cc four-cylinder could deliver. Not only had it captured a large part of the burgeoning hatchback market – it was the UK’s best seller between 1975 and 1978 – but underneath its practical packaging it also had a dynamic edge over many of its competitors. The potential of the Chevette was eventually realised by Bill Blyenstein, a man who had raced and prepared hot Vauxhalls since the early 1960s. In 1975, fresh from working on the Big and Baby Bertha projects for Dealer Team Vauxhall, he turned his attention to the new Chevette.

First, it was the Blydenstein Chevette 1500, a standard 1,256cc car bored and stroked up to 1,511cc, with power going up 50 per cent up to 77bhp. Hot on its heels was the DTV developed car, the Chevette HS, a more serious car designed for rallying. A 2.3-litre engine from the Vauxhall Victor was wedged in, then treated to a sophisticated double-overhead camshaft and 16-valve head which, when fed by twin Dellorto carburettors, developed a staggering 240bhp. This was put through a Getrag dog-leg five-speed gearbox to a rear axle borrowed from the Opel Kadett GTE. It was finished off with fibreglass spoilers front and rear, and wide alloy wheels taking bigger rubber.

On the rally stages it proved to be rather formidable, especially with stars like Pentti Airikkala, Russell Brookes and Tony Pond behind the wheel. An updated HSR version, with even more fibreglass panels and redesigned rear suspension, came later but was short lived and was ultimately replaced by the Opel Manta when, in 1981, the Vauxhall and Opel dealer teams merged into one. Only 50 HSRs were homologated, most being converted from the existing homologation run of Chevette HS models of which there were 400. The cars for the road were, however, rather less potent than the rally-going versions. 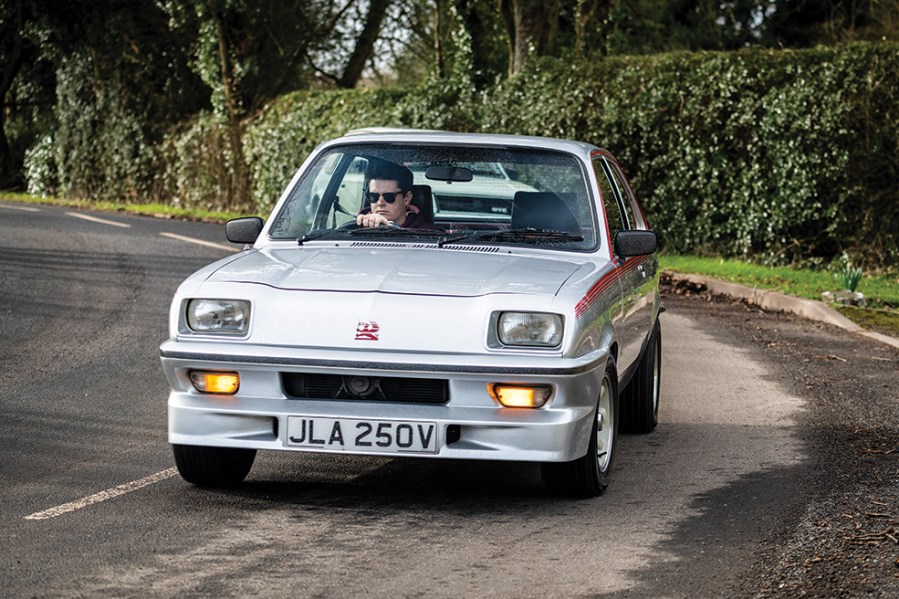 But while the car you would’ve bought from the dealer, and represented here, may have had its 2.3-litre big four somewhat strangled by two lazy Stromburg carburettors and a lowly compression ratio of 8.2:1, it’s actually still faster than the fuel-injected Astra GTE we have it lined up against. In a straight line, whether from a standstill or in the mid-ranges, the Chevette has a decisive advantage against the Astra. Its 135bhp is never far from reach thanks to an absurdly short and close ratio gearbox, although stray too far above the national speed limit and you’ll feel bad for it. There’s still a sense that, even though it’ll pick up and rev with real vigour past 3,500rpm and up to 6,000rpm, the big engine up front is very much of the old school. Its slanted big pistons are felt at idle and give the little Chevette the feel of a mini muscle car, only with an aggressive cam – in this case two of them.

It probably handles a whole lot better than most muscle cars though and on massive 205/60mm tyres it holds on too. Rocketing along little lanes between 50mph and 70mph, the HS is in its element. The suspension is firm and steering heavy, but the car always feels like it’s on your side even when it’s becoming a little squirmy under power mid-bumpy-corner. It’s actually far less dangerous than you’d expect. It’s simply a joy to hurtle along, pointing its little snub nose round corners and having its raucous engine charge down straights.

Part of the sporting package for the HS is a comprehensive set of dials, including oil pressure and voltage meter down on a centre console, a short shifter for the gearbox, and a leather wrapped steering wheel. But sit down with the snazzy red carpets and tartan seats, and you’ll quickly find yourself in an ergonomic nightmare. The steering wheel is angled out of the driver’s window, the wiper stalk approaches your left knee in the off position, and the location of its switches need a good memory. The pedals are well sited though and the driving position is generally pretty good.

The Chevette HS is for driving on a good twisty road, and there it’s a properly exciting thing. Just try to ignore the woeful fuel consumption (although it’s difficult to with an 8.5 gallon tank). It’s also best to avoid stop/start traffic where the heavy controls and lumpy idle can get tedious, and we’d also avoid any long motorway runs, unless you like noise and petrol stops. But, such is the Chevette’s character that you tend to sense its discomfort in the wrong situations and forgive it, even when the carbs flood away from the traffic light grand prix. You just say sorry to it and promise it the right roads are coming soon.

The Astra, on the other hand, feels like it was designed to do the daily commute. Its fuel injected engine fires into life quietly and sets off without any fuss. The GTE is a little firm at low speeds but the rolling refinement is seriously impressive. There are faint echoes of the Chevette’s interior layout, in the cabin temperature sliders and dials but it’s mostly a quantum

leap ahead. The driver is treated to a more elegantly formed dashboard, proper centre stack, dials neatly integrated into the binnacle and indicator stalks that return to a horizontal position. The fact that these are from the bigger Cavalier model is telling, because the Astra isn’t just a refined car compared to the Chevette but it was against its main rivals. 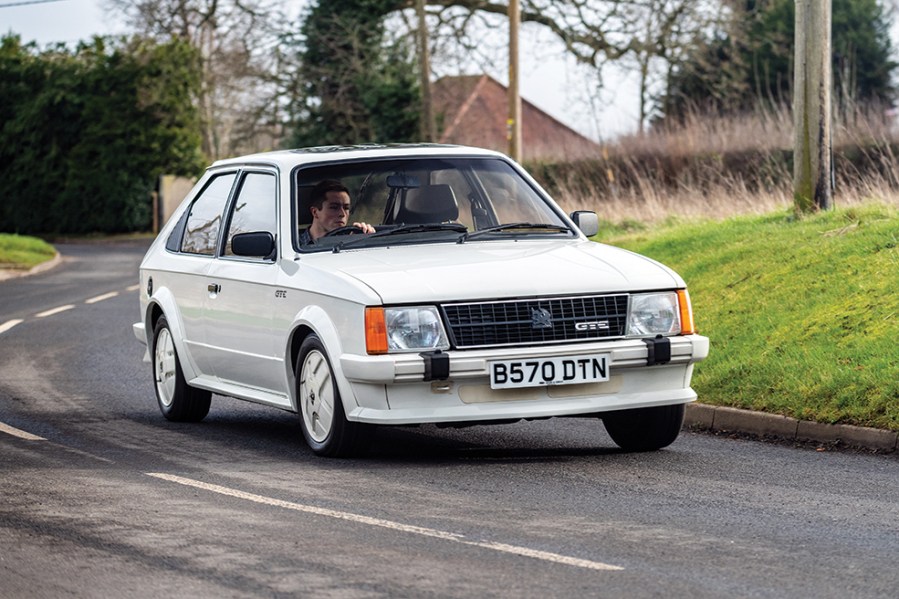 The Mk1 Astra was a departure from the rear-driven cars of old, like the Chevette, and was one of the first front-drive hatchbacks in its class. Its packaging was class-leading, and it featured sophisticated new engines with aluminium heads, and high levels of refinement. Strangely enough, the Chevette, which the Astra effectively replaced, continued on in the UK as a cheaper, more basic alternative. The GTE never overlapped with the Chevette HS though, arriving long after the Astra’s initial release. There had been a taste of a sporting Astra in 1979, but the Astra SR, with its 90bhp 1.6-litre engine, still wasn’t quite enough to test the chassis or, more importantly, challenge the new and increasingly popular hot hatches from Volkswagen and Ford. It was only in 1983 that there was a properly hot Astra. Taking the latest fuel injected 1.8-litre engine from the Cavalier SRi, the Astra GTE was born.

This means that once you’ve gotten out of the traffic and lean into the throttle, there’s 115bhp and an urgent, sporting character waiting to get out too. Despite breathing through only eight valves and a single overhead cam, the Astra revs much more freely than the Chevette and sometimes so smoothly that it disguises just how much pace you’re piling on. You can vary the throttle very accurately though, and the brakes are spot on too, although the long-throw gearbox and long ratio steering rack don’t really deliver on the hot hatch experience that you might hope for.

That said, it’ll deliver all the B-road performance that a Volkswagen Golf GTI or Ford Escort XR3i can, and despite falling short of the Chevette’s pace on paper, it’s just as fast in the real world. What is isn’t, perhaps, is quite as engaging.

What the Vauxhall Astra does have is the type of versatility that the Chevette always claimed to. The packaging is so much better that within a body only 5mm longer it offers far more practicality. Even after the Vauxhall Chevette’s 1980 facelift which extended rear legroom, the Astra offers an additional 4 inches, and lots more headroom too. The longer wheelbase, calmer steering and long gearing (70mph at 3,000rpm) also make it a viable prospect for longer journeys. You won’t mind spending lots of time in the Astra either, because its seats are superbly shaped for both support and comfort, and the whole interior is trimmed very nicely. From chrome strips on the doors to rich fabric on the seats, it feels like there’s more than just the engine from the Cavalier in the Astra GTE.