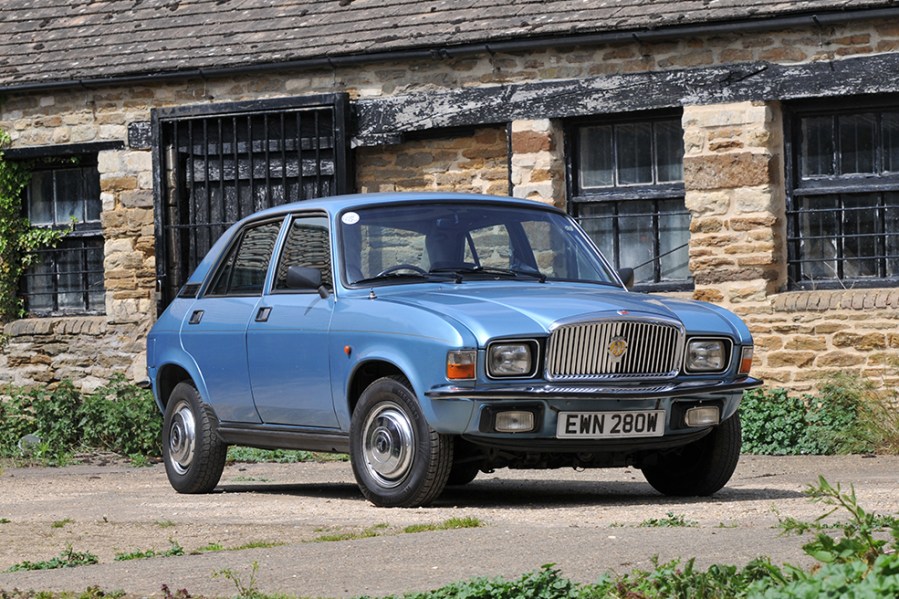 Turning the Allegro into a mini Rolls-Royce seemed a stretch too far even in the 70s, so how does the Vanden Plas 1750 stack up today?

It’s unlikely that when designing their current range Toyota benchmarked it against a 40-year old car from a long-defunct manufacturer which even when new was often ridiculed. But bouncing along a cratered farm track in our Vanden Plas 1750, I was struck by the fact that BL’s upmarket small car handled the potholes far better than the current state of the art from one of the world’s biggest car makers. My company-issue Toyota hybrid estate had bounced around dramatically even at walking pace, but the Allegro – sorry, Vanden Plas – stayed pretty level with its long wheel travel throwing the occupants around far less violently.

The story of the Allegro has been well told before, so I’ll be brief: its place in the BL story is essentially that of a successor to the surprisingly successful ‘ADO16’ BMC 1100/1300 which had been a rare hit for BL, regularly occupying the top of the domestic sales charts. Initial thoughts had centred around a simple reskinning of the older car, but in one of those fits of misplaced optimism which so often feature in BL corporate history, the decision was taken to go with an all-new design.

Initial sketches showed a kind of shrunken Princess, the wedgy styling translating wonderfully to a smaller car but then the BL compromises started creeping in. The car was originally to use the A-Series engine but it was then decreed that the new E-Series engine would be used. The overhead-cam engine/gearbox assembly was significantly taller than the A-Series and so the bonnet line had to be raised, while the new heater assembly was also a bulky unit. Crash regulations were now stricter and engineers were also keen to give the Allegro class-leading torsional rigidity by inflating the curves of the side panels. The whole car was then given added height to retain the proportions but by then the damage was done and the dumpy look was there to stay. Ironically, interviewed in 1973 Harry Webster claimed the Allegro to boast class-leading torsional rigidity which was rather lost on owners who found the rear window popped out when a trolley jack was used in the wrong location.

Naturally, Hydragas was employed for the suspension, revised to offer a less bouncy ride than the ADO16 and the result was a spacious, comfortable small family car which on paper suffered significantly in market appeal only for its lack of a hatchback. The British offshoot of coachbuilder Vanden Plas had been acquired by Austin in 1946 and as a BL subsidiary it had traditionally been responsible for large cars and limousines, but when boss Roland Fox produced a design exercise based on the BMC 1100 for display at the 1963 Motor Show, the positive reception was a surprise. Named Princess 1100, the car was put into production and proved to be a strong seller, chalking up a total of over 40,000 including the later 1300 model.

Clearly, that meant a handy number of buyers would be looking to replace their compact Vanden Plas cars with the newer model, but there was a very obvious problem. Pininfarina’s ADO16 had included a prominent front-end snout which lent itself well to being given a regal grille as part of the Vanden Plas treatment but the Allegro’s shape didn’t offer any such opportunity. 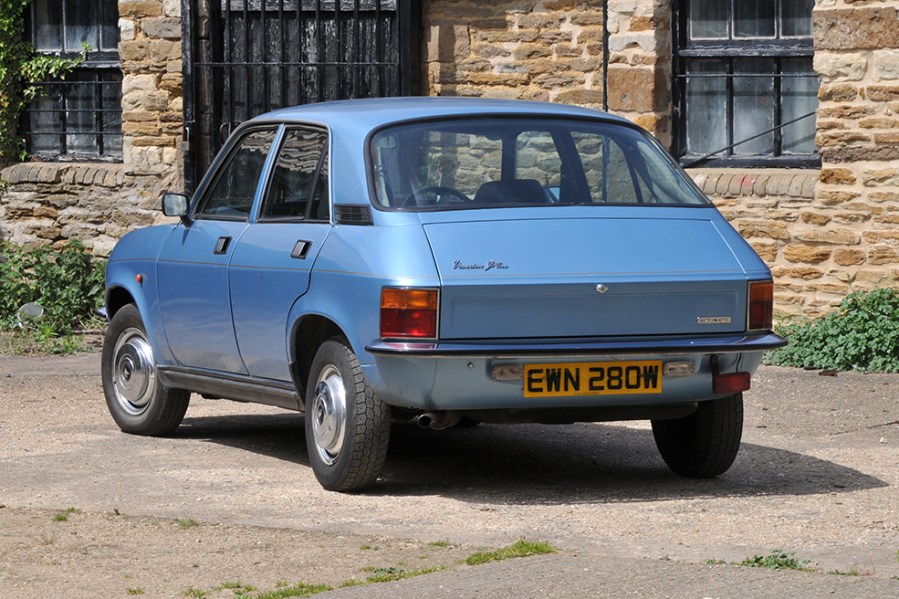 A second stumbling block was that cost constraints meant in the transition from Allegro to Vanden Plas the stylists were allowed to change just a single panel. Naturally, the bonnet pressing was the one chosen, gaining a raised centre section which permitted an upright front grille to be added. Said to have been inspired by the nose of the top-end Vanden Plas-badged Daimler, the grille was a streamlined interpretation of that on the older car and was inclined forwards slightly at the top end to give the Allegro a new-found thrust. Similarly copying the Daimler were a pair of foglights positioned under the bumper, with Vanden Plas-branded hubcaps and a stick-on coachline.

Inside, it was a different matter, with the luxury interior being where the Vanden Plas craftsmen were free to give their skills free rein. The seats – or at least, the seating faces – were trimmed with the same Connolly hides used in the big VdP limousine and the Daimler, along with fold-down front and rear armrests. The rest of the seats were covered in Ambla – vinyl, in other words – but incredibly, the two materials seem to have stood the test of time and retain their colour match.

The dashboard may not have given quite the same ‘shrunken Silver Shadow’ effect as the ADO16, but a covering of walnut veneer gave the appropriate lift, paired with veneered door cappings. Showing unusual attention to hidden details for a product of the BL years, the headliner was also upgraded to a brushed nylon cloth, while the Evian carpets offer a deep pile and are apparently backed by ‘needle loom’ felt. Other details included a reading light for each rear passenger, a fully carpeted boot, storage pockets in doors and seatbacks and the crowning glory: those fold-out picnic tables in the seatbacks.

In what must have been a constant source of irritation to BL’s production accountants, production of the luxury Allegros was a complicated affair involving untrimmed Allegros being driven to Vanden Plas’s Kingsbury factory in West London with the drivers sitting on ‘slave’ seats. This meant that each one had already covered 100 miles before it reached its owner, but on the plus side, it did mean that any mechanical faults – and there were doubtless plenty – would become obvious before delivery.

On arrival at Kingsbury, the cars were trimmed and finished, together with any rectification work which was needed. The Vanden Plas ADO16 models had been painted on the BL lines to a finish specified by VdP, but the Allegro didn’t get that special treatment; instead, the cars were meticulously buffed up, with no less than 12 inspectors employed on the Kingsbury line. That’s probably higher than the number employed on the main Longbridge lines and explains why the Allegro-based Vanden Plas cars were generally better prepared than the lesser models. It also explains why each car too two full days to evolve from Allegro to Vanden Plas. 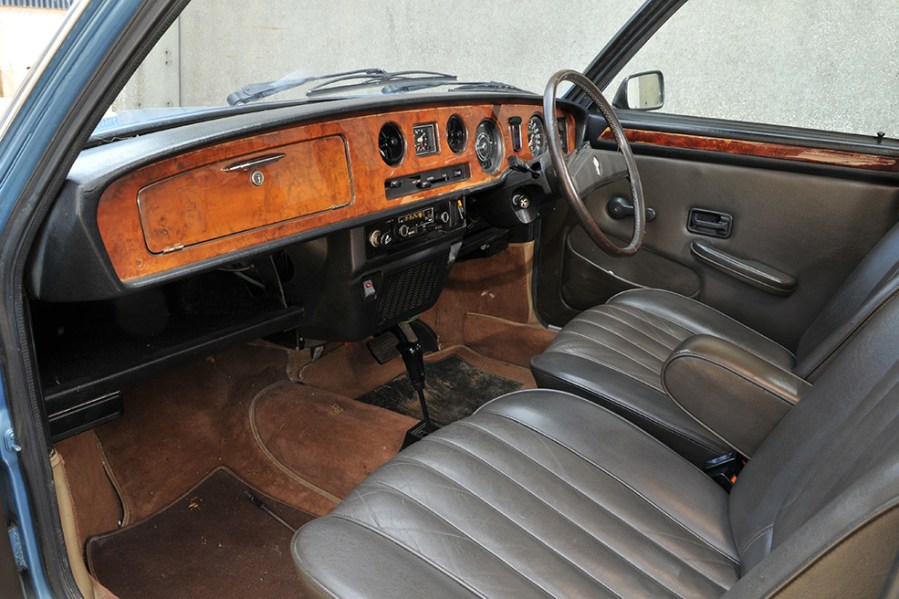 Sadly, it also explains why in 1979 the Kingsbury works was deemed to be unviable and was earmarked for closure. Production of the DS420 limousine was moved to Jaguar, while the Vanden Plas 1500 and 1750 were finished on MG’s production line at Abingdon, where they took the place of Midget production which was by then winding down. The wood, the leather and the picnic tables were all still present, but inevitably the cars didn’t get quite the level of attention to detail they’d previously enjoyed. As we know, the Abingdon plant would be closed in October 1980, taking the Vanden Plas with it and there would be no big-grilled version of the Series 3 Allegro.

That makes our recently acquired project car you see here one of the very last, registered in August 1980 by which time production was already slowing down as Abingdon ground to a halt. Powered by the 1750cc E-Series, it was the absolute pinnacle of the Allegro range in its heyday and like so many of the Vanden Plas models it’s clearly been cherished – so much so in fact that it’s been restored and painted at least once already.

Being old enough to have had schoolfriends who ran them as their first cars, I’m pretty familiar with the Allegro but I haven’t driven one for a couple of years. In fact, I’ve sampled more examples of the ADO16-based Vanden Plas and always found them to be utterly charming, especially in 1300 automatic guise so was interested to see how the Allegro compares.

The first impression is that the newer car feels much larger than its predecessor, an impression created mainly by its greater height and bulbous body sides. Certainly on the inside the Allegro retains that great space efficiency the front-drive BMC/BL cars were known for, with the big glass area contributing to the effect.

Being a more modern design, the 1750 doesn’t feel somehow quite as hand-crafted as the older car, most likely because so many generic BL plastic parts are still plain to see – items which would have been tricky if not prohibitively costly to camouflage. That aside though, it seems really quite different from the regular Allegro, and smells it too – even after 40 years, this VdP has an aroma more Rolls-Royce than generic BL hot plastic. 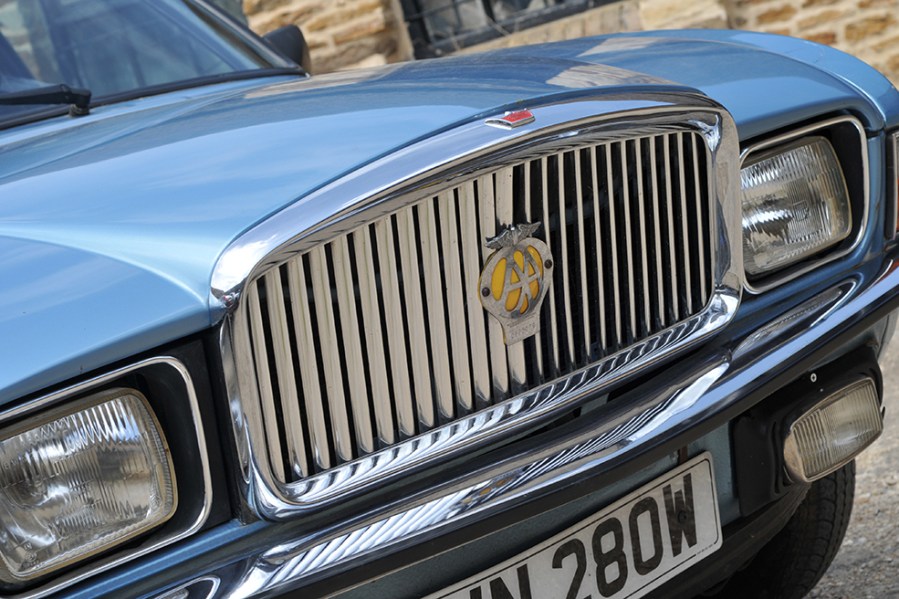 You’ll also notice that our 1750 is also an automatic – this being the only option with the 1750 engine – which adds an intriguing twist, since the self-shifter Allegros shared the same four-speed AP gearbox with the Mini. An idea in some ways ahead of its time, the four-speeder allowed the automatic Mini to become the perfect city car, albeit with almost comically frequent changes. In the bigger-engined Allegro it’s lass frantic and somehow suits the stately nature of the beast.

One thing it’s not is quick. With the twin-SU engine the Allegro 1750HL was good for 89bhp and given that it tips the scales at just under the tonne you’d expect spritely performance, but the Vanden Plas is no dragster: 60mph is clocked up in just over 13 seconds and it’s all in at 94mph.

Straight-line speed isn’t what people bought the Vanden Plas for though and in gentle driving the car is in its element, the Hydragas masking the potholes remarkably well and the extra sound deadening keeping noise levels usefully lower. As for the rest of the driving experience, well it’s largely Allegro of course – and that’s really not as bad as urban myth and rumour would have you believe.

The designed-by-committee Allegro has its flaws but in truth a contemporary Escort has an equal number and for those drivers who wanted the security of front-wheel drive and the comfort of the fluid suspension the Allegro was the better choice. And yes, there was the thorny issue of BL build quality but let’s not forget that for every ‘All Aggro’ comment back in the day there were probably an equal number of ‘Dagenham Dustbin’ jibes.

As the world’s car industry today clutches at the premium sector for survival, the upmarket Allegro stands out as an idea ahead of its time. Ironically, the market niche of a premium-feeling small car is now one which is firmly occupied by BMW’s MINI brand but it’s heartening to know that the oft-derided Allegro played a part in its history.