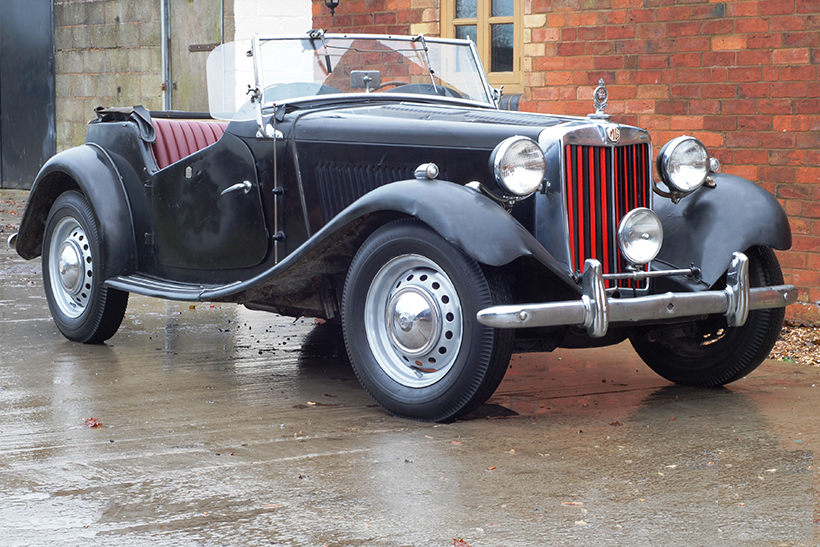 Last year has seen me spend a fair bit of time in and around pre-war cars and I must admit that although they didn’t used to be my thing, I’m becoming increasingly attracted by&nbsp;the idea of something properly old.

The trouble is though, really old cars are just that – really old – and they can be much less practical than something just a few years newer. Classics from the ’Fifties (for example) are by and large able to keep up with modern traffic and have luxuries like a heater and a synchromesh gearbox, which makes everyday life so much easier.

Here though is something that neatly combines the two: MG’s T-series cars have all the separate-wing style of cars from the late ’Thrities, yet in TD form are as easy to drive as anything else from the early ’Fifties.

The T-series was first produced in&nbsp;1936 as the TA Midget and evolved into the TB in 1939 before production was halted for rather obvious reasons. When peace returned, the MG company didn’t have the resources to develop an all-new model and so the T-series returned to production in mildly modified form as the TC.

For 1950, the TC became the TD with MG’s aim being to create a car that would appeal to the affluent US export market. The same OHV 1205cc XPAG engine was used, but the chassis was redesigned to carry the independent rear suspension and rack-and-pinion steering borrowed from MG’s Y-Type saloon. The new chassis was noticeably wider in the cockpit area and the rails now went above the rear axle, allowing for a lower ride height and more modern 15-inch wheels. The bodywork was restyled for a more streamlined appeal and the car was made in both left- and right-hand drive for the first time.

The XPAG engine was now running higher compression to suit gradually improving petrol and boasted 57bhp, which gave it a top speed of 77mph. Despite the car being produced for only three years, some 30,000 TDs left the Abingdon works, of which the majority found their way to the USA where the car gained a massive following as the US makers produced nothing comparable at the time. In comparison, its successor, the TF, managed to clock up less than 10,000 before the T-series ended in 1955 with the introduction of the MGA.

This example has just found its way back home after spending the last six decades in Wisconsin and seems really pretty sound. It’s obviously been loved by its American owners, as witnessed by the Union Jack radiator mascot, and although it’s far from being a concours contender it’s certainly all present and correct. The only issue we could find was that the driver’s door didn’t seem to be aligned correctly, making it difficult to engage the latch, but elsewhere it seemed pretty solid.

ON THE ROAD
When we visited, the TD was just about to be fired up for the first time after landing on British soil. With a new fuel pump fitted, the stale fuel pumped out of the lines and a gallon of fresh unleaded in the tank, the TD fired on the first pull of the starter and we all remarked just how sweet it sounded while running.

There was no reason not to take it for a spin so we had the honour of being the first to drive the car on British soil, as we took it on a rather tentative spin round the yard. A strange noise from the propshaft area proved to be nothing more worrying than the curiously duct-taped fibreglass cover over the tunnel and with that out of the way it drove, steered and stopped as it should.

VERDICT
The TD is an easy car to drive, with a conventional pedal lay-out and a familiar gearshift pattern, and really, despite its age, it’s no more intimidating than an MGB but with bags more character.

Parts supply for these cars is superb and – except for the wood-framed body – they’re very easy to work on, making a car like this an easy rolling restoration for the keen DIY-er. Certainly it could be made presentble without spending a fortune and should even have a British MoT by the time you read this – although it is of course tax and MoT exempt.