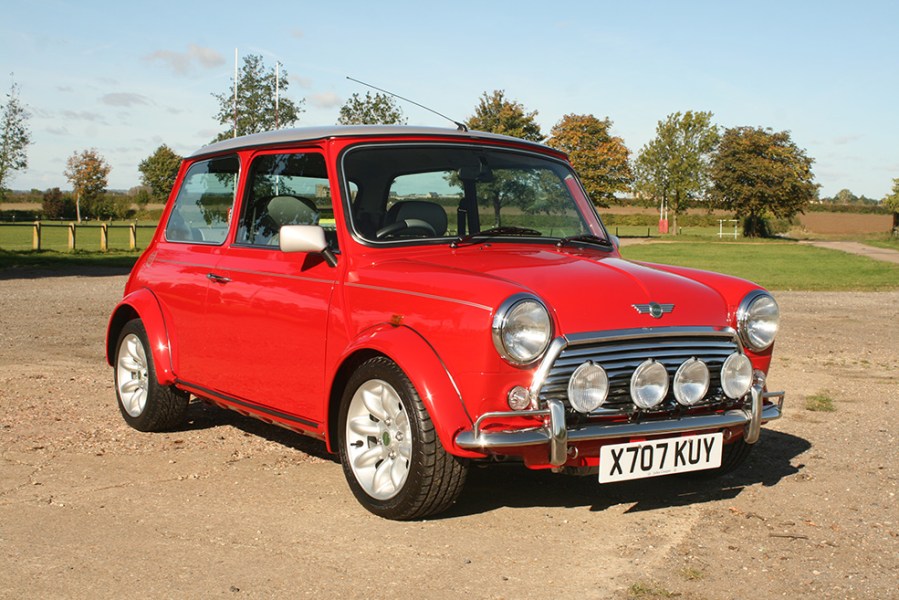 Instantly recognised the world over, the Mini is without doubt one of the most iconic cars to be designed and built in the UK. Introduced in 1959, this very small economical car was powered by a transverse engine with FWD and utilising rubber cone suspension, which all helped to maximise space in order to accommodate four people. The genius behind the Mini was Sir Alec Issigonis and his team, who worked from a brief laid down by BMC Chairman Leonard Lord, which ultimately would see BMC being awarded the prestigious Dewar Trophy in 1959. The design’s strict guidelines maximised excellent use of minimum space and to save money.

BMCs existing engine A-Series four-cylinder engine was used. Successful racer John Cooper then entered the fray in what was to become an extremely lucrative and long lived partnership. The Mini Cooper arrived in 1961 and went on to become a legend, especially in competition trim, tackling and finishing the Monte Carlo Rally with aplomb. There have been a great many special edition Minis over the years and the very last of the breed was to be the Rover Mini Cooper Sport 500. It still retained the classic Mini lines, but exuded plenty of brawn, with wide wheels and arches, a tuned 1275cc engine, refined leather interior and only available in four colours, Solar Red, Tahiti Blue, British Racing Green and Anthracite. One way to identify a genuine 500 is a plaque mounted in the glove box compartment, with the legend, “This Mini is one of the last 500 built to the original Sir Alec Issigonis design.”

This Rover Mini Cooper Sport 500 isn’t exactly your run of the mill example. It’s probably one of the finest examples in existence and a multi-award winning concours car! It’s number 183 out of 500 genuine examples to be produced. The previous owner purchased the car in 2002 and in 2011 decided to go down the concours route. All the body panels are original, as is the gleaming Solar Red paintwork, other than some minor rectification at the front. Prior to detailing the engine, it was removed from the bay, which was subsequently repainted and the engine refitted. The roof is finished in Platinum Silver. Cleanliness is often described colloquially as “you could eat your dinner off it”. This is very true about this car, especially the underside, which is every bit as shiny as the top. The Mini had been Waxoyled early in its life, which had paid dividends, keeping corrosion at bay. This was completely removed and the underside was repainted in Solar Red and the subframes painted Silver to match the roof. The car was then completely re-Waxoyled in all the cavities, nooks and crannies.

The interior is very much as spotless as the exterior, featuring unmarked black and silver leather trimmed seats and aluminium door furniture. The interior is pretty much indistinguishable from new, with virtually no wear and tear. There’s a chunky black and leather trimmed steering wheel and leather coated dash rails, it’s as sumptuous as it gets! 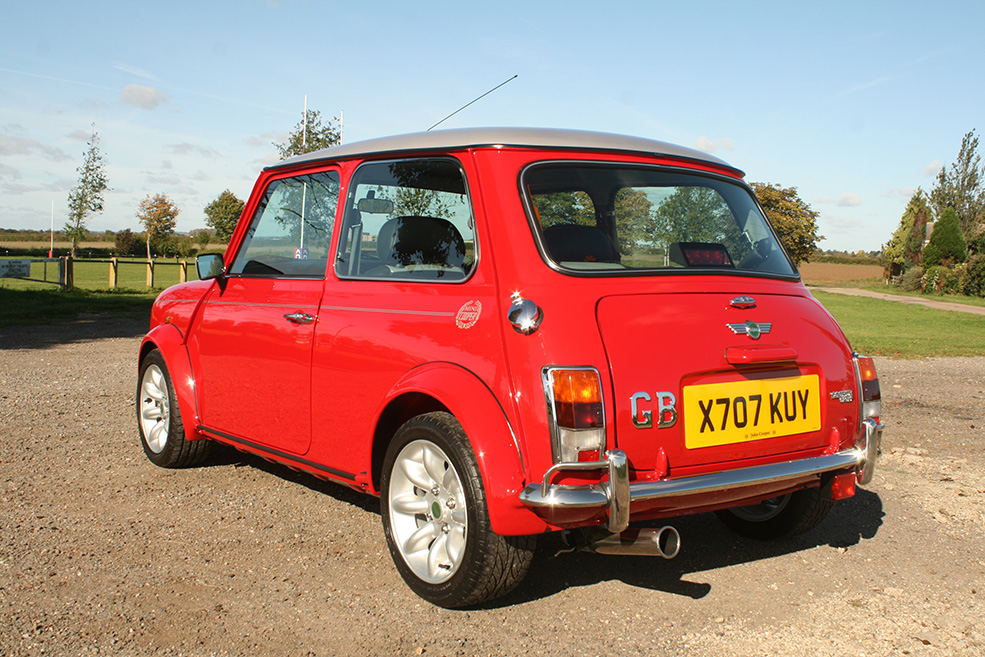 ON THE ROAD
While the basic driving position for the Mini is virtually unchanged through the generations, the last of the breed has certainly seen some refinements in most other departments. The amply padded leather trimmed seats proved very comfortable and the gear shift was silky smooth and a delight to use, though selecting reverse gear wasn’t as easy and required a really determined input. One thing that did strike us as being rather odd was that there was no oil pressure gauge? Merely an oil temperature gauge, which barely rose above the 50C mark, though vendor Blake assured us that on a long run, it does move upwards when the engine gets hotter. The 1275cc engine has been tuned featuring a Rob Walker Engineering Stage 3 cylinder head, a ported and polished inlet manifold, Swiftune roller rockers etc, and provides quite lively performance. You can certainly have great fun putting this car through its paces, it felt really sure footed and very eager. The suspension and handling is on the firm side and comprises of Spax 50th anniversary adjustable dampers, with a Mini Sport Adjustable Ride kit. 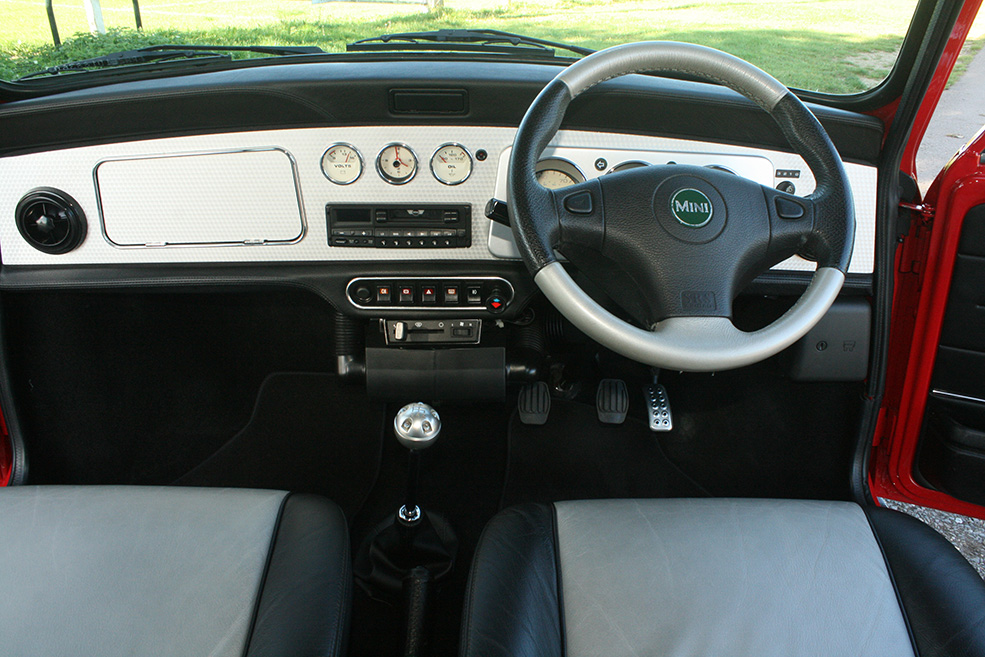 VERDICT
This Mini, the last of the line in genuine original Coopers, is magnificently presented in all aspects and the fact that it has been the recipient of many concours awards speaks for itself. Whatever used classic you purchase, something usually needs fixing or remedying, not with this one. It comes complete with service history, old MOTs, service bills, two sets of keys, low mileage, superb specification and that all important provenance of a 500 certificate. Oh and all the trophies it has won! If you love Minis and concours examples, here’s an absolute corker! 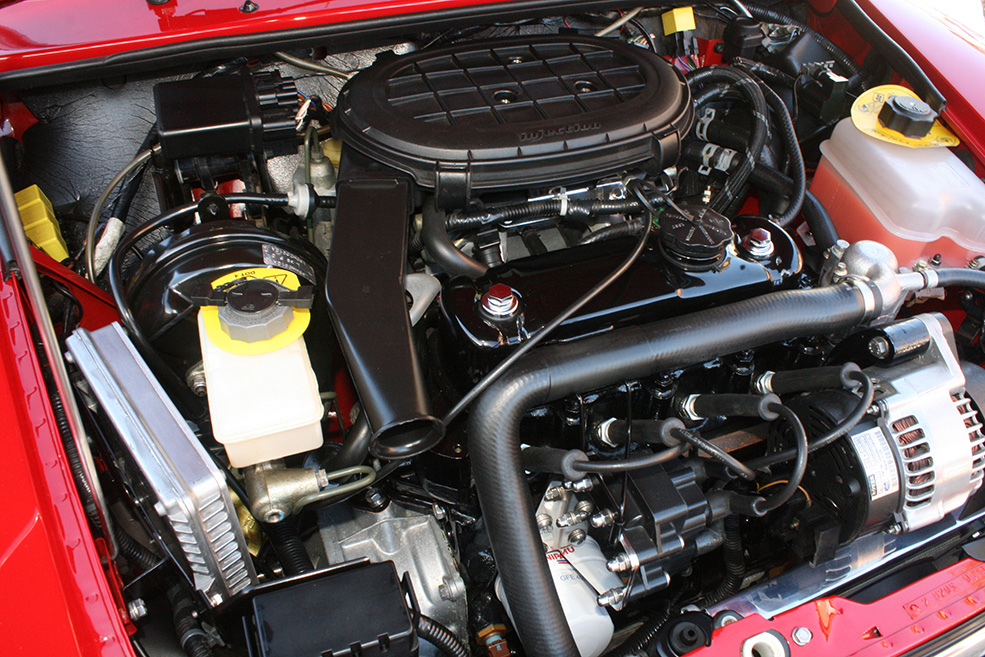