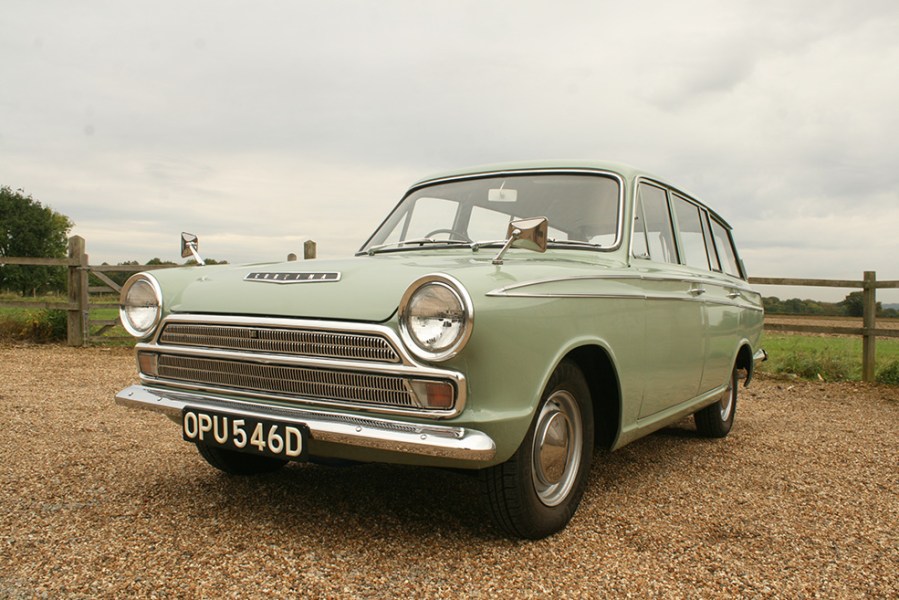 The Ford Cortina was to become a best seller in the UK for the Blue Oval stable. The Mk1, which adopted the project name of Archbishop, was introduced on 20th September 1962, several weeks before the London Motor Show in October at Earls Court. It was named after the popular Italian ski resort Cortina d’Ampezzo, where the Winter Olympics were held in 1956.

The boxy styled saloon offered plenty of room inside, was reasonably cheap and cheerful, with power coming from the already tried and tested 1198cc OHV Kent engine, as used in the Anglia. Underpinnings comprised of MacPherson struts at the front and leaf springs to the rear. One of the most notable aspects of the Mk1 Cortina was its most distinctive rear Y-shaped lamp cluster. A five-bearing 1498cc engine was introduced in 1963 – along with disc brakes at the front – plus an estate car, also available with mock wood panelling along the sides and tailgate. Production ceased in 1966 with the introduction of the MkII Cortina.

Our tried and tested Mk1 estate has had only two owners from new, the last for 33 years! It represents a sound, honest and original example in very good all round condition. Some previous sympathetic restorative work has included replacement of the rear wheel arches and the entire car has been repainted in the original colour of Spruce Green. This has included the engine bay and underneath the bonnet, which remains clean and tidy and the loading bay is squeaky clean and shiny. The bodywork is in excellent order, hardly any blemishes at all, while the doors shut perfectly without the need to slam them. The bright work is all very presentable, although the Cortina legend on the bonnet is slightly faded and while the steel wheels have been repainted at sometime, for that crisp perfect new look, a quick sand down and repaint would pay dividends.

Inside the car, it’s a real case of real time warp and other than the front seats having been retrimmed in green vinyl, everything else is original and very well preserved, especially the headlining, which looks as good as the day it was fitted! You don’t get carpets with the Mk1 Deluxe, but a black rubber covering, which again is extremely well preserved. There are a few chips and a little light patination to the dashboard air vents, but nothing of any great concern, just natural use and ageing. 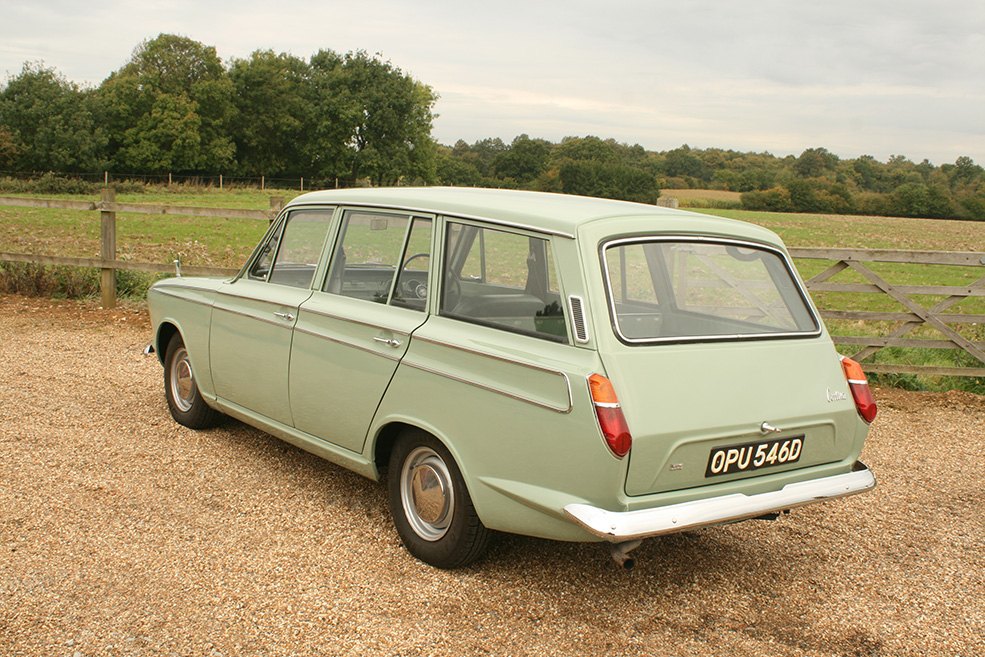 ON THE ROAD
After only half a mile or so behind the wheel, you feel very much at home in this Cortina Mk1. The driving position is most agreeable and dashboard ergonomics simple but effective, with instrumentation clear to see. Driving the Mk1 is so user friendly, the long gearstick is mounted quite forward of the transmission tunnel and has a positive slightly clunky mechanical action. Changing gear is such a cinch, the throw is so light and precise, that you can virtually change gear, merely using nothing much more than your finger tips, it’s that easy! The recirculating ball steering is also pleasantly light. Power from the 1498cc engine is adequate enough to keep up with modern day traffic patterns and this Mk1 cruised at 50mph with ease.

Okay, so performance isn’t exactly spritely, but perfectly acceptable in period. We tested the brakes and found they pulled the car up in a straight line without any fuss. All gauges worked efficiently. This estate maybe slightly utilitarian, but to coin a more modern phrase, it does everything it says on the tin! It’s all about providing comfortable accommodation for four adults, economically and has a very useful carrying capacity at the rearm with easy loading. 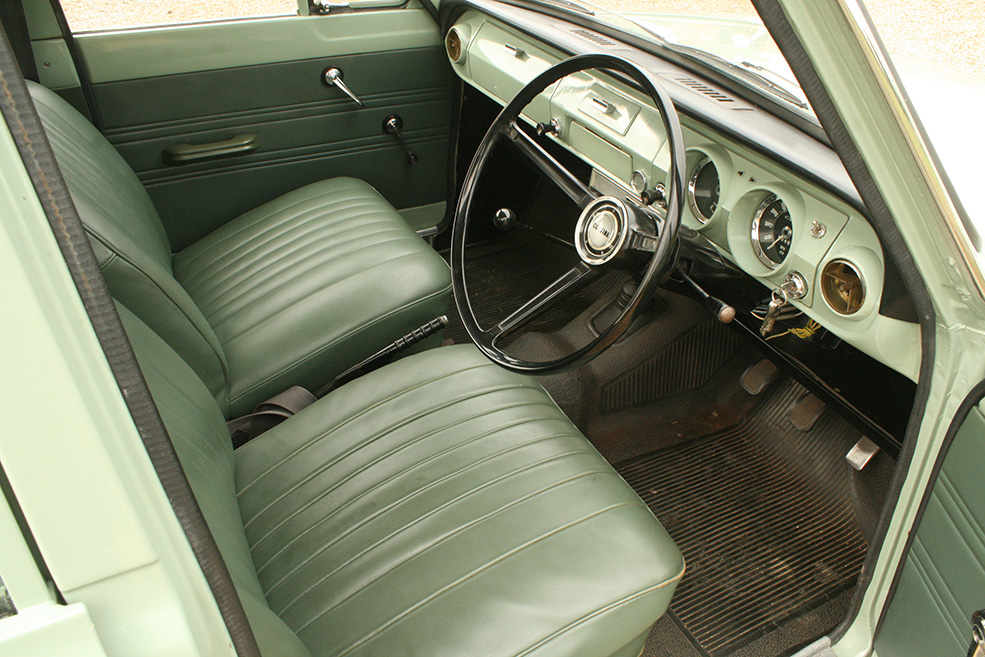 VERDICT
Two owner classics, in extremely original and fine condition, completely, unmodified (other than the engine alloy valve cover) or messed with, will always be most sought after and this Mk1 estate represents a delightful example of the marque. If you’re looking for an economical classic estate car, this Cortina would fit the bill very nicely. There are bags of interior space for the whole family, canine pets as well! Although clean and tidy, further light cosmetic detailing of the engine bay, would be a relatively easy and inexpensive task and very much compliment the repainted bay. There’s not really anything else that needs any attention, this car is all good to go. 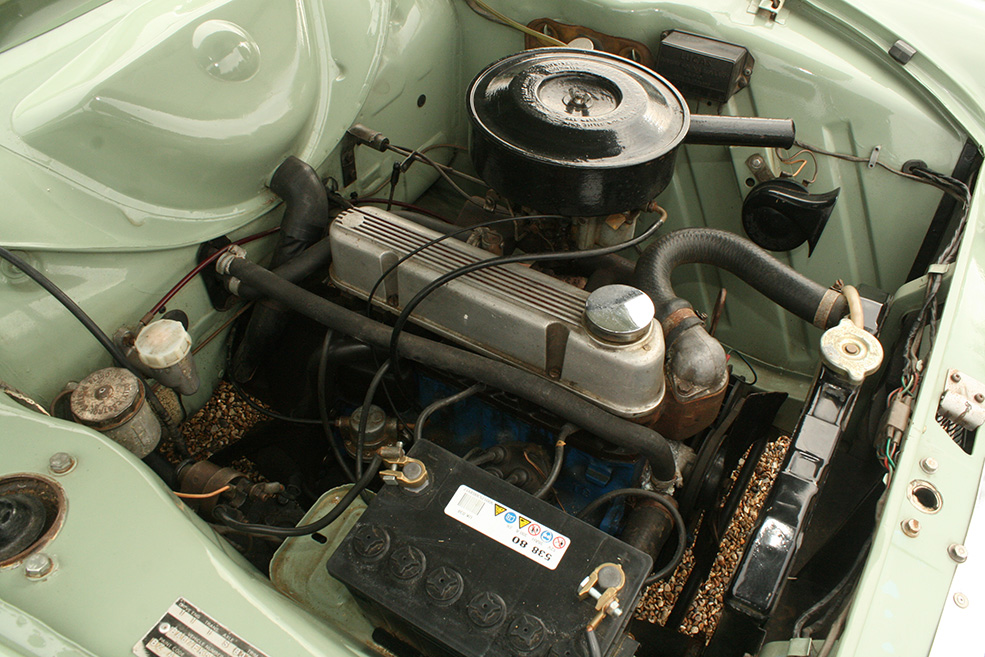