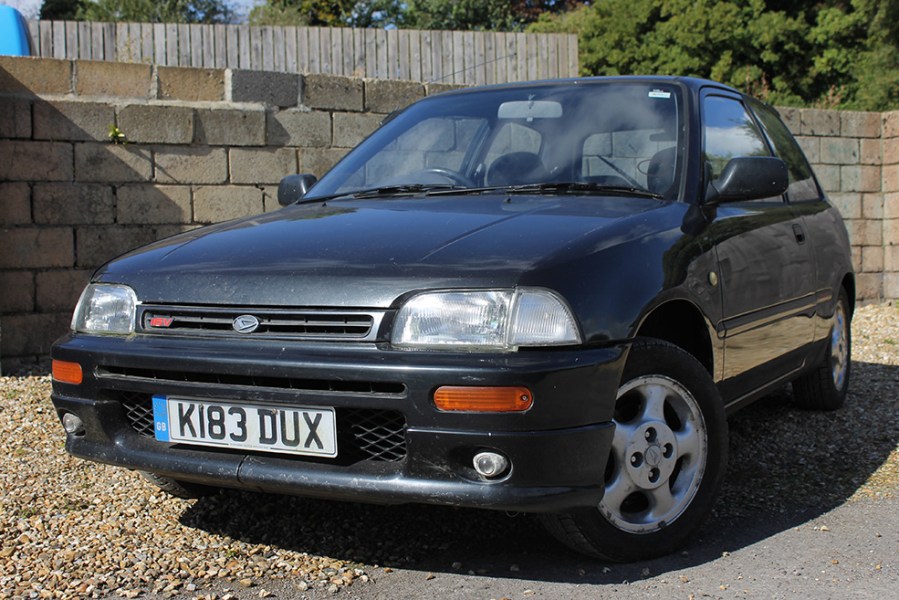 As the Nineties wore on, the hot hatch became increasingly stigmatised. Vilified by joyriders and lambasted outside the motoring press, insurance premiums soared. While Mazda’s MX-5 revived a moribund sports car market, off roaders became the other niche purchase for those with enough disposable income.

Daihatsu, having supplanted its G100 Charade with the new G200, replaced the GTti with the GSXi. While the former car is sought after (and valued accordingly), the latter Charade ended up forgotten.

Autolink UK acquired its GSXi two years ago as a project vehicle. Parts for G200 series Charades (particularly the G201 GSXi) are notoriously hard to come by; as a result, it was only recently that it returned to the road.

Cosmetically, the car needs attention. Overall, the Charade’s paint is tired: lacquer peel can be seen on the roof. The front bumper, complete with aftermarket fog lights added by a previous owner, has similar problems. Daihatsu was criticised in period for not specifying auxiliary lamps as standard equipment within the GSXi’s 1993 asking price of £10,850.

The rear arches, while presently sound, are just beginning to crack with corrosion. If treated quickly, that’s as far as the rust would go – provided you also attended to a small scratch on the offside rear and buffed out some other scuffs. The perfectionist might also want to iron out the ripple in the passenger’s door and fit the rear mud flaps back on to the car; they’re included as part of a pretty extensive spares package that includes spare headlights, an instrument pack and charging ancillaries.

Moving round the car, the outer sills are grubby but serviceable – the same goes for the inners and all the major components, which all have surface corrosion (as reported in the last MoT).
The nearside and offside corners were patched for the last test.

Tyres are a mixture of perished Barums and GT Radials: luckily, decent replacement 175/60/14 tyres are still fairly cheap. The Charade’s standard fit alloys, while unkerbed, are pitted with signs of corrosion.

At the rear, a stainless rear pipe and back box is fitted – like many contemporary Daihatsus, OEM replacements are hard to come by. At approximately three inches in diameter, the back box suits the sporty nature of the car, but is as subtle as using a foghorn as a lullaby.

The interior is excellent, with no cracks on the dashboard or tears in the upholstery. The seats, unique to the GSXi, carry a GTI logo, confusingly enough – in the rest of Europe, G201 GSXis were sold as GTis. An early Noughties Blaupunkt head unit is fitted; luckily, neither the door cards nor parcel shelf have been drilled for larger speakers.

Under the bonnet, oil and coolant levels are where they should be – although the engine bay itself would benefit from a steam clean. The factory fitted strut brace is present and correct, and a previous owner added a custom made 4-into-1 exhaust manifold. 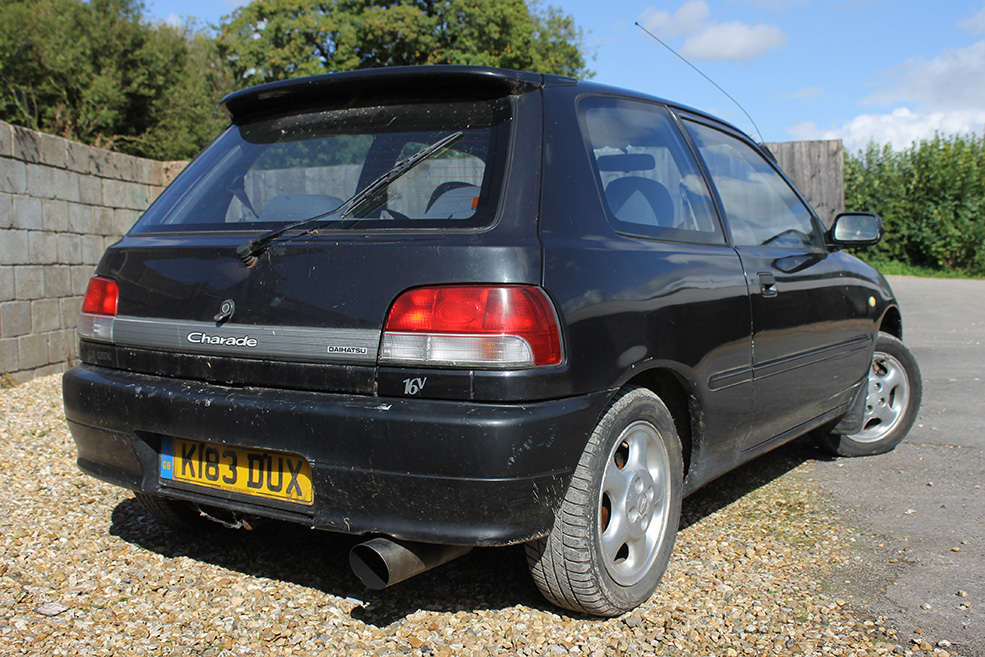 ON THE ROAD
With a drone from the large rear back box, the Charade fired easily, the gearbox sticky from cold. Once up to temperature, the GSXi was a joy to drive, the power assisted steering allowing easy manoeuvring if not the last word in driver feedback. The engine in the test car, a 1.6-litre, single cam 16 valve ‘HD-E’, wasn’t the car’s first: it had a donor unit installed at 86,000 miles. Thanks to well-spaced pedals and a close ratio gearbox, it was enjoyable keeping the GSXi on boil. Getting the most out of the car meant plenty of revs – a typical requirement for multi valve engines of the period.

Though soft by modern standards, the GSXi rode tolerably with no knocks and bangs from the suspension or bushes. The brakes, minimally servoed, were easy to heel-and-toe. 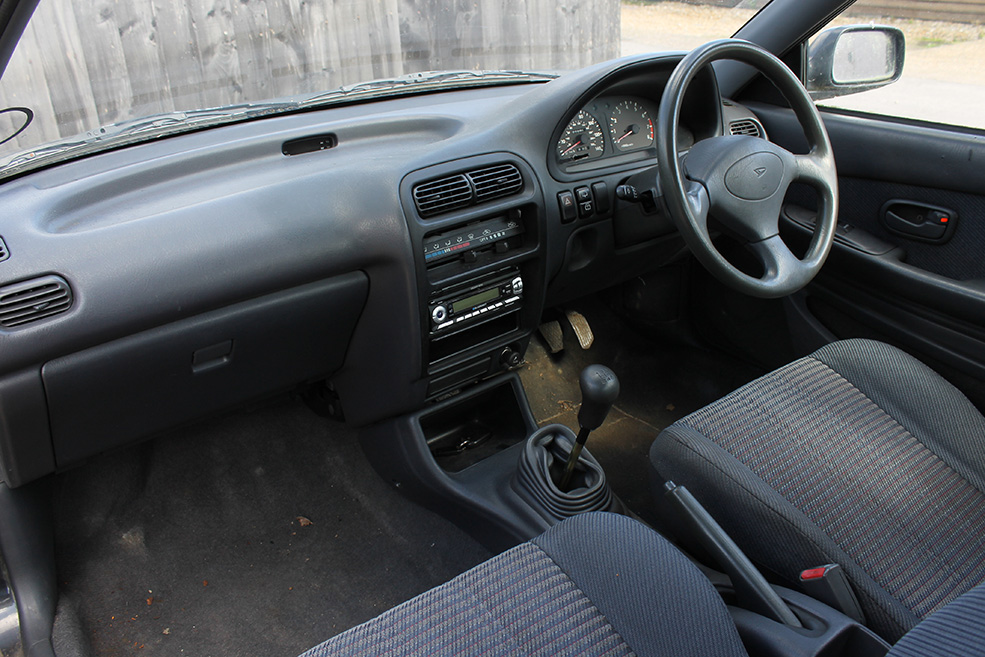 VERDICT
View Autolink’s Charade GSXi as a rolling restoration with a heathy spares supply and you won’t be disappointed. There are so few of these cars left on our roads that you may not get another chance to buy one for a while. Its current condition makes it an ideal candidate for recommissioning, or as a cheap and unsual track day toy – the choice is yours. 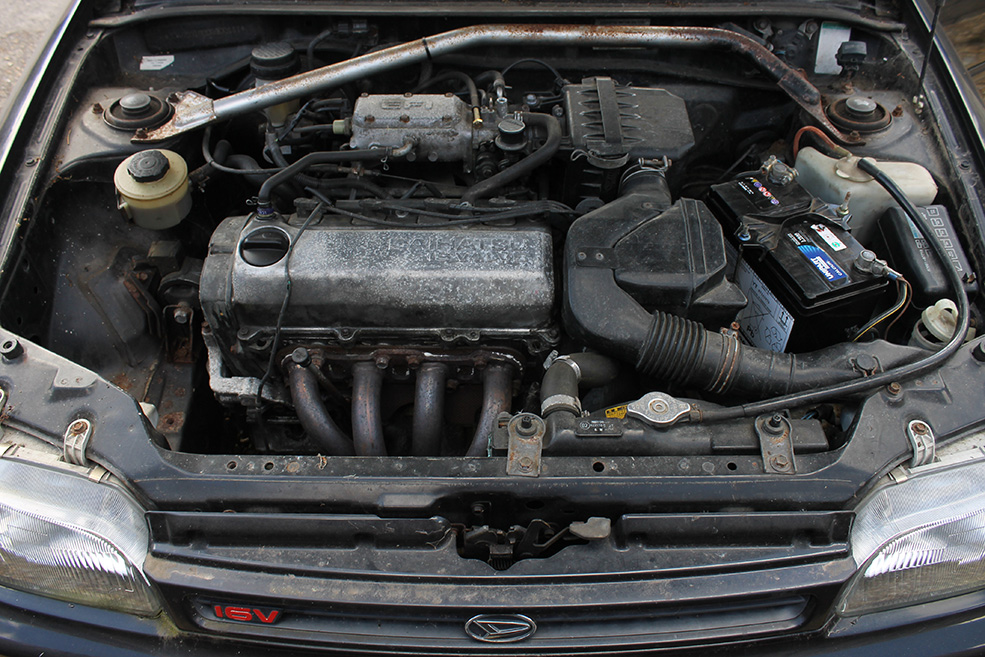