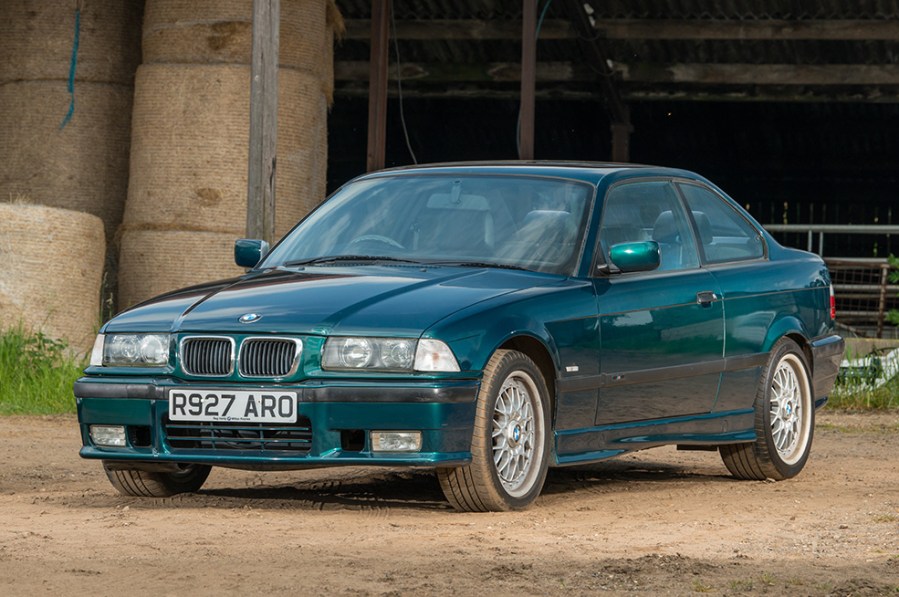 The success of the E30 3 Series in the Eighties established BMW with a big share of the compact executive car market and they weren’t about to let it slip with the next generation. The 3 Series had a reputation for style, German-engineered reliability and in larger six cylinder format, it also had a fair turn of speed. The new-for-the-Nineties E36 version of the 3 Series needed to be more than a mere facelift.

Launched in 1990, the latest 3 Series was larger and boasted numerous improvements. The four door saloon came first, soon followed by a coupé, convertible, estate (Touring) and even hatchback (Compact). Up front, there were still four and six cylinder engines and initially the most powerful was the 2.5 litre 325, though from 1994 capacity and power were increased with the arrival of the 2.8 litre 328. If this wasn’t enough, a 3.2 litre M3 high-performance version was also available.

Front suspension was by well-located MacPherson struts and at the rear, BMW added a new multi-link independent system. The revised rear suspension layout answered a dynamic flaw in the previous 3 Series, which had often been criticised for its tail-happy handling. The more powerful models were fitted with vented disc brakes all round and antilock braking was introduced as an update during production. The new 3 Series was an immediate sales success.

Turning our attention to the coupé-bodied variant of the 3 Series, it’s important for potential buyers to be aware of the many possible specifications. Four cylinder models were badged as 316, 318 and finally the more sporty 318is, with a twin cam engine. The six pot designations are still more complex, including a 2 litre 320i, two different 2.5 litre engines badged 323 or 325 and the 2.8 litre 328. Today we focus on the 328 as the range-topping model if the exotic and expensive M3 variant is excluded. Various trim levels were offered and the desirable M Sport pack included front spoiler, side skirts and 17 inch BBS alloy wheels. 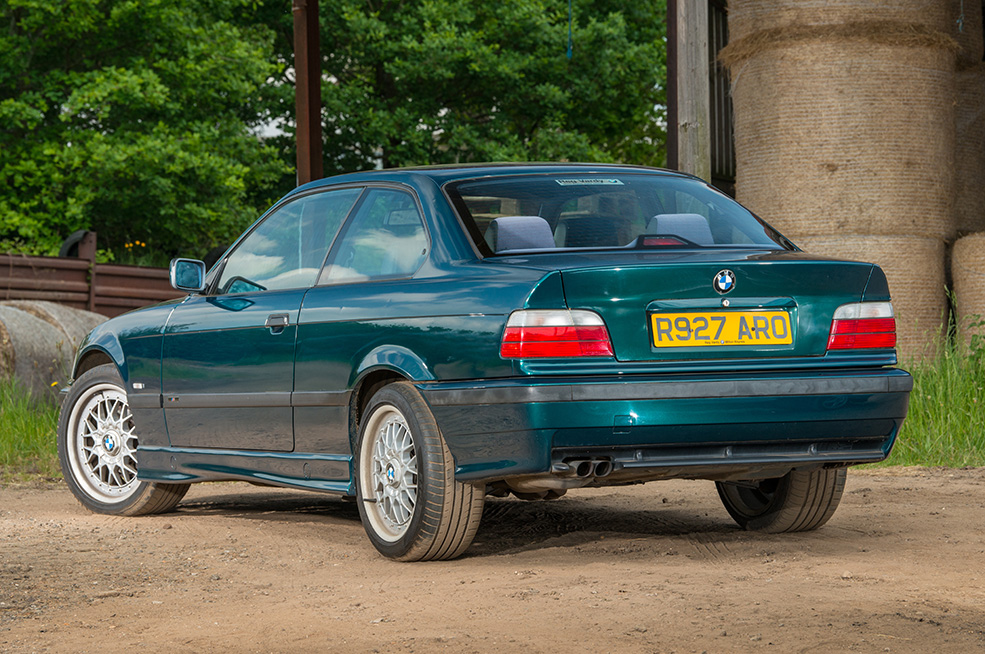 Our car today is a 328 M Sport, with a mere 56,000 miles on the clock and a very smart half leather interior plus air conditioning, so a great specification. Marcus explains: ‘this was my mother’s car, which she owned from new, so I know its entire history, it’s been looked after and always serviced according the dashboard indicator’. One owner 328 Coupés with low mileage are getting rare, so this is a tempting opportunity for a new enthusiast owner.

The Boston Green metallic paint gleams and the dark colour makes the car appear a little smaller than its 14½ feet length suggests. Externally, the car looks smart, though as Marcus points out, the BBS alloy wheels would benefit from refurbishment before long. The bodywork is completely free from serious corrosion and those perennial BMW rot spots the wheel arches are totally sound. However there are a few minor blemishes from stone chips and the bonnet has been repainted. However, it wouldn’t take much to make this BMW immaculate again.

Open the door and the window glass performs a party trick, dropping a few millimetres on opening then rising again as it’s closed. To minimise high speed wind noise from the frameless door design, the window cleverly tucks into the roof gutter trim when closed. Inside, the comfortable sports seat adjusts well to almost any occupant’s height and the high quality moulded dash angles toward the driver, with instruments clearly visible through the steering wheel. The interior shows minimal wear and is very well preserved.

Start up, and at tickover, there’s only a muted thrumming to indicate the engine is running. The BMW VANOS variable valve timing unit was replaced under recall so there’s no sign of the dreaded rattle from the top of the engine, a known weakness of the M52 engine. The clutch has a light, springy action and the short gear level slots precisely through the five speed gate. Pulling away smoothly, the exhaust emits a purposeful growl. Acceleration is rapid but the car always feels poised. The power steering is nicely weighted and handling is reassuringly neutral, with a composed, quiet ride. Four vented disc brakes bring down the speed without drama and like the steering the brakes are nicely weighted, lacking the over-servoed effect of some modern cars.

The BMW is equally at home wafting around gently, hustling through the twisty B-roads or in fifth gear cruising long-distance on the motorway, managing everything with comfort and composure. Asking prices for flawless BMW Coupés of similar mileage and history are now approaching £10,000, so this example offers decent value with a little scope for improvement factored in the price. 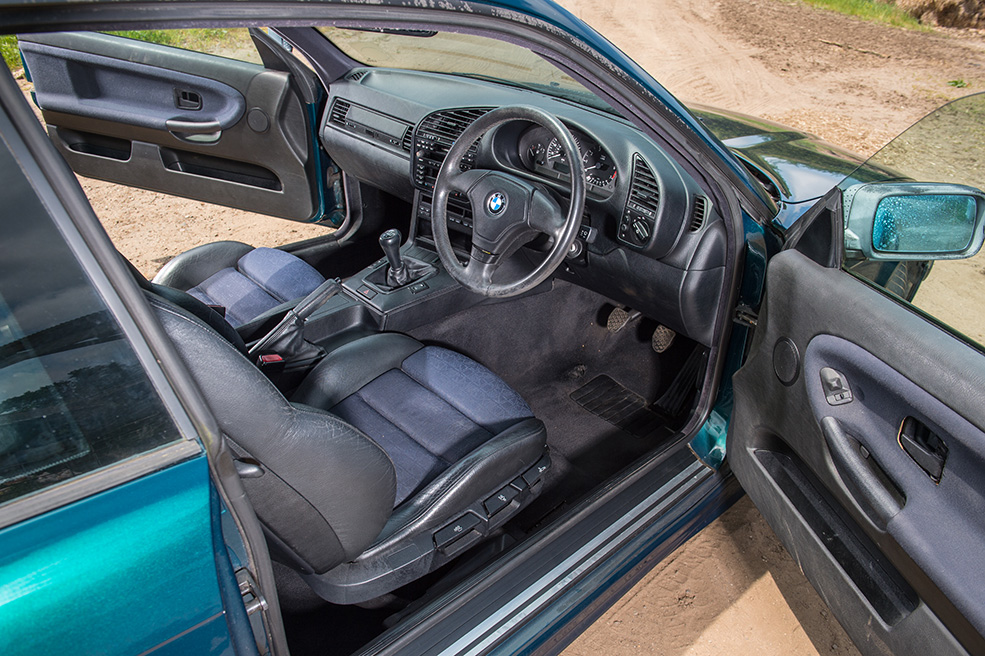 VERDICT
This BMW is a totally sound one owner, low mileage example of a classic which is just starting to appreciate in value. As an M Sport with popular options included, the specification is ideal. Spend a little money to tidy up the minor bodywork blemishes and refurbish the BBS alloys then the car would be immaculate. Preferably keep the 328 Coupé to enjoy its blend of performance and practicality, but if the new owner chose to move it on quickly, at this asking price we believe his investment would be handsomely repaid. 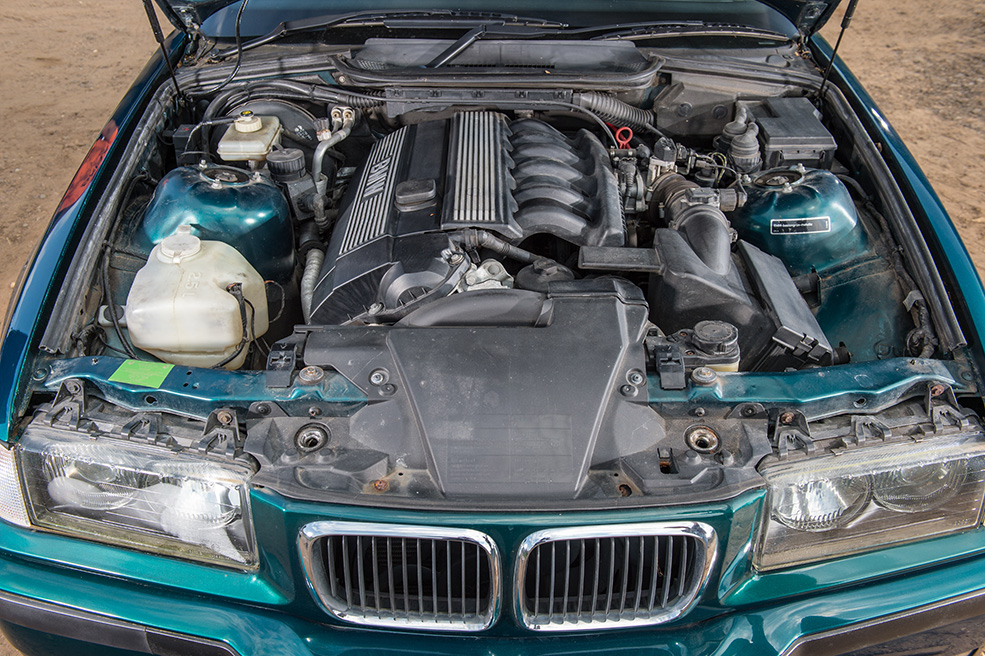