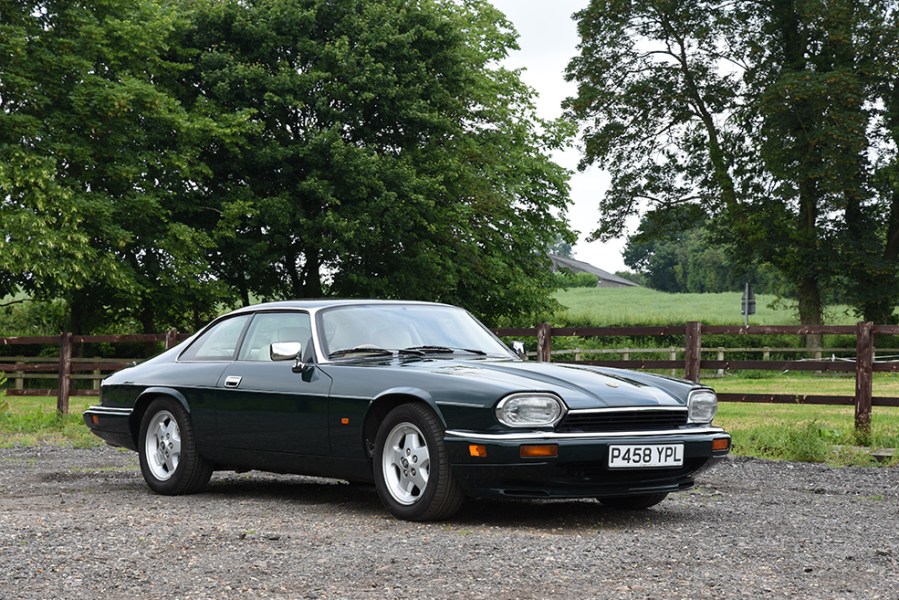 The XJS weighs in at nearly two tons and has no sportscar pretentions whatsoever. Developed on a short wheelbase XJ6 platform, the two door body was penned by Jaguar’s in-house styling team, and borrowed much of the XJ saloon’s running gear. Judged impartially, The XJS is a good car in either six or twelve cylinder format, though early examples were let down by poor quality control and rapid corrosion. By the Nineties, Jaguar had sorted their quality problems, the new AJ6 six cylinder engine had arrived and from 1994 all cars were galvanised. This adds up to make a late XJS 4.0 one of the most desirable specifications. Typical Jaguar upmarket style, sufficient power and built to last, with enough boot space for the golf clubs. What more could a well-heeled buyer want?

Released in 1996, the final year of XJS production, the Celebration special edition featured several upgrades including diamond-turned alloy wheels, embossed seats and a wood-rimmed steering wheel. No matter these toys were largely cosmetic, the final XJS was already an accomplished, thoroughly developed automobile. Out-dated or even old-fashioned alongside contemporary offerings from Mercedes, the XJS was halfway to being a classic when new and is surely worthy of classic car status today. 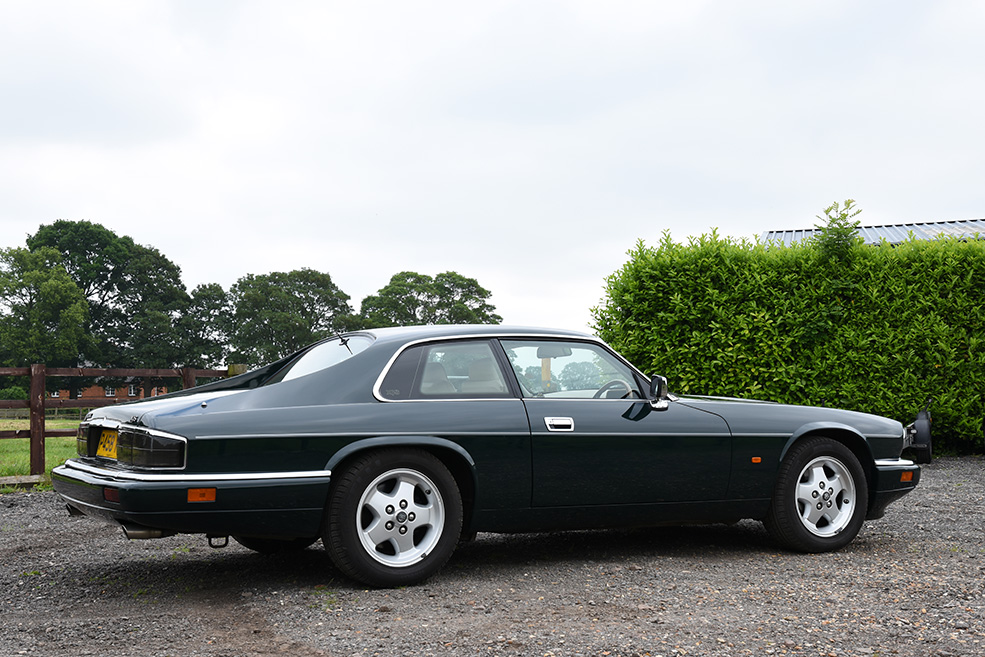 However, the classic car market currently seems a little conflicted by the XJS. Is it a bona-fide, bankable classic or is it just another old Jag? As a result, asking prices can vary widely but good cars are beginning to move upwards. From a price ceiling of £5,000 just a few years ago, the best cars can now make well over £10,000.

This 4.0 Auto Celebration has had only four owners, and over its 78,000 recorded miles has been fully serviced, first by main agents and later by respected Jaguar specialists. The current MoT test certificate shows no advisory warnings. Priced at £13,500, it certainly isn’t cheap, but can this car’s quality justify the premium price tag?

The Sherwood Green paint suits the car well, being reminiscent of traditional British Racing Green. The finish is in excellent condition with a deep shine and few age-related marks. The bodywork appears straight with good shut lines, no obvious signs of accident repairs and no visible corrosion. The alloy wheels appear to have been refurbished recently and as a result, all four are free from blemishes. The interior also presents well and the parchment leather compliments the dark green exterior. The deep pile carpets are free from wear and the leather is as new, save for a little marking on the driver’s seat bolster. The wood veneer of the dashboard remains in pristine condition and the curved centre console veneer hasn’t lifted or cracked; a common fault with Jaguars of this era.

The engine bay is similarly clean, without signs of fluid leakage. The AJ6 starts immediately and idles with a faint mechanical rustle, sounding in perfect health. Engage drive and the four speed auto doesn’t clonk, though the car is keen to creep forwards. Release the brake, apply a whiff of accelerator and the big car purrs down the road. The ‘box changes up and down without fuss; both engine and transmission are smooth and quiet at normal road speeds. Some may feel the need for the ultimate powerplant, the 6 litre V12 but in the real world, the 4 litre six is impeccably smooth and delivers more than enough power for this heavy car. Add to that the smaller engine’s greater fuel economy and the AJ6 would be our choice for the XJS.

The steering is light but still communicates some feel. Ride is superb, with imperfections in the road surface almost undetectable within the cabin. It’s a big car, not suited to hustling through B-road bends but as a long distance tourer, it is magnificent. Jaguar designed the XJS for such a role and this particular example feels fresh and ready to carry its cossetted occupants from one end of the country to the other. The Jag’s sumptuous interior is a very relaxing environment in which to travel. 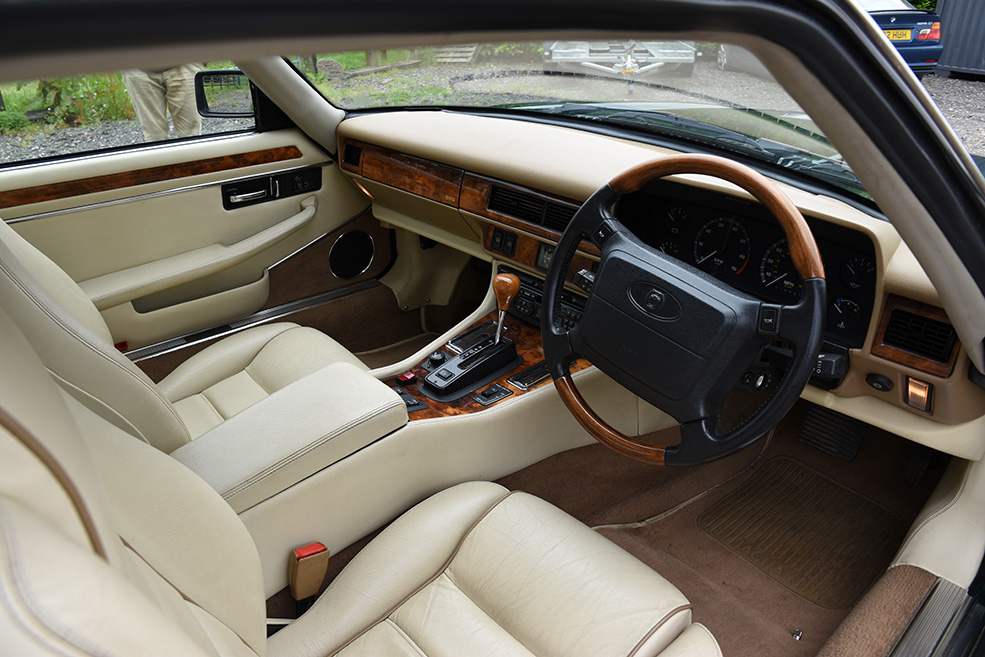 VERDICT
The Celebration special edition is one of the most desirable specifications for the XJS and this one’s superb inside and out. The Sherwood Green paint and parchment leather suit the car perfectly. Being a later car, it benefits from a galvanised body so should remain rust-free. It drives exactly as it should and comes with a full service history. 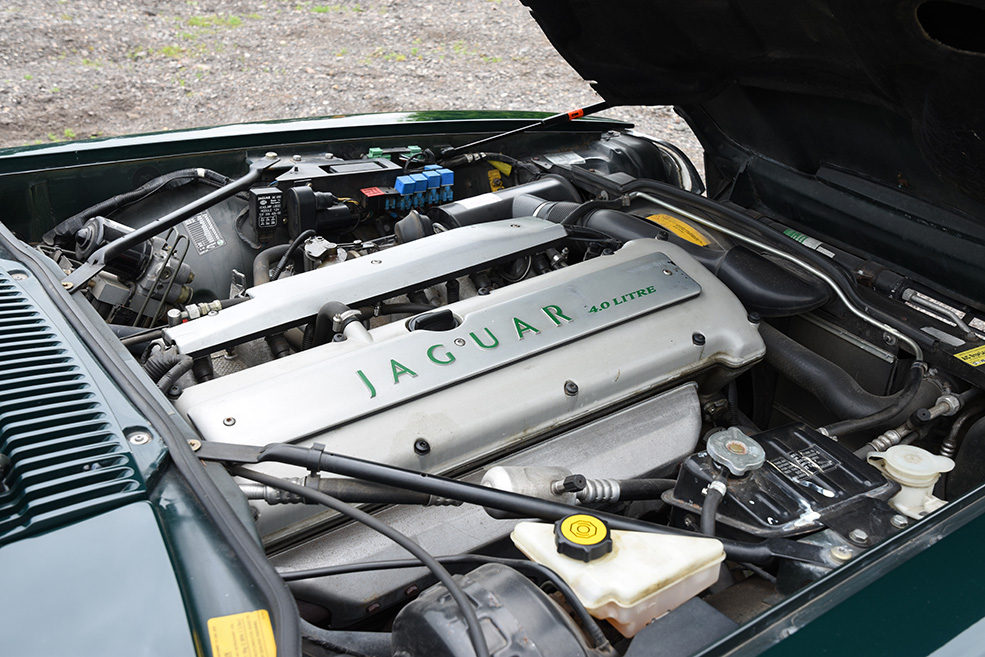