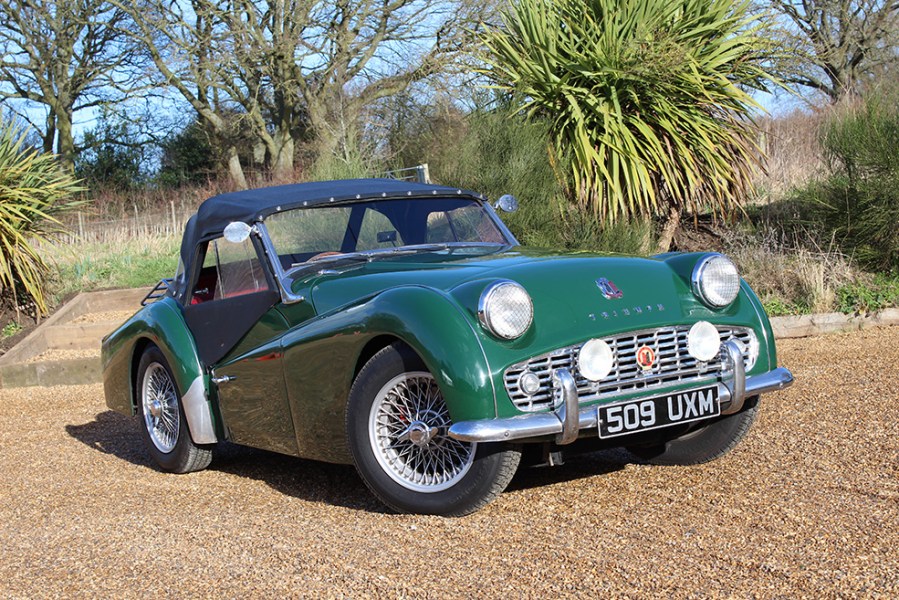 As with nearly all British sports cars the vast majority of TR3s (around 85 per cent) were exported, and of that most went to North America. This goes for this example at Pioneer Automobiles, which was shipped from Canley to the other side of the world. But instead of America the TR went in the other direction – to Singapore. This makes it a very rare case of an original export-model RHD car, a status that is confirmed by a heritage certificate in the car’s expansive file of paperwork.

If utter and literal originality is important, this TR3A is not for you. It has been rebuilt twice in its life. The first was in 1988, when it was repatriated from the East and received a complete body-off bare-metal restoration, for which there is an excellent photographic record. At the same time the drivetrain was fully rebuilt by Oselli (a firm as famous for maintaining and tuning classic sports cars when this car was new at it is now), as was the suspension and the rear end received telescopic dampers in place of the original lever arm types. Since then the engine has been further improved by the addition of an unleaded cylinder head, a balanced crankshaft, oil cooler, a high-torque starter and a full stainless steel exhaust. The car was resprayed into its current green colour (a period-correct Triumph hue, but not the one it left the factory with) in a similarly thorough job in 2005. More recently the TR has been treated to a new hood and a set of tonneau covers and new cockpit carpets. 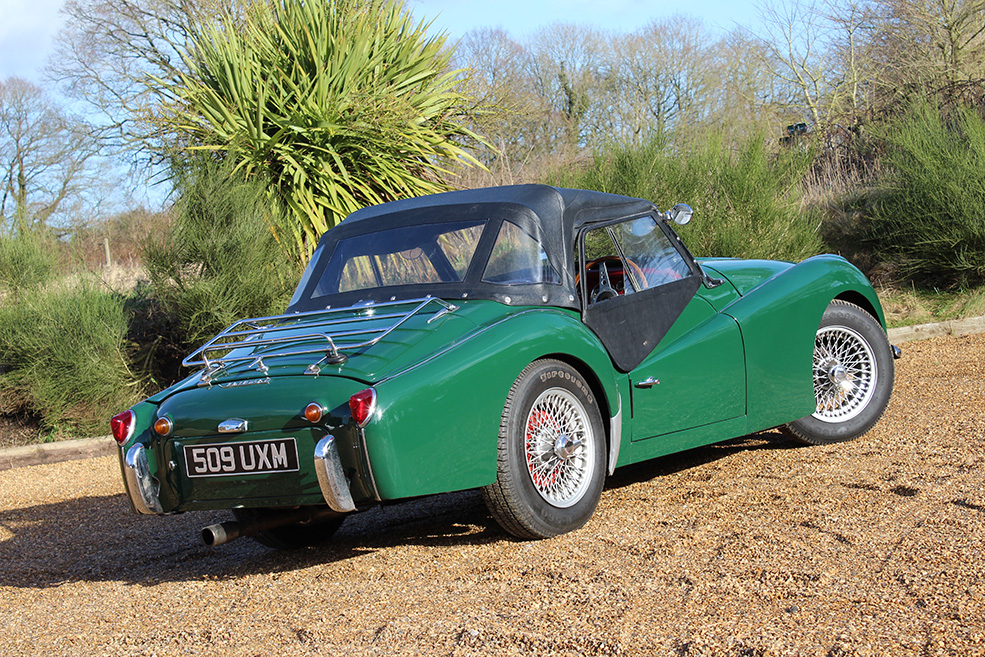 ON THE ROAD
All that dedication and high-quality work becomes obvious behind the wheel. It was powerful, lightweight cars with very traditional running gear like this TR3 which gave Triumph its reputation as a somewhat more macho and demanding marque than the likes of MG or Sunbeam and this car certainly doesn’t cosset you.

With the hood up you squeeze into the cockpit and perch on a narrow, firm seat with your right arm pressed right into the door, your legs out almost perfectly straight and the centre of the Moto-Lita wheel virtually on your chest (and this is despite the adjustable seats). The sturdy wet-liner engine starts literally ‘on the button’ and runs smoothly. The stubby little gear lever, almost hidden under the dashboard, snicks into first easily and with the lovely precision-machined mechanical feel of early TRs. And of course there is a fly-off handbrake so you’re left with no doubt that you’re dealing with something from the golden age of classic sports cars. 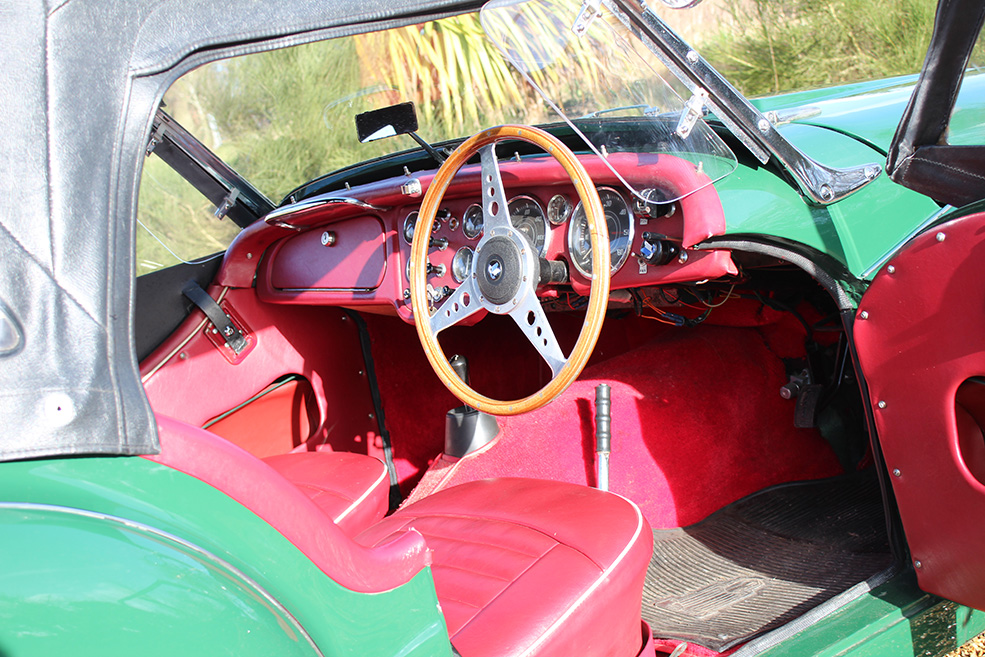 While part of my test drive was done with the hood up, to get the full TR experience really have to run with the hood off and the side screens removed. Even in January in a car with no heater (a luxury that would have to wait until the TR4 came along). In typical British sports car fashion the side screens won’t fit in the boot, so you either have to stow them untidily behind the seats as I did or choose before setting off whether you’ll want side windows or not. Boring along an empty B-road at 50mph, flicking the overdrive in and out for the corners, the percussive exhaust beat bouncing off the trees and your right elbow hanging over the low-cut door seemingly just inches from the tarmac in this Triumph is a raw, almost primeval experience but one that is hugely enjoyable.

In bald analytical terms this TR3 drives as well as you could expect. The steering (via a box) is vague around the mid-point and then rather twitchy once it gets into action, so the first few miles consist of more swerving than cornering. The wheel travel is short and the springing is stiff. All the controls – steering, gears, clutch and even the pioneering brakes with front discs, are heavy yet require a certain amount of finesse to get the best out of the car. Old Triumphs are challenging machines. They are sports cars in the sense where driving them briskly is where most of the sport and enjoyment is to be found. 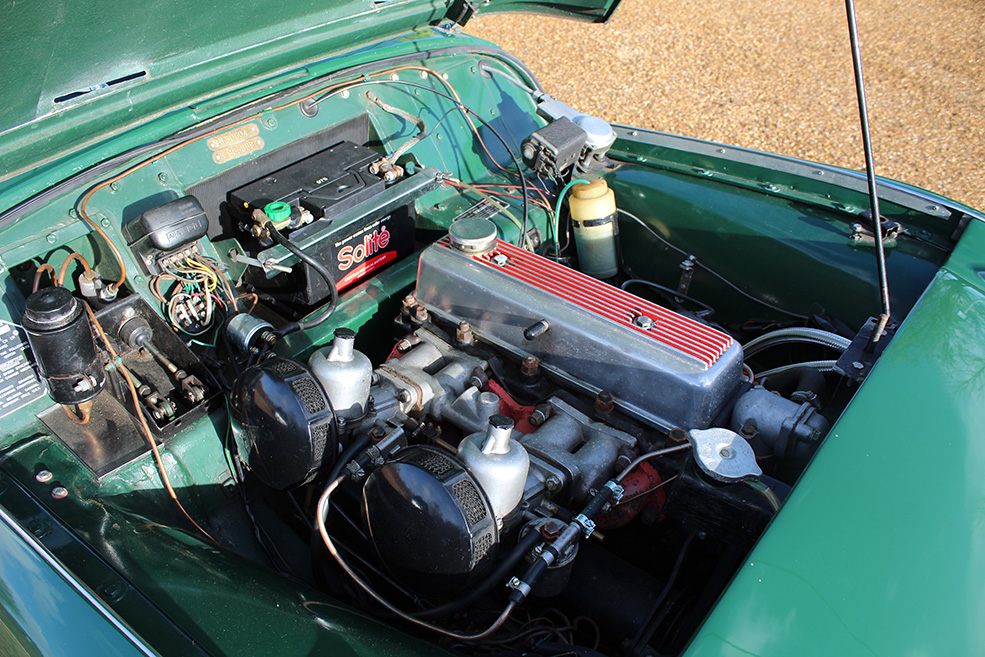 TRs are all rugged machines but this one feels especially solid and dependable. It’s not a fragile thing that you feel needs to be pampered. If you wanted to drive this car for hundreds of miles I’m sure that you would need to stop for a breather and to stretch your legs before the car showed any signs of strain. That is the real appeal of a TR like this as a classic – the high quality of the engineering, on top of which comes this specific one with a superlative restoration. It’s also packed full of lovely little details, from the symmetrical array of ancillary gauges in chromed bezels set into the red leather-trimmed dashboard, the way you have to use a carriage key to open the bonnet, remove the side screens or access the spare wheel, the indicators operated by a long stalk sprouting from the dashboard near your right hand or the large wooden handle strapped into the boot for removing and tightening the knock-off wheel hubs. Everything looks, feels and sounds crisp and new. This is a car you could deservedly take a lot of pride in owning, and a huge amount of satisfaction in driving.