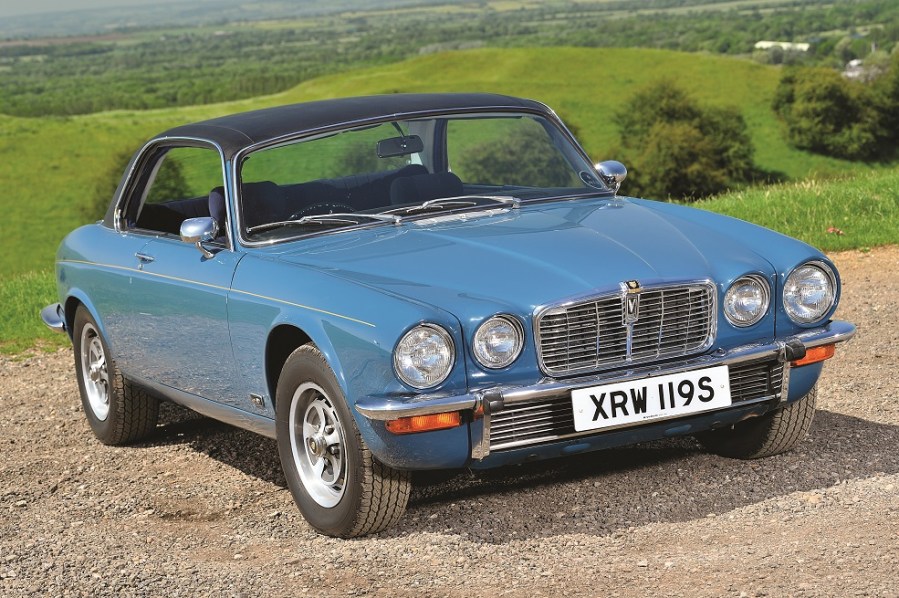 Aesthetics are, of course, a subjective matter, as confirmed by the old adage about beauty being in the eye of the beholder. One person’s idea of a good looking car might be seen by someone else as a styling disaster. But how many people would disagree that the two-door coupé version of the Jaguar XJ is a damned fine-looking machine? Precious few, I’d wager. Indeed, of all the variations on the ‘Series’ XJ theme, the XJ-C is surely one of the most attractive and most appealing, making it all the more tragic that it was also one of the shortest-lived members of the XJ family.

A short production run inevitably meant modest sales figures for the XJ-C, making it a relatively unusual sight even when new – and, of course, something of a rarity all these years later. Any well-preserved XJ-C is therefore a special machine, though none can compete in terms of ‘specialness’ with the example featured here. This, you see, is the very last Jaguar XJ-C ever built – and our friends at the Jaguar Daimler Heritage Trust (JDHT) were kind enough to remove it from display at the Gaydon-based Collections Centre and allow us to experience this unique example for ourselves.

Jaguar had experimented with a two-door coupé concept of the XJ prior to the launch of the new saloon in 1968, and the following year built the first prototype based around the bodyshell of a Series 1 XJ6. It wouldn’t be until well after the Series 2’s 1973 arrival, however, that a two-door coupé version of the XJ would finally reach production.

The Series 2 marked the successful update of a phenomenally successful model, bringing with it a variety of visual changes in order to give the XJ range a useful freshen-up. The shallower front grille and raised bumper line offered a more modern look, with the interior also being treated to a host of upgrades. The dashboard and controls were subtly simplified (the air-conditioning and heater controls in particular had been criticised on the Series 1), with other switchgear also modified in order to comply with the latest safety legislation. 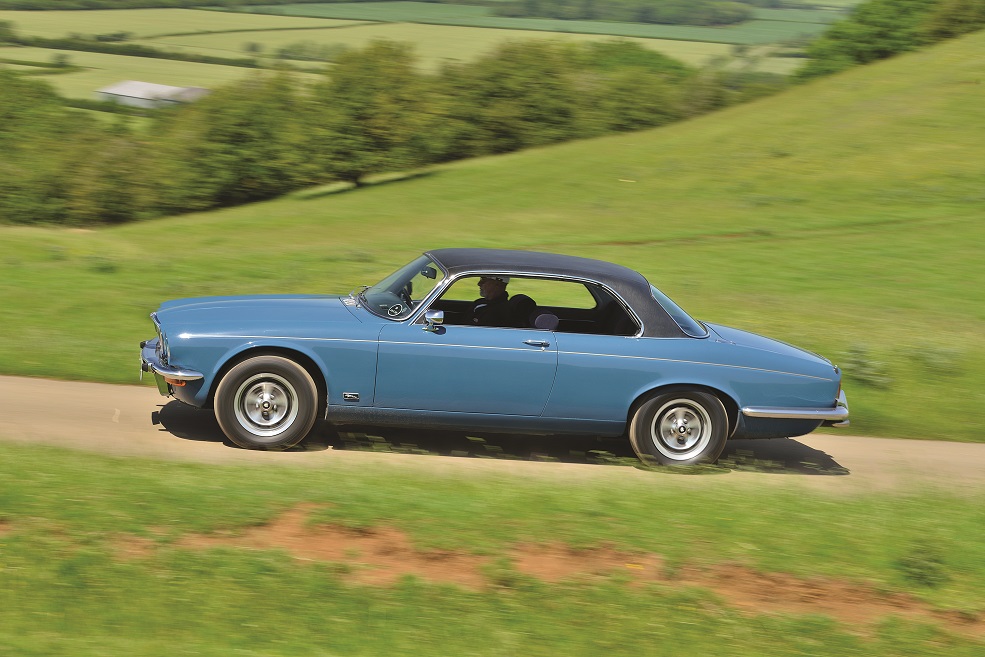 The Series 2 saloon was initially offered in both standard and long-wheelbase guises, but from late 1974 the smaller version was discontinued. That shorter wheelbase length would then re-enter production, however, when the two-door coupé – known as the XJ-C – finally (and rather belatedly) went on sale. Originally unveiled as part of the new Series 2 line-up in the autumn of 1973, production of the XJ-C was delayed until the 1975 model year, partly because of engineering challenges with the car itself. Without the central window pillars of the saloon, for example, the coupé’s body lacked structural rigidity and suffered severe wind noise. The former difficulty was dealt with by widening and strengthening the rear window pillar, but the latter solution was a little more complex.

The noise was caused by the tendency for the front side windows to be pulled slightly outwards at speed, away from the seals of the rear side windows. Prior to production beginning, however, Jaguar came up with an ingenious pulley and cable system that pressed the front windows inward toward the seals. The effect was a dramatic fall in high-speed wind noise, and a two-door coupé that was almost as refined as the four-door saloon from which it was derived.

Bigger doors (four inches longer) were obviously needed for the two-door XJ to improve the car’s appearance and to aid rear seat access, with these being made from two standard door shells cut down and joined together. A vinyl roof also came as standard, possibly to counteract paint cracking issues that arose during development, but also because it was seen as a desirable feature at that time.

Prior to going into production, around 20 XJ-C prototypes were hand-built by Jaguar, 14 of them in 1973. Eventually though, the car was ready for production to begin by 1975, with a four-model line-up comprising the XJ-C 4.2 and its 5.3-litre V12 equivalent, with the Daimler-badged Sovereign and Double-Six versions offering even more prestige at the top of the range. For the American market, however, just two models were offered, badged as the Jaguar XJ6C and XJ12C.

While the four-door versions of the XJ went on to enjoy a phenomenally long career (from the original Series 1 XJ6’s launch in 1968 through to the demise of the Series  XJ12 in 1992), the two-door XJ-C derivatives were very short-lived by comparison. Official production of this new XJ coupé didn’t get under way until 1975, and by the end of 1977 it was being killed off – after a total run of just 10,426 cars. 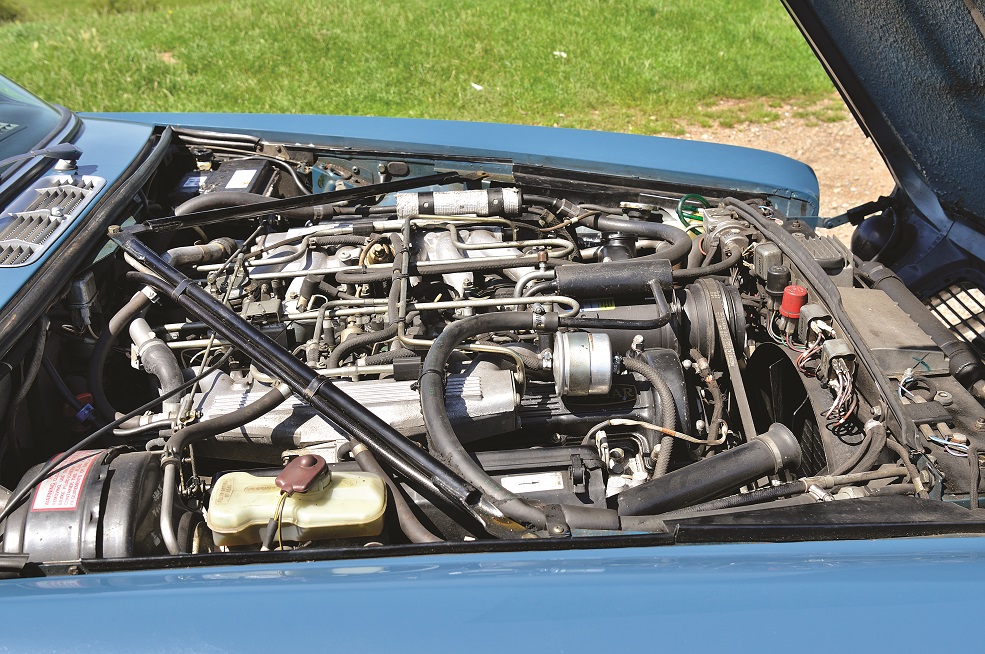 The Jaguar XJ-C family wasn’t a huge commercial success for Jaguar, with the total production figure mentioned above being made up of 6487 4.2-litre Jaguars and 1677 Daimlers with the same engine, plus 1855 V12-engined XJ-Cs and just 407 Daimler Double-Six models. By XJ standards, these were exclusive machines – not surprising considering the XJ-C’s relatively high pricing for what was a less practical car than the four-door on which it was based.

By the time this final V12-engined XJ-C rolled off the production line on November 8th, 1977, its list price was a hefty £11,755. By comparison, the longer and more commodious XJ12 saloon could be had for £10,668, making it the best-value choice for those Jaguar buyers seeking V12 motoring.

From a purely commercial point of view, it perhaps made sense to kill off the XJ coupe. It was, after all, the only model to still use the old short-wheelbase platform, and worldwide sales weren’t sufficient for it to generate a profit. British Leyland was a loss-making giant that needed to cut costs, and the XJ-C was an obvious choice for the axe – despite it generating plenty of publicity for Jaguar, not least through the Leyland Broadspeed racing division that saw competition versions of the XJ-C competing in the European Touring Car Championship.

The very last XJ-C was retained by Jaguar for posterity, and these days it’s part of the JDHT’s collection, kept on display at the Trust’s Gaydon-based headquarters. Vehicle collection manager, Tony Merrygold, recently agreed to extract the car for us, however, providing an opportunity to experience the ultimate XJ coupé – one that still had fewer than 12,000 miles on its odometer as it emerged into the mid-summer sunshine for its first proper outing in some time.

As this particular XJ12 coupé rolled off the production line in November 1977 (although it wouldn’t be registered until February of the following year), it marked the end of an important era for the XJ range. Despite plans from day one for there to be a two-door derivative, the XJ coupé didn’t go into full scale production until 1975 – and less than three years later, it was being killed off.

What had started out as an intriguing addition to the range, a model with the potential to bring substantial extra sales to the XJ line-up, soon found itself the victim of rationalisation and cost-cutting measures. 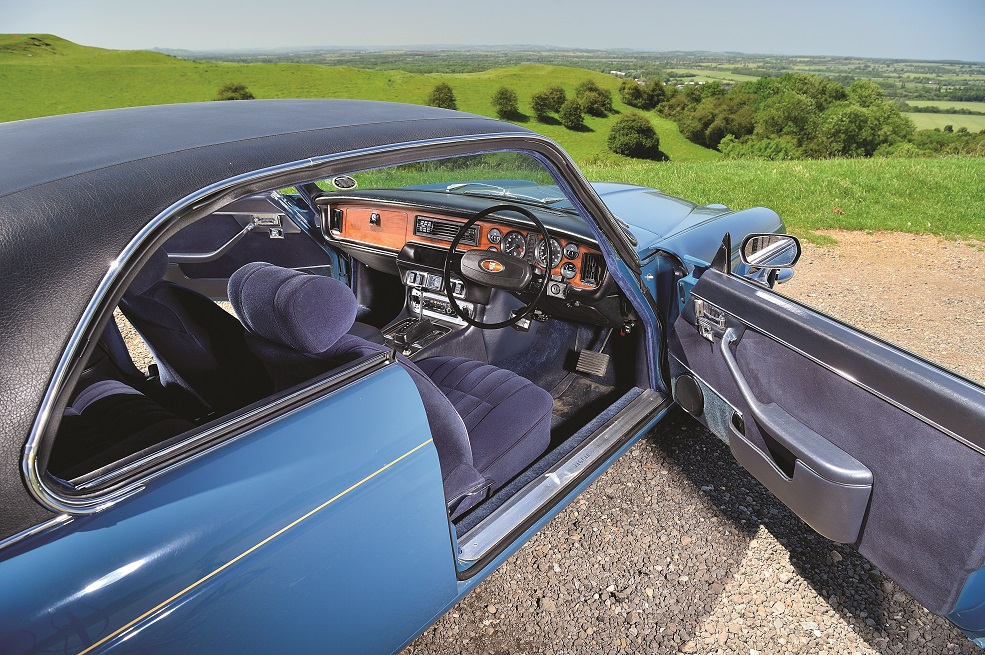 And so XRW 119S was to be the last of its kind, bringing the curtain down on an idea that never did achieve its full potential.

Finished in its original Squadron Blue with the XJ-C’s obligatory black vinyl roof, this unique example is, of course, ridiculously handsome from any angle. It is also in superb, original condition, with none of the aesthetic issues that have affected so many of its XJ siblings over the years. It is exactly as it left the factory, from the deep lustre of its paintwork through to its gleaming chromework, with its Kent light alloy wheels (a £321 extra-cost option when new) adding a touch of extra sportiness.

As you’d expect, it’s a similar story inside, with the matching blue velour seats and carpets being completely unworn, and the well-veneered dashboard being in the same as-new condition.

By the time this particular V12 was produced, the output of the biggest-engined XJ-C had increased substantially, from 253bhp to an even more impressive 285bhp thanks to the adoption of fuel-injection, an upgrade that improved both the performance and economy of the flagship two-door Jaguar. It has always been considered one of the world’s greatest engines, of course, and so we were looking forward to our on-the-road experience with this low-mileage V12, a powerplant that burst into life at the first twist of the key, as the JDHT’s ever-helpful volunteer driver for the day invited us aboard and we headed in the direction of nearby Burton Dassett Country Park.

This picturesque group of ironstone hills is located less than four miles from the JDHT’s Gaydon site and offers spectacular views across Warwickshire and beyond. And as we glided there aboard the XJ-C, it was impossible not to be impressed by this little-used example’s sheer ‘newness’. Not a rattle or a squeak could be heard, with the car’s low mileage and pampered existence being immediately evident. The Jaguar felt tight, exactly as it would have done when it first drove off the line. And with the V12 providing effortless (as well as effortlessly refined) acceleration through the rev range, complemented by super-smooth gear changes via the three-speed automatic transmission, it was the closest thing we could get to inventing a time machine and travelling back to 1977 for a test drive in a brand new example.

As photographer Matt Woods began setting up his equipment at Burton Dassett (having first made sure we’d fed the pay-and-display machine), it gave us a chance to take a closer look at what is surely the ultimate XJ-C. Pretty much everything about this car is original and unrestored, and that obviously applies under the bonnet where you’ll find an engine bay that looks exactly as it would have done almost 42 years ago – a refreshing change from some of today’s rebuilt cars, with underbonnet areas so detailed and perfectly finished that they often look overdone. This one is the real deal, and is all the better for it. 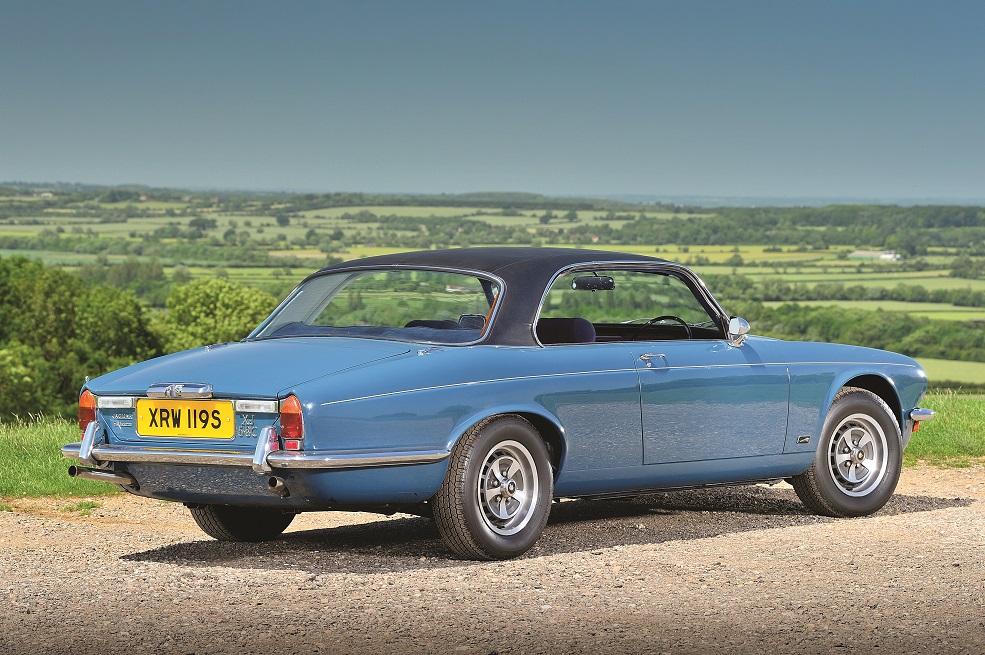 Amazingly, the JDHT’s XJ-C even retains much of its new car smell, something that can never be recreated on a restored example. And with everything inside and out having been placed there by production line workers and Jaguar employees rather than more recently by dedicated restorers, you’d struggle to find a more authentic ‘Series’ XJ than this.

The non-leather interior of this final car also gives it a particularly pleasing appearance, with the dark blue that features throughout being a perfect complement to the all-original Squadron Blue paintwork.

Being a Jaguar XJ-C, the front seat backrests obviously fold forward to allow access to the rear, where you’ll find accommodation that’s almost generous by coupé standards. It’s when all four of the car’s windows are lowered, however, that its pillarless design becomes truly appreciated, with the huge opening transforming the on-board experience, particularly for rear seat passengers.

Although spending a few hours with what is one of the lowest-mileage, most significant XJ-Cs in the world was a joyful experience for us, it was set against a backdrop of sadness and regret. What was meant to be an integral part of the XJ range from the beginning didn’t actually hit the market until well after the launch of the XJ Series 2 – and would disappear again long before the arrival of the Series 3.

It was a car that displayed much potential, particularly as the XJ-S – unveiled during the same year that XJ-C production finally began – was so controversial in its styling. But with its initial sales being relatively poor, the Jaguar XJ-C was never given an opportunity by British Leyland to properly evolve and develop. A project that had initially shown great promise was suddenly – and prematurely – at an end.