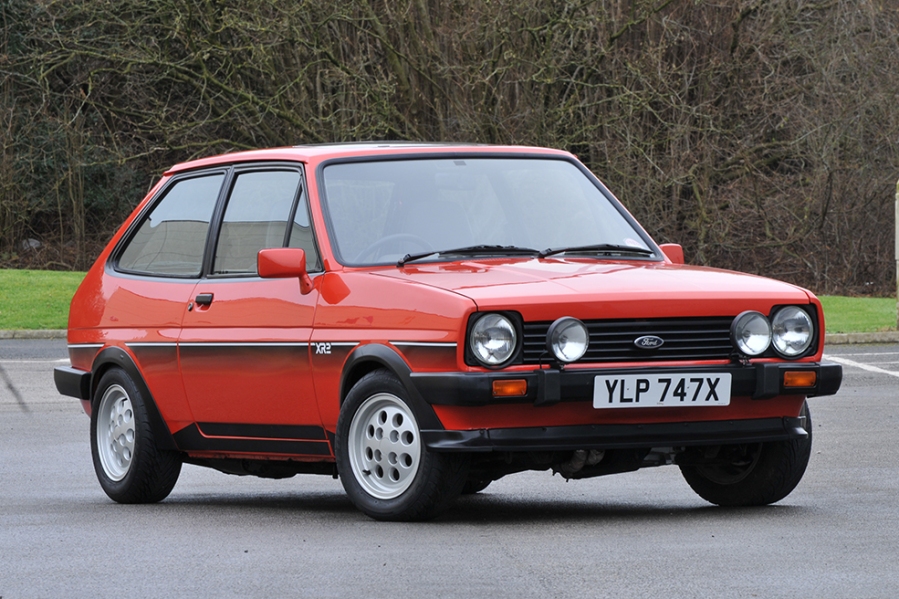 As the go-faster Ford Fiesta XR2 hot hatch celebrates its 40th anniversary, we revisit the first of the breed

Nothing sums up the automotive 80s quite as neatly as Ford’s XR badge but despite the often astonishing values of hot hatches wearing the blue oval, the original Ford Fiesta XR2 is a real rarity today.

Perhaps we shouldn’t be too surprised though: as a quick run up the road in this example proved, the combination of the lightweight Mk1 Fiesta and the 1600 Kent engine makes for an eager package which still feels surprisingly brisk today. No, it’s not in the same league as today’s turbocharged Ford Fiesta ST but still quick enough to be fun – and back in the 80s was fast enough to land hard-charging XR2 pilots on the wrong side of the hedge quite easily. Throw in the popularity for go-faster tuning back in the day, add the joyrider menace and a helping of body rot and it’s easy to see why they didn’t survive in huge numbers.

The recipe which created the Ford Fiesta XR2 was a simple one, but it also meant that the go-faster Fiesta was a hybrid of old and new. Whereas the Supersport which had tested the water in 1981 had employed the 1.3-litre Kent engine also found in other 1.3-litre Fiestas, the full-fat performance Fiesta looked to the previous era of the Escort for inspiration.

A 1.6-litre Fiesta wasn’t in itself anything new: the Fiesta had been conceived as a ‘world car’ and was in fact offered by Ford in North America until 1981, where it used the bigger engine in order to counteract the power-sapping emissions requirements.

In order to create a meaningful performance uplift over the spritely 66bhp offered by the Supersport however, Ford raided the parts bins both old and new to create a bespoke version of the Kent motor. 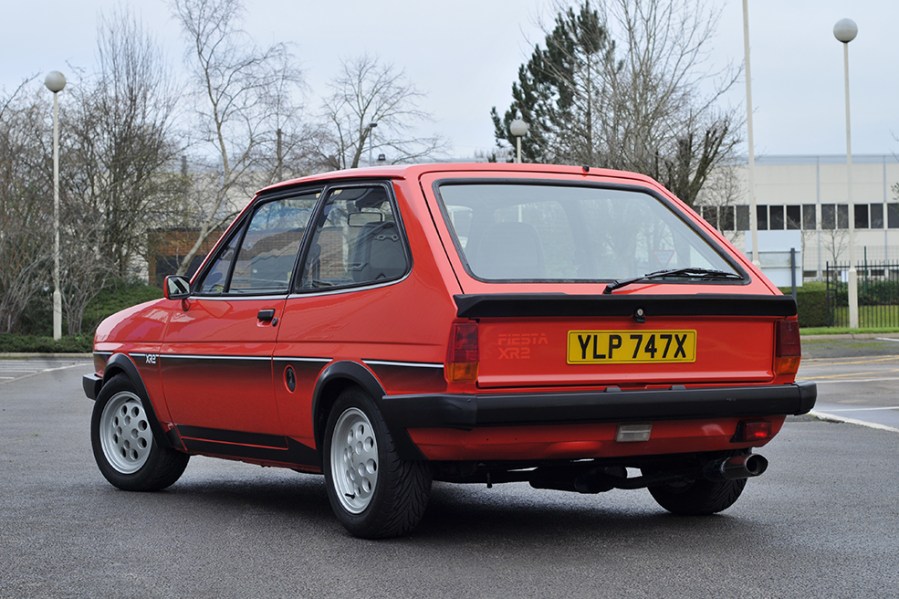 The bottom end was essentially the Federal-spec 1.6-litre Kent unit, on which sat a cylinder head resurrected from the old Escort 1600GT. The GT’s camshaft was also employed, with a large-bore intake manifold and a 32/34DFTA twin-choke Weber carb.

A new four-into-two cast iron exhaust manifold was developed for the European car to suit this combination, the system running under the sump to produce the characteristic rasp, while the transmission employed the stronger Escort gearbox with standard 1.6 internal ratios and a 358:1 final drive.

Suspension fundamentals were essentially unchanged, the Ford Fiesta XR2 using the same spring rates and anti-roll bar diameters as the 1300S and Ghia models, but with the car sitting an inch lower at the front. The front tie bar brackets on the bodyshell were also lowered to reduce pitch and dive under hard acceleration and braking, while the engine itself was lowered 15mm in the bay to reduce the operating angle of the driveshafts.

The dampers were revised to suit the more sporting XR2, as were the brakes. Rear discs may have been a stretch too far back then but the standard seven-inch drums gained larger-diameter wheel cylinders while the front discs were upgraded to vented 10-inchers, backed up with a bigger servo. The master cylinder and servo remained on the left though, meaning that the right-hand drive cars used a cross-linkage for the braking system – a common solution back then and one even used by VW for the Golf.

The SVE engineers also had a hand in the car’s appearance, specifying the 6×13 ‘Pepperpot’ alloy wheels supplied by Cosmic which would become a signature feature of the car. 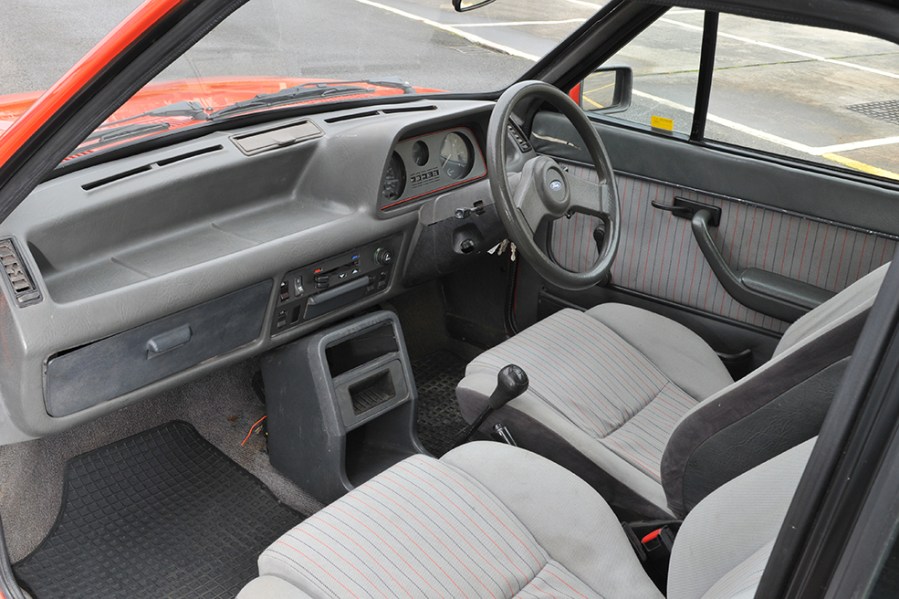 The rest of the package was simple parts-bin stuff: the plastic arch extensions, front spoiler and hatch spoiler were plucked from the ‘X Pack’ accessory brochure, while round headlamps replaced the square units found on cooking Fiestas and Escort XR3-style seats with red piping livened up the interior which was otherwise to Ghia spec with the luxury of a centre console. Screen-printed ‘fade’ graphics on body sides and a pair of driving lamps on the grille completed the package and it was a winner in the showroom.

Interestingly, the extra kit of the XR2 lifted its kerb weight to 839kg, which by modern standards makes it a featherweight but back then placed it surprisingly close to the larger, more powerful Golf GTI and period road testers of the day praised the Fiesta for its eager feel and sharp handling.

The impeccably thorough testers at Autocar even discovered that the XR2’s 50-70mph acceleration in top gear was significantly better than the GTI, although a maximum of 30mpg and a 7.5-gallon fuel tank was slated for giving the car a sub-200 mile range.

It’s interesting to compare the rave reviews of the Mk1 Ford Fiesta XR2 with the somewhat lacklustre reception afforded to its successor in some circles. The Mk2 gained the more modern CVH engine but its thrashy nature and the car’s smoothed-over styling meant it lacked the sparkle of the Mk1 in many ways. 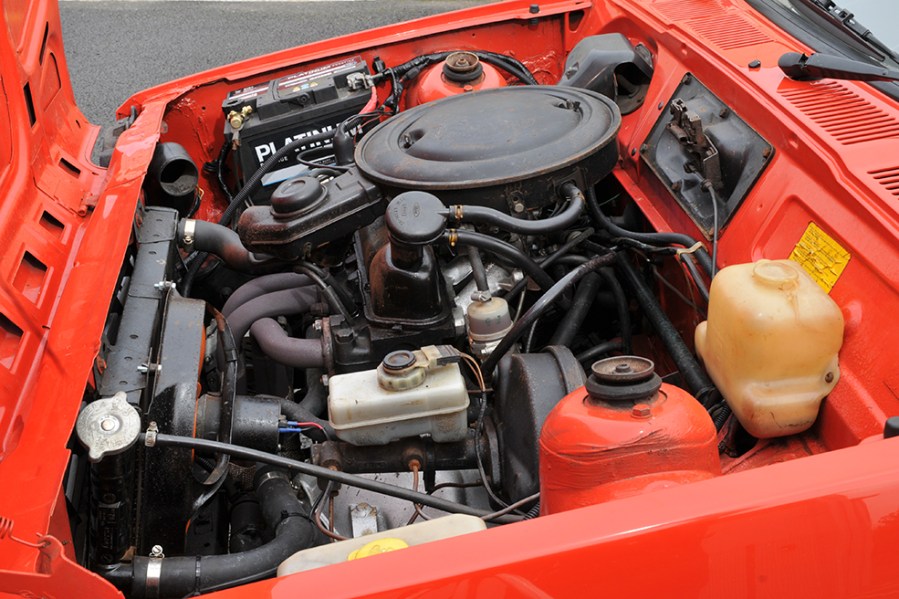 The short production run and the low survival rate mean that a standard Ford Fiesta XR2 Mk1 is a rare treat and we encountered this 40,894-mile example at a sale at Manor Park.

The chunky silhouette of Tom Tjaarda’s Mk1 Fiesta style is distinctive four decades on and in the Sunburst Red it really stood out on a winter’s day like a ray of welcome sunshine. An impression which continued as – with a touch of choke, naturally – the Weber-carbed Kent motor barked into life, its cheeky rasp taking me right back to the days when an XR-badged Ford could be identified from its exhaust note long before it appeared in view.

We’re used to hopping in and out of old cars but the Fiesta took me by surprise when I realised how modern it feels in some respects. Clutch and gearshift are both light and positive, while the non-assisted steering is unusually user-friendly for a car on six-inch wheels. Indeed, period road testers commented on how the system felt more positive at speed than the XR3, yet didn’t weight up so badly at parking speeds and it’s something I’d agree with.

From a standing start, the XR2 feels surprisingly eager, its short gearing contributing to its lively nature, although as speeds rise the acceleration tails off, while high-speed cruising was always hard on the ears courtesy of the four-speed box and gearing which produced 18.45mph per 1000rpm – or nearly 3800rpm at the motorway limit.

Motorways were never what the XR2 is all about though and it’s at lower speeds that its terrier-like nature shines through. In urban driving it’s an enjoyable car even in modern traffic, with the big glass area and responsive steering at three turns lock-to-lock making it easy to place. We didn’t have the opportunity to approach the limit in this example but experience has told us that the XR2 is a very predictable beast, tending towards gentle understeer when it does let go.

As a reminder of where the Ford performance hatch began, it’s a fascinating piece of history and comes recommended as a half-way house between the traditional classics of the Triumph and MG ilk and the more modern classics. Just try finding one though – and when you do, don’t be surprised at the ‘performance Ford’ tax you’ll have to pay.