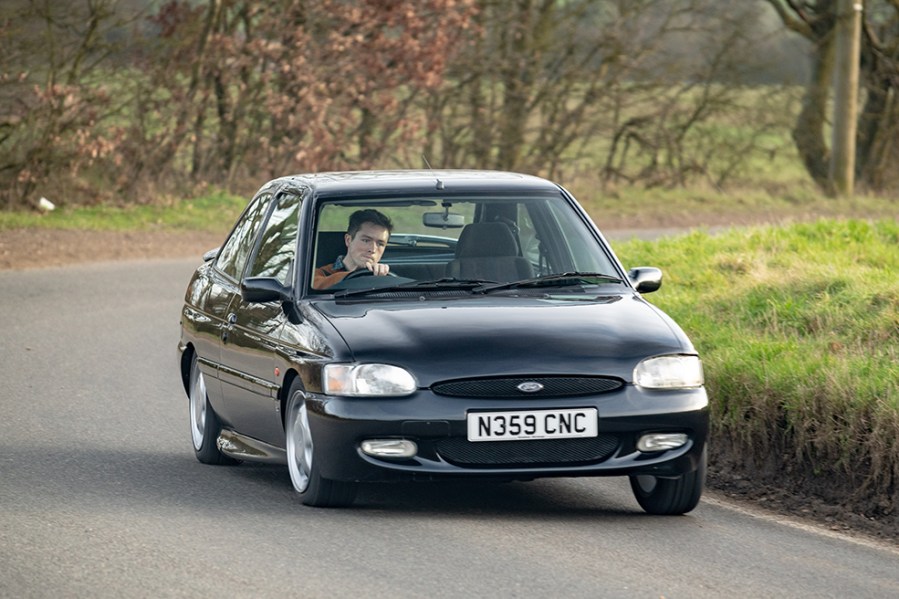 Something of a forgotten fast Ford, the Escort RS2000 4×4 has gained traction in recent years. We get behind the wheel

After the go-go 1980s of RS Turbos torque-steering past speed cameras and Peugeot 205 GTIs snaking into hedges, the hot-hatch market appeared to cool off for the 1990s. But as today’s modern classic genre gains pace, these cars once dismissed as too slow, too safe and altogether too conservative to be worth getting excited over are shifting in place.

The Peugeot 306 GTI and Renault Clio Williams were always at the top of the pile for their low kerb weights and feisty 16-valve engines. Together with the perennial Volkswagen Golf GTI, they’re now moving up from the £1500 bit of fun to the region above £5000 where collectors take notice. The market looks set to heat up even more as people realise that the involving hot hatches of this era are unlikely to ever return. But where does that leave the Ford Escort RS2000 4×4, a car long laughed at from Peugeots in hedges and turbo hatches in court car parks?

Somewhere in the shadows would be the answer. But it’s certainly more exciting than the Mk5 XR3i, which provided an uninspiring 115bhp or an even less inspiring 105bhp, as an option to appease the insurance companies. The RS2000 was launched in November 1991 and, like the RS Escorts before it, was an exercising of Ford’s motorsport muscle. The RS Cosworth, really a Sierra in costume, was making the headlines, but the 148bhp RS2000 also had rally sport ambitions. The car featured in its own one-make series rallying and circuit racing around the UK and in 1996 it even won the FIA F2 British rally championship, making appearances at famous locations in Ireland and the Isle of Man in the process.

Starting as a front-wheel-drive Mk5, a novel 4×4 model with a 36/66 front to rear torque split became an option in 1993 with the facelifted Mk5a, and this two-model RS2000 range continued into the Mk6 before it was finally discontinued at the end of 1996. The XR3i, meanwhile, was quietly replaced by the Si for the Mk6 introduced in 1996. Although the 4×4 model offered an infallible traction unique to its class, it did weigh the RS2000 down and so its performance was a victim of criticism. 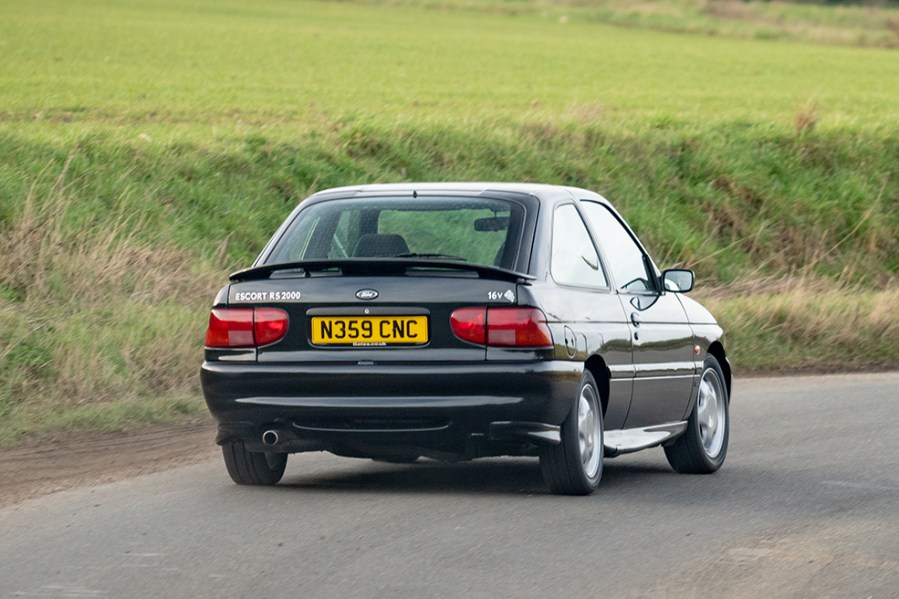 Those using the RS2000 for competition were also disappointed with the car, finding the DOHC engine (shared with the Sierra of the time) resistant to tuning. Ford’s support for the one-make series dissolved and it closed after just two years, while many privateers also found other cars.

While priced on a level with rivals of the same power, the RS2000 never really inspired the great sales of its spiritual predecessor, the Mk3 RS1600. Around 2000 of the front-wheel-drive cars were made and only 500 4×4 models made to qualify for homologation (88 of which were unfinished cars made for motorsport). Particularly in 4×4 flavour, the RS2000 is one of the rarest Ford RS models ever made – the notable exception being the Mk2 RS1800. Of course, its rarity is more a product of its lacklustre appeal more than anything else.

However, what we know today is different to back then. We can look back at the Mk5 and Mk6 Ford Escort with more fondness, particularly since the roads are no longer littered with them, and the RS2000 hints at a performance renaissance that was brewing at Ford. The same engineers who developed the Mondeo, remade the Fiesta into a class-leading force, and set up the legendary Focus Mk1 had a hand in this car, particularly in the Mk6 form we have the keys for today. It is indeed in the shadows, but ahead of a golden era for Ford, which certainly does give it promise as a modern classic.

The Mk6 is even more subtle in its styling than the Mk5 was, restraining itself to the rounded mouldings of a bodykit and a rear deck spoiler. The Mk5 had polished split-rim alloy wheels, while the Mk6’s are a duller, painted finish, and gone are the distinctive bonnet humps of the earlier RS2000. In our car’s metallic black paint, however, the Mk6 RS2000 4×4 still cuts a confident shape. Its oval grille and rounded lights might give it a bit of a Bambi face but its three-door shell, bodykit and lowered suspension plant it to the ground with purpose.

The technical specification is all business. The RS2000 starts with a 2.0-litre, double overhead cam four-cylinder with 16 valves, of course, as well as a four-branch exhaust manifold and Ford’s EEC IV electronic engine management system. Power is 148bhp at 6000rpm and torque peaks with 140lb.ft at 4500rpm. The MT75 gearbox, also from the Sierra, is mounted transversely and features an uprated clutch. Stiffer springs, dampers, and thicker anti-roll bars were also fitted, revised for the Mk5a and, with its stronger structure, were made stiffer again for the Mk6. ABS was standard throughout. 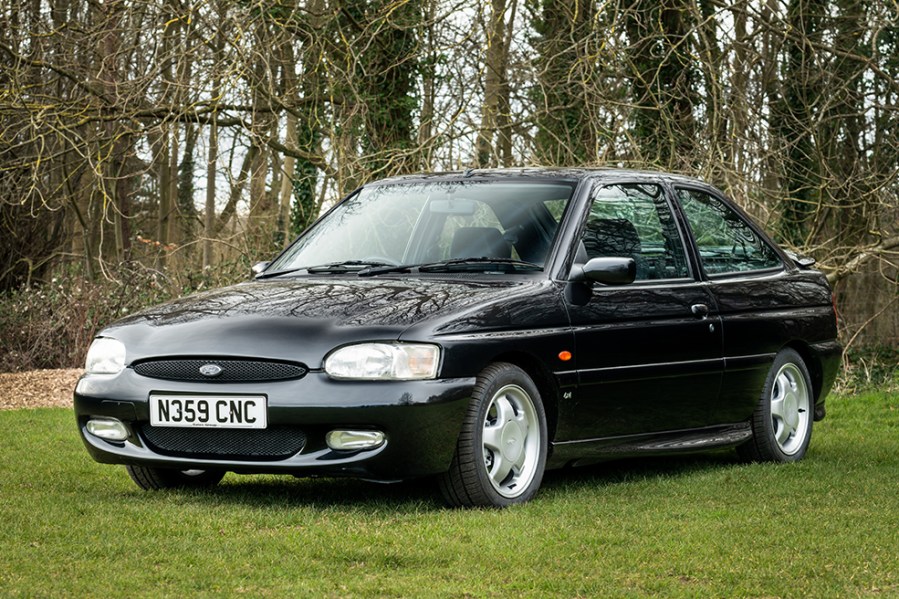 The 4×4 does weigh over 100kg more than the standard front-drive RS2000, but there’s more than just a centre and rear limited slip differentials to factor in. The RS2000 4×4 also featured a bespoke independent rear suspension to accommodate the rear drivetrain components, weighing more than the standard RS2000’s setup but providing greater control. An aluminium crossmember provided the necessary reinforcements at a minimum weight cost.

The 4×4 model also benefitted from heavier, but more powerful rear disc brakes. So while the 4×4’s performance was blunted, and more than the comparative 8.6 second and 8.3 second 0-60 sprint times might suggest, there’s certainly more to the RS2000 4×4 than just straight line speed and traction.

It’s a flashback to the mid-1990s as you step into the Escort RS2000 4×4, especially if you ever spent much time in Fords of the era. The smell of Dagenham’s plastics hits you with nostalgic impact, and the wild ‘Raven Flow’ fabric pattern blurs the eyes into a rose tint. It’s a vision of Ford’s rounded future in here, deliberate ovals made of light switches, the clock, and even parts of the door cards.

What really grabs the attention, though, are the fantastic Recaro seats, a great blend of Alcantara and Raven Flow fabric. They are as supportive and comfortable as they look, though they are mounted higher than I’d prefer. You sit almost above the dashboard, looking down at the white-backed dials.

Those famous first 50 metres tell you that this is a light, easy car to drive. The steering is positive and twirls the front end around willingly, while the gearchange flicks with well-oiled smoothness. It rides a little firm at first but, as speeds increase and the metres begin counting in their hundreds the other side of the RS2000 4×4 emerges. 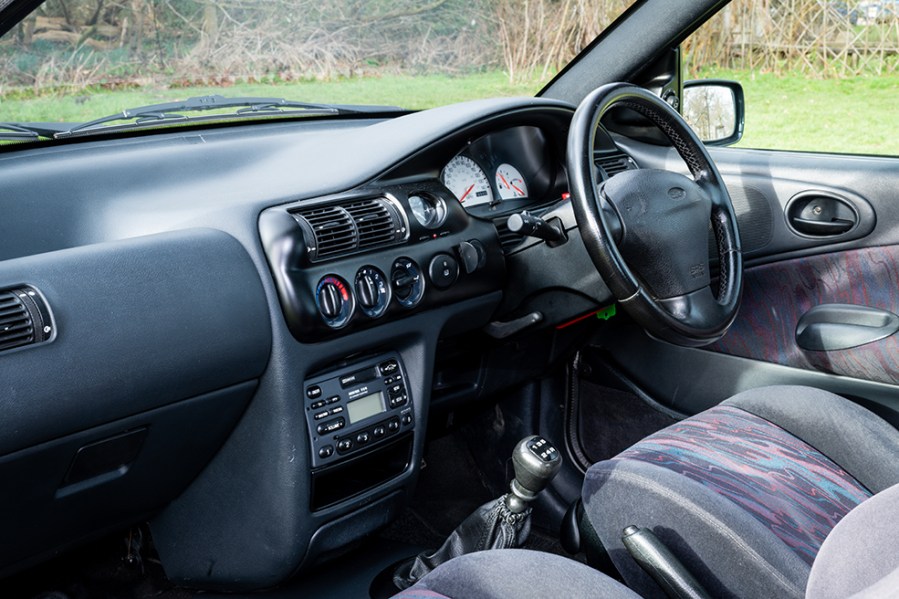 The engine is a cut above most Fords of this era. It hums with surprising refinement, helped by the Mk6’s improved structure and sound-deadening no doubt, and climbs up the revs with startling enthusiasm. It feels just as, if not more, energetic than the later Zetec generation of engines.

There’s even an exhaust note to enjoy, through a rorty 3000-4000rpm mid-range that develops into something more on-cam purposeful at the top end. The pedals are well balanced in their weights such that coming off the accelerator and onto the brakes can be easily judged, and the car scrubs off speed confidently.

Carry a bit into a corner with your foot still on the brakes and the car pivots delicately around the bolsters of those Recaros, showing that the Mk6’s stiffer front-end was one of the great improvements made to the RS2000. Using the fine steering and brakes to get the most from the front axle on corner entry allows you a small slide that’s prolonged slightly by the four-wheel-drive and rear limited-slip differential under full throttle.

It might have been a heavy car in its class at the time but today it feels light and nimble, only revealing its extra kilograms if driven back-to-back with front-drive rivals. It might not set your hair on fire, but would any 1990s hot hatch do so in today’s traffic? What counts is that there are glimmers of Ford’s performance stardom to come in the RS2000 4×4. This makes it a bit of an unusual member of the RS family, but a worthy one nonetheless.

But do you need the 4×4? From a buying and maintenance perspective, there are costs to account for. The rarity naturally adds an easy premium for sellers but, then again, there are some buyers who would prefer a front-drive RS2000. The range seems to be between £10,000 and £20,000, with 4x4s generally tending towards the top end of that. The four-wheel-drive system itself requires some maintenance, including transfer box oil changes every 10,000 miles. Failures of well-maintained units are much rarer than has been suggested, but if they do go replacement components are difficult to find.

Of course there will be maintenance issues to consider regardless of your choice between drivetrain options. Rust is becoming more common now, with the worst areas being the front footwell floor-pan, the inner sills and rear chassis legs. It’s also worth noting that the Mk6 was generally better protected underneath, while Mk5s suffer with corrosion around the fuel filler cap. The engines are pretty tough and use timing chains rated for 100,000 miles, though 60,000 miles is recommended by most specialists. Also note that water pump replacement requires moving the engine to the side. Be very wary of abused gearboxes, with the second to third gearchange normally first to baulk. There are also reports of engine bay wiring beginning to degrade but, just like the Mk5 and Mk5a fuse boxes that are vulnerable to water ingress, replacement is easy and cheap enough.

With values as they are, it seems likely that the remaining RS2000s will be cared for even better than the contemporary rivals that were once considered superior. The RS badge carries a lot of weight, even on a car that many have said to be a dull drive. Fact is, the RS2000 4×4 is a whole lot of fun.

However, it’s starkly obvious that the market is full of sub-30,000 mile examples that have simply been put in storage for the collectors of the future. Meanwhile the Peugeots, Volkswagens and Renaults have run riot, and only occasionally into hedges and police compounds. If the nostalgia of the RS2000 appeals to you, we say go ahead and get one. Just take it out occasionally and remember it better than it was.