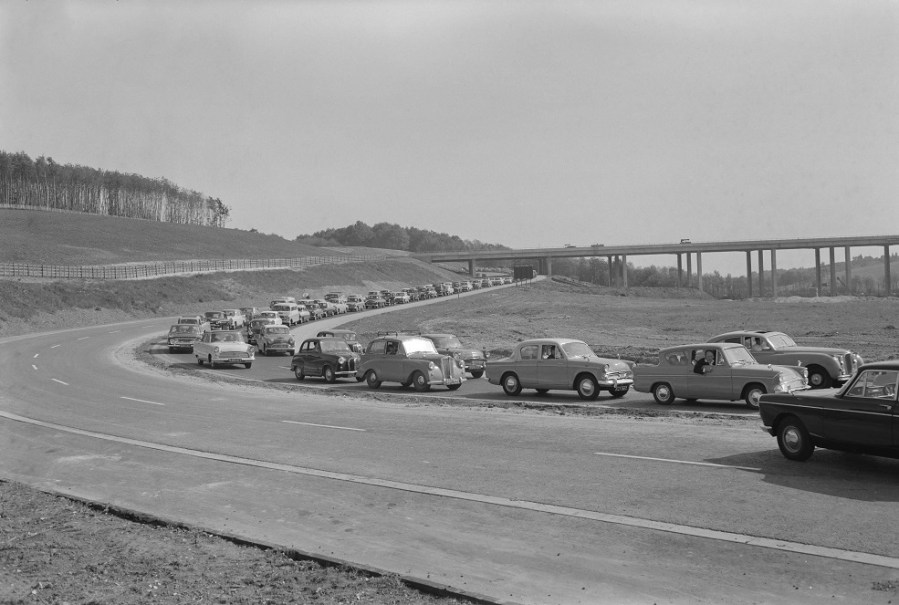 Here is a scene that was all-too common in the 1960s – a queue of stationary cars trying to get to the seaside on a sunny June day. Frustrating for the drivers, taxing for many a cooling system, but great for car enthusiasts 50 years hence!

The location is the Ridgeway Interchange, better known as Junction 5 of the M2 in Kent, three miles southwest of Sittingbourne. This was the first summer that the M2 was in operation with the opening of the stretch between what is now Junctions 2 and 5 – the Ridgeway was the southern terminus and, on this summer’s day, the distinctive viaduct lifting the carriageway over the valley was not open to traffic as the tarmac had not yet been laid on the other side. Until the southern stretch to Faversham opened in 1965, all traffic had to pile off the M2 here and rejoin a road network little changed since the medieval period.

This was a regular problem in the 1960s as the road network was upgraded – building a new, fast, high-capacity route in one place was all well and good until you had to plug it into the rest of the system somewhere else. The M2 had been built to relieve the terrible congestion in the Medway Towns as traffic heading for the coast crammed through on the old A2, following the course of the Roman Watling Street. So while the residents of Strood, Rochester, Chatham and Gillingham were breathing a sigh of relief, there was no such joy for those in the towns and villages a few miles to the south.

The photographer has rather carefully positioned themselves to capture only the new-build motorway in all its glory. Just off to the right of the frame was a T-junction with a single-carriageway road from time immemorial running between Maidstone and Sittingbourne – this junction and the sheer weight of traffic trying to get down it is certainly the cause of the jam. Once they escape from the sliproad, the drivers would probably be crawling bumper-to-bumper until they reach Sittingbourne and pick up the old A2 again, bringing the town centre to near-gridlock. Watling Street itself would be little better until Faversham, when the traffic heading north for Whitstable, Herne Bay and Margate split off from that trying to get to Ramsgate, Dover and Deal.

There’s a good mix of typical family cars caught in the jam, but let’s start by noting the Austin A110 Westminster fleeing in the opposite direction. Then there’s a Ford 105E Anglia and (certainly not typical family motoring!) a  Jaguar MkVII at the front of the queue, followed by a Hillman ‘Audax’ Minx, a roofrack-fitted Triumph Mayflower and a Ford Mk2 Zodiac. Then comes an Austin A35 and, just visible behind that, a Morris 8E. Further back come a ‘Lowline’ Ford Zephyr, an Austin A55 Cambridge and a Ford Mk3 Zodiac, a Morris Minor 1000 and an early Vauxhall E-Series Velox. Without the benefit of a digital zoom function or a strong magnifying glass the remainder become difficult to identify, but we can see a Ford 100E Anglia, a ‘Farina’ Austin Cambridge/Morris Oxford, a few Ford ‘sit up and beg’ Populars, a Triumph Herald, a Vauxhall P-Series Cresta and, amazingly, just one solitary Mini near the back!